They came in thousands, walking countless miles, with provisions on their heads, prepared for the long haul. The steely resolve was evident on those creased, gaunt faces, that unless they received a written assurance from the powers that be, their agitation would continue. As far as the eyes could travel, one saw the green vegetation-covered gentle undulating slopes of the Bailadila mountains, beyond which rose the misty grey blue ranges, 41 km south- west of the Dantewada district in southern Chhattisgarh. The Bailadila Range, called so because it resembles the hump of an ox, rises in the Deccan Plateau. But the dark green forest cover and rocky interface belie the fact that Bailadila is an industrial area divided into two townships, Bade Bacheli and Kirundul (located around 29 km and 41 km from Dantewada respectively).

But what catapulted sleepy Kirundul and Bailadila in general on to the global steel map? Its rich iron ore deposits. The iron ore range within Bailadila extends for 40 km in length and 10 km in width across the hill-top and is regarded as one of the richest iron ore resources in the world, with 1,200 million tonnes (MnT) of high- grade ore strewn across 14 deposits. Indeed, the Bailadila complex contains in its bowels the world’s best grade of hard lumpy ore with a 66%-plus Fe content that is free from sulphur and other harmful materials. This ore has the best physical properties needed for making superior-grade steel. Of the 14 mines, three are being mined by NMDC. Deposit 14/11C and 11B are located in the Kirandul complex while Deposit 5, 10 and 11A are within Bacheli. In fact, Bailadila Deposit 14 is the ?rst large scale open cast mechanised iron ore mine in India which had been commissioned by NMDC in April, 1968. Bailadila Deposit-11C was commissioned in June, 1988.

But, it is the star-crossed Deposit 13, belonging to a joint venture of NMDC and Chhattisgarh Mineral Development Corporation of India, NMDC-CMDC Limited (NCL), set up in 2008, that is in the eye of a storm. As per reports, this mine has huge reserves of 326 MnT of high-grade iron ore with a clearance to excavate 10 MnT per annum. But the silence of the hills is deafening here essentially because beneath the semblance of peace are deep rumblings of protest.

NMDC’s shareholding in NCL is 51% while CMDC holds the balance 49%. Furthermore, NMDC had said in an earlier statement that NCL is the owner of Deposit No.13 and its mining lease is registered with the JV company. It had further said the land required for this project would be acquired in the name of the JV company and NCL shall only have the selling rights of iron ore produced from Deposit-13. 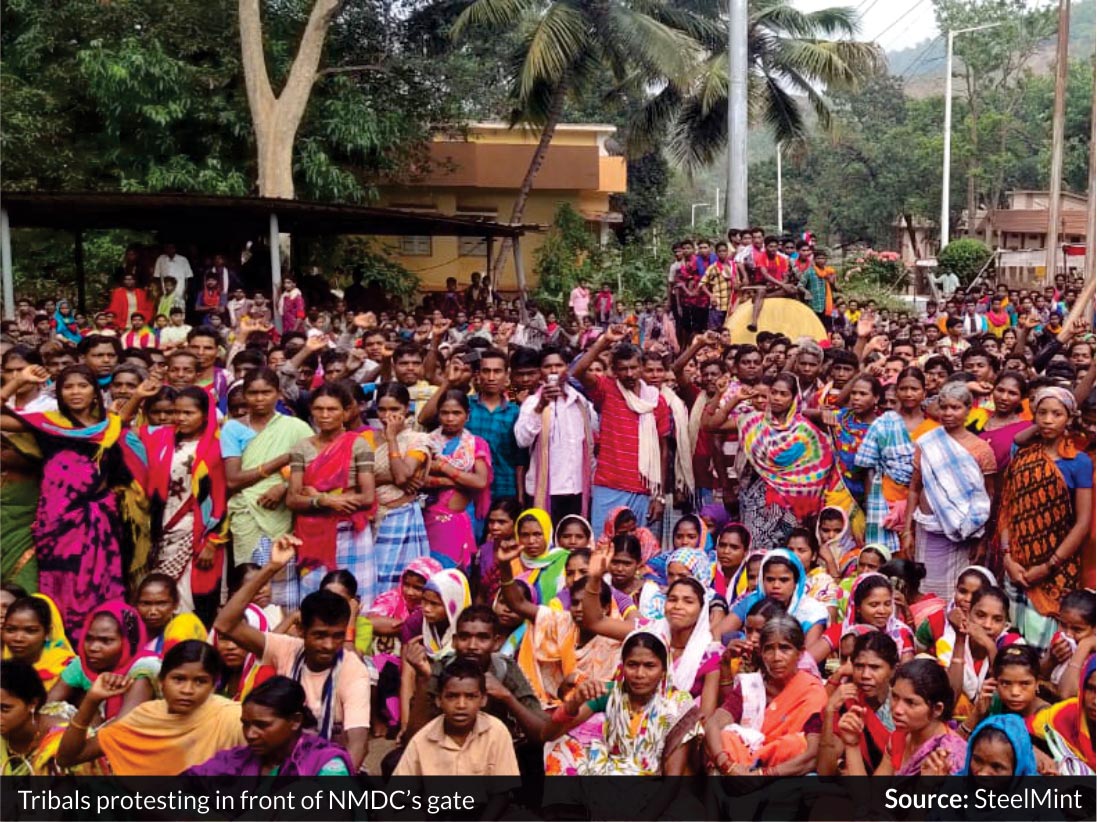 Since the Bailadila Range is part of Schedule V of the Constitution, it is governed by the provisions of the Panchayats (Extension to Scheduled Areas) Act, 1996, which makes consent of the Gram Sabha mandatory for undertaking any developmental work. NMDC thus subsequently conducted Gram Sabhas in July 2014, availed the requisite environment clearance in 2015 and forest clearance in January 2017. In 2017, the mining lease was transferred to the government-owned joint venture company NCL. In January 2018, at least 10 companies evinced interest in participating in the international competitive bid for development and operation of Bailadila Deposit No.13. The short- listing of bidders was done on the basis of the prescribed technical and ?nancial quali?cation requirements as per the terms and conditions of the tender. Adani Enterprises Ltd (AEL) was selected as the successful bidder through a transparent reverse bidding process. In late 2018, NCL selected AEL as the mine developer-cum- operator (MDO).
But before AEL could commence the excavation and mine development work, a large number of local tribals descended at the mine, demanding cancellation of the mining lease.

What Are Villagers Fighting For?

A closer probe reveals, the reason is not religious alone. It is true that Deposit 13, where NCL’s controversial mine is located, is revered by the tribals as the shrine of Pitod Devi, wife of nature god Nandraj. But the reasons are ecological too. The tribals, who live in this hilly area, are fighting for a right to live, the right to bequeath a green and healthy forest environment to their next generation too. They say intensive mining of Deposit No.13 will result in run-off of iron ore-laced water into their cultivation and cause ecological havoc. They also add that mining will not only lead to destruction and deforestation of 315.8 hectares of forest land in Bailadila but also leave trails of destruction on the hills, which they claim will be a sort of divine retribution.

The protests immediately received the support of political parties and other tribal groups. Talking to media persons at the agitation venue, Ajit Jogi, founder of the Chhattisgarh Janata Congress and the ?rst Chief Minister of Chhattisgarh, said: “I will sacri?ce my life but not let the Adani Group or anyone step in and dig up Nandraj Hill.”

He alleged that rules were overlooked in carrying out mining at Nandraj Hill, where tribals regularly offer worship. “It is our resolution not to let any shovel or spade touch the hill for mining. We will continue to protest against mining activities in the region,” Jogi added.

He accused the Centre and state government of violating rules to allow mining in the region. He said that a prior approval of the panchayat and Gram Sabha should have been obtained before getting into such an agreement. “The law says mines cannot be allotted against the will of native tribal communities,” he emphasised.

After a seven-day protest, that began on June 7, the state government announced a probe into the felling of trees in the area and ordered a stay on all activities in Deposit No.13.

On June 11, Chhattisgarh Chief Minister Bhupesh Bhagel announced in Raipur the state’s intention to ful?l the demands of the protesting tribals and ordered a stay on all mining activities in Deposit No.13. He said, “We have decided to investigate the Gram Sabha clearance. All activity will immediately be put on hold.” 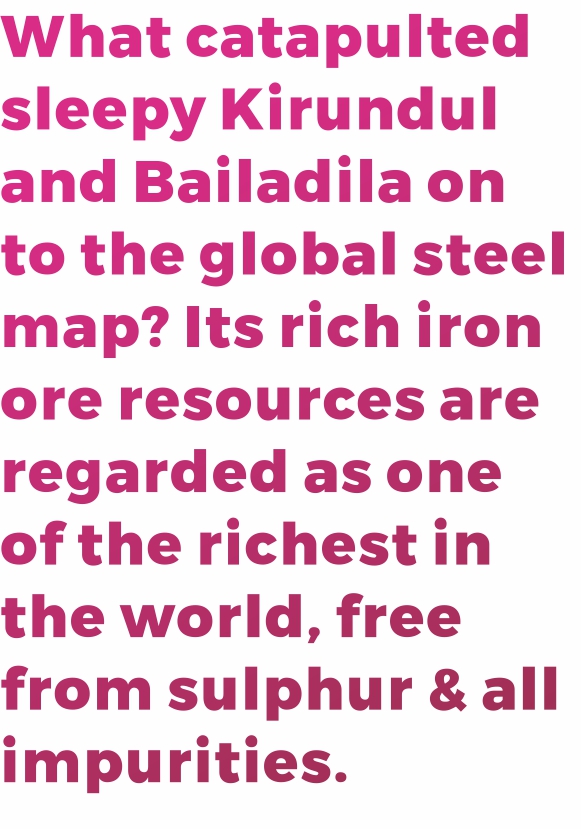 The CM also ordered an inquiry into the bogus clearance certi?cate acquired from the Gram Sabha and illegal felling of trees in the area. The decision came after Baghel met a delegation of ministers, including Congress MP from Bastar Deepak Baij and former Union Minister Arvind Netam. However, according to sources, the protesting tribals demanded a completion of the probe within three days while the government sought 15 days time to do so. For this reason, the villagers kept on protesting till June 13. Later on, agreeing with the government, the villages ?nally called off their protest on June 13, warning that if investigations into the matter were not ?nished in 15 days then they would restart the protest with even greater intensity. Subsequently, in a bid to inquire into the matter, the government sent a sub-divisional magistrate (SDM) along with other of?cials, on June 24, for parleys with tribal representatives. However, when village representatives found that Hiroli Gram Panchayat Secretary Basant Nayak was not present at the hearing, they refused to meet the government of?cials. They demanded a public statement of Nayak in Hiroli village itself.

Later, on the same day, after an improvised explosive device (IED blast) went off in the area, all of?cials returned. Thereafter, the SDM scheduled the next hearing in the SDM court (Dantewada) on July 12 and issued a notice to Nayak and the protesting villagers in this regard. At the July 12 hearing, Nayak appeared in court for submitting his statement but no one from Hiroli village appeared at the hearing. The Sanyukt Panchayat Sangharsh Samiti (a committee of tribals leading the protest) sent a letter to the SDM, requesting that Nayak be brought back to Hiroli village for recording his statement. Finally, on July 16, on the request of the Sarpanch (village head), agitating tribals traveled 15 kilometers on foot to Ambedkar Bhawan, Kirandul for submitting their statement to the investigation team amid high security. The SDM told media persons that the statements of those villagers, whose names are on the voters’ list, would be considered. There are 467 names on that list.

Wading into the controversy, an AEL spokesperson said: “… In 2018, NMDC CMDC appointed Adani Enterprises Limited (AEL) as a meremining contractor through a transparent competitive bidding process. AEL has not commenced its project yet and will initiate any activity only after all the mandatory requirements are met by the owner NMDC CMDC Limited. As on today, mining contractor AEL does not have any presence in Kirandul for mining purposes.

It is important to note that NMDC CMDC Limited owns the iron ore resources and AEL will provide support only as an experienced and responsible mining contractor. The Adani Group strongly believes in ‘growth with goodness’ and its commitment to the state of Chhattisgarh is evident from the community-oriented initiatives undertaken by its not-for-pro?t arm Adani Foundation. AEL and Adani Foundation are committed to replicating their inclusive and sustainable model of development of Sarguja district in Dantewada also.”

Meanwhile, the government-controlledd NMDC CMDC Limited is suffering huge losses every day as its mining operation at Deposit No.13 could not be started, post the massive tribal backlash.

Will Deposit No.13, true to its name, turn out to be unlucky for NMDC-CMDC? Only time will tell.