The construction equipment industry can expect a 40% increase in sales in the near future on the back of huge government spending on infrastructure projects. A corpus of INR 17 lakh crore is slated to be invested in road infrastructure alone over the next five years. While INR 2 lakh crore will be infused in roads this year, this amount will be increased to INR 3 lakh crore next year.
The Indian construction equipment market had seen an upswing till 2015 but the subsequent economic slowdown in India has made things difficult. The industry is passing through a relatively lean phase since the beginning of the current financial year and is struggling to get out of it, sources informed at the 10th edition of South Asia’s largest construction equipment trade fair, EXCON 2019, organised by the Confederation of Indian Industry (CII), in Bangalore recently.
Owing to a number of factors, including the non-banking financial company (NBFC) crisis, Indian general elections, and the extended monsoon, this year the construction equipment sector moved at a sluggish pace. However, most industry participants believe that things are going to look up in 2020, on the back of the impact of recent government measures announced to reboot the economy.
Large-scale projects like roads, inland waterways, ports, airports and infrastructure modernisation in cities propelled the demand of equipment and long-term prospects for India continue to be quite promising, said industry players. In Union Budget 2019-20, the infrastructure sector remained the focus area of the central government. Also, a huge chunk has been allocated for the development of railways, roads, highways, ports and airports.

‘Bring Down Cost Of Construction’
“The construction equipment industry can… expect a 40% increase in sales in the near future, as the government is injecting huge amounts of investments in road and other infrastructure projects such as waterways, airports, ports and Smart Cities. But the private sector should focus on bringing down the cost of construction and pollution,” said Nitin Gadkari Minister for Road Transport & Highways, Government of India, while inaugurating EXCON 2019.
He further said to achieve the Prime Minister’s vision of making India a USD 5-trillion economy, the government is embarking on major infrastructure and industrial projects worth INR 100 lakh crore.
“For the road sector alone, the Centre is investing INR 2 lakh crore this year. The amount of investment for next year will increase to INR 3 lakh crore. Within the next five years, the total government spend on road infrastructure will be about INR 17 lakh crore,” he said.
The minister urged the private players in the construction industry to focus on mechanisation, adoption of advanced technologies and global best practices, usage of LNG and bio-fuels and innovation in using wastes as raw materials in order to reduce the cost of construction and pollution.
Gadkari further said that, “The National Highways Authority of India (NHAI) is planning to operate about 2,000 petrol bunks. With such revenue generating activities, NHAI hopes to increase its turnover from INR 30,000 crore to INR 100,000 crore within five years. The additional income will be ploughed back into the construction of roads.”

He added: “When I took charge as the minister for road transport and highways, the construction of roads was happening at a pace of 2 km per day. But, today, it has increased to 30 km per day. And I hope, it will be 40 km/ day by end of March next year.”
“There are no financial constraints for infrastructure projects. Over 95% of infrastructure projects that the government has taken up are economically viable. But the issues involved in land acquisition remain a major hurdle. Currently, bank loans extended to the infrastructure sector come with not more than a 20-year replacement period. However, soon, banks would come forward to extend the loan repayment period to 30 years. I have had a discussion with the Reserve Bank governor recently in this regard. He said that RBI does not have a problem with banks extending the loan period to 30 years. So, I will be taking this message to the heads of banks and urge them to lend to infrastructure projects with 30-year repayment period,” he added.

Karnataka Emerging As Hub
Participating as the Guest of Honour at EXCON 2019, B.S. Yediyurappa, Chief Minister of Karnataka, said this southern state is an emerging hub for construction equipment, component outsourcing and design. The state presents huge business opportunities for the construction industry, as it is embarking on major infrastructure projects in roads and flyovers, industrial infrastructure and power.
The cost of doing business in India is set to come down as the government is keen on rebooting the infrastructure in roads, ports, railways, waterways by fast-tracking such projects. The construction equipment industry can face the tough market situation prevailing now by focusing on being ready for Industry 4.0 and reinventing itself, observed Vikram S. Kirloskar, President, CII, in his address.

‘Simplify Infra Funding’
Meanwhile, Amit Gossain, Managing Director, KONE Elevators, in a panel discussion at EXCON 2019 pointed out that there is need to work towards policies that simplify infrastructure funding and private investment in such projects.
In another panel discussion Asit Ranjan Sikdar, Vice President, Project Advisory and Structured Finance, SBI Capital Markets, mentioned that despite a slight dip in foreign investments, India continues to be an attractive destination for investment. He also said that there were several funding options available in India for the infrastructure sector. To give a perspective of the size and scope of infrastructure projects in the country, he cited ambitious projects like Bharatmala and Sagarmala.
Sanjay Mundley, Senior Vice President, Business Development, Mitsubishi Heavy Industries India, said that business benefits when a single technology is used for multiple purposes. He gave the example of the Electronic Road Pricing system used in Singapore. It is used in the areas of decongestion of traffic, parking management and law enforcement.

MoU between Karnataka, CII
During the inaugural session, a memorandum of understanding (MoU) was signed between Karnataka’s higher education department and the Confederation of Indian Industry on “Industry Institute Connect”. The MoU was signed between Dr Rajkumar Khatri, IAS, Additional Chief Secretary, Education Department (Higher), government of Karnakata, and Aman Choudhari, Chairman, CII, Karnakata. The MoU will focus on creating a taskforce of the state government and CII to facilitate skilling and developing teaching content in the construction equipment sector. 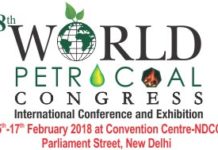