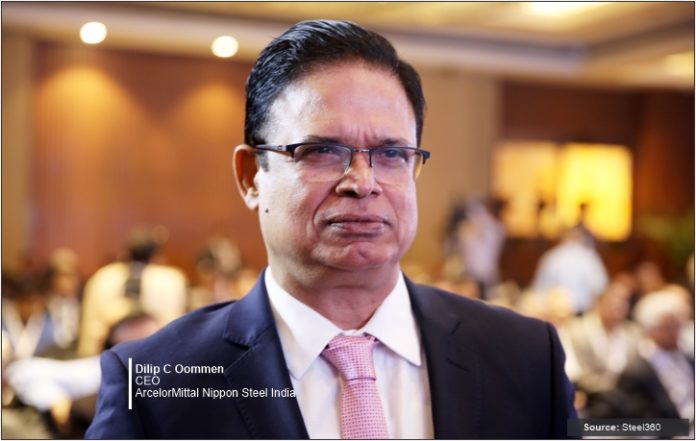 The world’s largest steel maker, ArcelorMittal, completed the acquisition of Essar Steel on December 16, 2019. This is a milestone for this steel giant since it gives Lakshmi Mittal, ArcelorMital Chairman and CEO, an entry into India, more than a decade after his first attempt. The company has set up a joint venture with Nippon Steel, called ArcelorMittal Nippon Steel India (AM/NS India), which will own and operate Essar Steel. ArcelorMittal holds 60% of AM/NS India, with Nippon Steel, the world’s third-largest steel maker, holding the balance 40%. Dilip Oommen, who has been with Essar Steel since 2003, has been appointed the CEO of AM/NS India. Steel360 caught up with him in Delhi a couple of weeks before the deal closure for a free-wheeling interview. Excerpts: 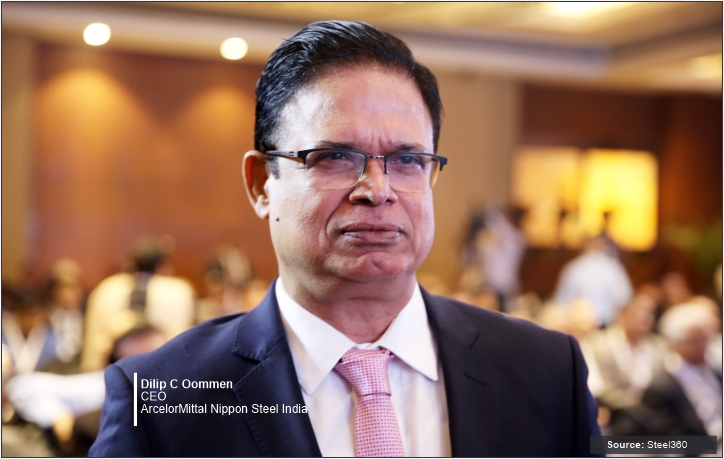 Q. There was a bloodbath in terms of Q2 results. But steel prices were hiked after seven months. There is a prediction of 6% growth in steel consumption. Do you think this growth is possible and will sustain going into the new fiscal?
A. Steel prices have taken a big beating and the margins have been under severe pressure. Prices of inputs have certainly not come down in tandem with the decrease in steel prices and, also, the dollar has appreciated. I mean, in the last few weeks, what was at INR 70 to the USD 1 has now appreciated to INR 72. There too, whatever inputs come in – gas, coke coal etc – all prices go up. There is a severe cost push. So, I expect the prices to go up further in December. The INR 2 change in the currency conversion is itself about INR 1,000 and so I expect prices to go up by that much. The import parity would likely go up by INR 1,000 per tonne.

Q. But will this price hike you speak of sustain into the new fiscal?
A. See, prices have already corrected. They have bottomed out. They cannot go down any further. If prices go down further, what will happen is production will start coming down. In fact, already a lot of plants have cut down their production volumes by 15-20%.

Q. Did Essar Steel opt for any production cut?
A. We are not producing to the level we can. We are producing 7.2 million tonnes (MnT). Our effective capacity is 8.4 MnT. Some small investments are required to be done to take it further. But the 7.2 MnT by itself is a milestone. Our next approach would be to take it to 8.4 MnT. And that should happen in about 18 months. 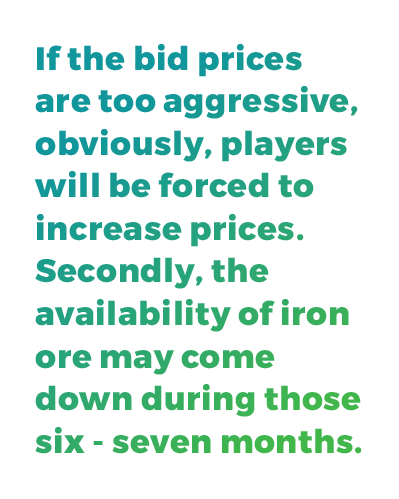 Q. Prices are always a function of raw material spreads. So, going forward, how do you expect such prices to behave?
A. There is an uncertainty in terms of raw materials, especially that coming in from Odisha from February-March, 2020, because of the auctions. This is what we are focusing very carefully on. One outcome is, if the bid prices are too aggressive obviously players will be forced to increase the prices. Secondly, the availability of iron ore may come down during those 6-7 months – that transition phase from the old owner to the new owner. The good thing is that the government is trying its level-best to make the transition as seamless as possible.

Q. Where does Essar Steel procure its iron ore from?
A. As far as the Odisha facility is concerned, we procure iron ore from the Odisha merchant mines. We have our own mine in a location 30 km away from Dabuna in Odisha, where we also have our beneficiation plant. We still do not have possession of the mine, and are waiting for the environmental clearance. The initial payments have been done. The reserves will be close to 100 MnT. We could be mining around 6 MnT per annum once we get its possession. 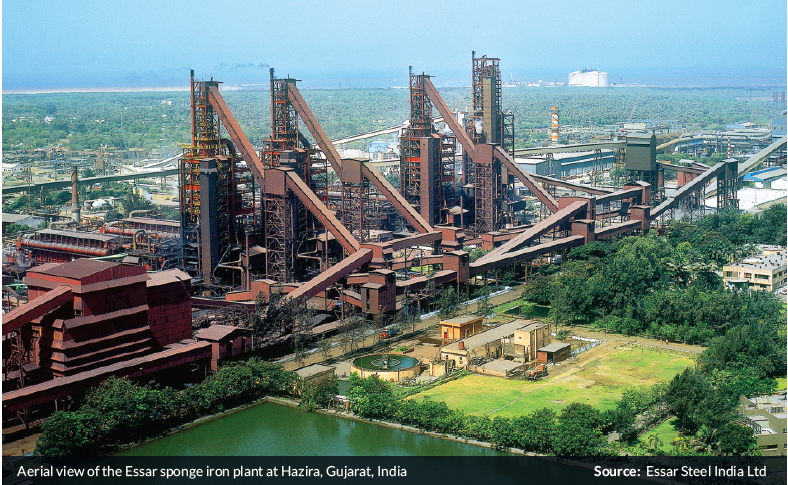 As far as our Vizag plant is concerned, we get our iron ore from NMDC.
At present, we are operating at 14 MnT of pellet-making capacity. In a year or so, we will be going to 20 MnT of pellet-making capacity, for which we will require iron ore fines. We use the entire pellets capacity. We do not have enough to sell, we require the entire amount. In the past, we did sell but not anymore.

Q. To come back to the auctions, do you think we could have done with a different iron ore policy, somewhat like the linkage auctions in coal?… The mines are changing hands from one private player to another…? Could the auctions give rise to cartelisation?
A. That is what we think. The previous owners may still retain their mines (smiles).
Let us ask ourselves why is the auction process taking place? There have been enough of scams etc. There are the plus and minus points.
The plus point is that the government has instituted a transparent process and it cannot be more transparent than putting up an auction. Anyone interested can participate.
Yes, there are some ground rules, for instance, a stipulated net worth, captive users require to have an end-use etc.
The disadvantage would be that if the bids get too aggressive, this is ultimately going to reflect in higher iron ore prices, which will result in higher steel prices.

Q. Remaining on the policy aspect, is there need for a relook at the iron ore policy because we export around 12 MnT and import around the same amount, leading to a drain on foreign exchange?
A. Pellets are a value-addition. Curbing iron ore exports makes sense. But, once you are value-adding, why should you curb?

Q. But, are pellets truly a value-added product – we just agglomerate them?
A. It does not matter. Value is not just in terms of processing but also in terms of realisation. We are adding in rupee terms to the product. We must see how much is the differential between pellets and iron ore. It is around INR 2,000 per tonne in favour of pellets.
But, having said that, players do not have enough of pellets. We are not exporting! We don’t have enough to meet our own demands.

Q. To come back to consumption and demand, auto, construction, real estate sectors have not been doing well. So, how do you see demand unfolding, going forward?

A. There has to be a big push on the infrastructure front. The government has a clear intent to boost infrastructure and obviously once that happens there will be a lot of consumption. The construction industry has to pick up as well since this sector is a major consumer of steel.
The silver lining is that the automotive industry seems to have picked up to some extent. October sales in the auto segment have been better than that in the same month last fiscal.

Q. But there were a few fundamental reasons for the drop in auto sales, one of which is the wait for e-vehicles. So, will the auto upturn sustain?
A. See, if consumers are waiting for e-vehicles then it will take some time for the infrastructure to support the same to come up. But, there could be other issues as well, may be, finance, the culture of hiring cabs from aggregators, especially by the newer generation which seems reluctant to invest in vehicles.

Q. Global steel demand in developed economies is likely to stagnate in 2020, as per worldsteel predictions. In that case, do you think Indian companies should focus more on fuelling domestic market rather than exports?
A. Hundred percent. That is the sustainable way forward. If we keep on depending on exports, short-term, yes it might work to reduce the supply within the country. But, eventually, we MUST increase the demand within the country so that domestic offtake goes up.

Q. We saw EBIDTA margins contracting 420 basis points in the first quarter of the current fiscal… How are margins likely to be in the last quarter and going into Q1 of the next fiscal?
A. There is only one answer… the industry will have to take a look at the sales and marketing strategy, it will have to brutally cut down on costs and this is the way to go forward. I think we will reach there with some government support. We all talk about energy, green steel etc but the government has to encourage the pricing of natural gas. There is a legacy pricing that needs a relook. But the steel industry requires natural gas. That is the way one can produce the incremental steel to reach 300 MnT by 2030 and, at the same time, one can preserve the environment. Natural gas is the best fuel one can have. So, there are a few areas where support can be made available. I talked to the steel minister – he is aware of this issue and is trying to find a solution – he has visited Russia, Qatar etc. As we talk, the difference between long-term gas pricing and what is available in the spot market is USD3-4 per mmbtu – it is too high. I must add that the steel minister has been helpful in sorting several nagging issues plaguing the steel industry.

Q. Can the NCLT proceedings lead to a kind of a monopolistic landscape emerging in the future – with only the players with financial muscle wielding monopoly over raw materials, easing out the smaller players in terms of production etc?
A. I am not in unison with this idea. See, in the 1990s, when we talked about opening up the automotive industry to outside technology, what happened is that the strong survived and are still doing well. Look at the massive improvements the auto sector has undergone. Otherwise, we would have still been stuck with a few domestic models!
Similarly, I feel, world class players coming into India will result in healthy competition. This scenario will bring in the top-class technology that India needs.

Q. Essar Steel mainly makes flat steel. So, is it looking at entering any other segment in future?
A. As of now, we are looking at flat steels. In future, may be, but right now, flat steels.

Q. If we do a rewind of 2019, what were the challenges and enablers?

A. The biggest challenge the steel industry faced in 2019 was the slowing down of the global economy and especially in India. We know that economy trends and steel consumption go hand-in-hand. When an economy slows down, naturally steel consumption also comes down. If you want to know the state of the economy, you just need to look at steel consumption trends. So, we have been affected.

However, there are now signals of improvement. Among the enablers there have been some changes in policies that have helped. See, RCEP would have meant China coming in and we know what could be the results. So, the RCEP move is good for the economy and steel industry. 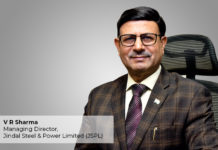