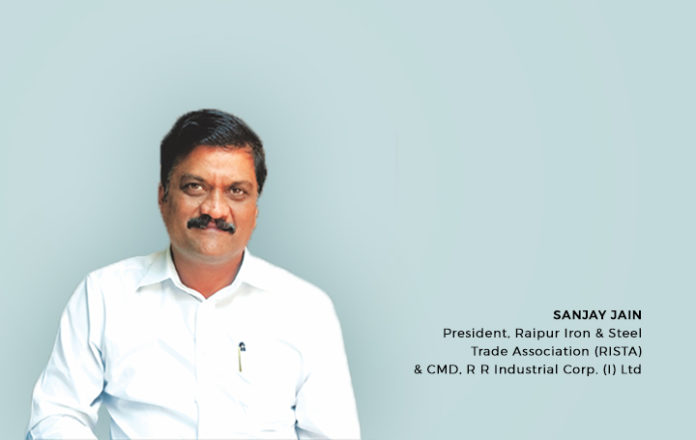 There is no premises number. You just enter Telghani Naka and ask anyone. They will show you where my office is located. There is a signboard outside,” Sanjay Jain, President, Raipur Iron & Steel Trade Association (RISTA) and Chairman and Managing Director of R R Industrial Corporation (India) Limited, bellowed into the phone. Soon enough, we were braving through the dry, mid-day 45 degrees heat of Raipur that assaulted our skin and formed a sheath of hot air over our nostrils before we hastily covered up our faces for protection from the sun.
The garrulous cabbie was a big help. As we entered Telghani Naka, he started enquiring around. Nobody seemed to know. We realised we were searching down a wrong street. We eventually inched back into a narrow but busy lane that looked like the loha patti of Raipur. It reminded me of the Burrabazar or Maniktala loha patti in Kolkata. It had the same look typical of a wholesale trading hub. The dusty and cacophonous lane was lined with outlets that dealt with all kinds of secondary steel products apart from the sundry eateries and tea stalls. We drove slowly, peering on either side. Finally, to our joy, one of my colleagues spotted the R R Industrial Corporation Limited signboard to our right.
Jain’s office is a functional affair. He greeted us with a welcoming smile, the previous apprehension over meeting a strange journalist dissipated to a large extent, as we settled down for a chat in his small but well-appointed chamber. Extremely well-informed on the steel industry’s state of affairs, Jain readily warmed up to the topic. He proudly announced that Raipur is the second Mandi Gobindgarh of India. In fact, he added, Raipur’s is among the biggest iron and steel trading mandis within the country and over time it has grown to even surpass Mandi Gobindgarh in stature. 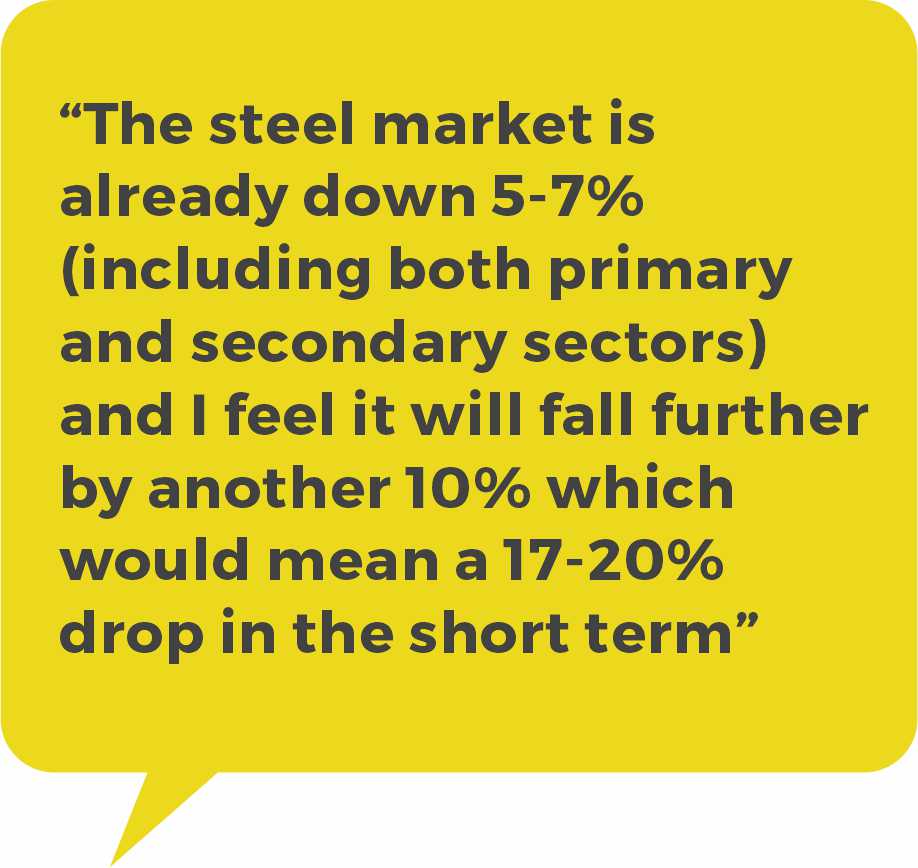 Forty-eight-year-old Jain had been an advisory member in the Ministry of Steel from 2004-2014. During this tenure, he advised the government of the day on matters relating to the planning and development of the iron and steel sector, including segments like ferro alloys and refractory. Jain has also provided assistance towards the drafting of key government documents like the National Steel Policy, 2017, Working Group on Iron and Steel and Working Group on Coal. He has contributed towards the formulation/amendment of policies related to exports-imports, duty drawback rates and a host of other areas riding on his more than 25 years of experience in manufacturing, trading, and exports and imports of iron and steel.

Steel Outlook
When we asked him how the secondary sector, including the rolling mills and sponge iron units, in the Chhattisgarh region, performed in the recently-concluded financial year 2018-19 (FY19), he informed that the overall performance of RISTA’s members improved significantly. On average, all the member companies experienced around 50% growth but there were several factors that helped prop up the numbers, he confided, and these included good support from the international market and the minimum import price (MIP) as well as reduced dumping from China.
Last fiscal, in the run-up to the general elections in India, demand for steel had been high because of the ongoing infrastructure development projects. However, Jain revealed, now that the elections are over, demand for steel is declining. “Since the declaration of the Lok Sabha elections, steel demand has reduced a lot,” he informed. 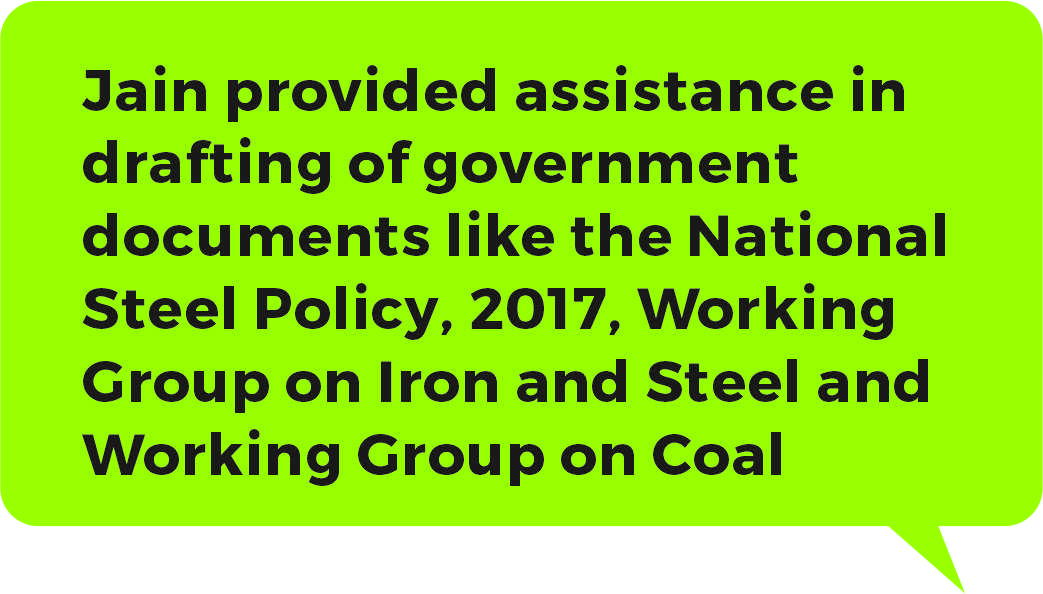 In that case, how did Jain see the demand for steel in the coming days? His faced clouded over as he said: “The way steel demand is falling, I don’t think any correction is going to happen soon. There is no MIP support and in any case the market slows down post-election. The international market is also not showing any signs of improvement. All across India, the steel market is already down by 5-7% (including both the primary and secondary sectors) and I feel it will fall further by another 10% which would mean a 17-20% drop in the short term (over the next three months or so),” he observed.
Jain made an interesting point when he said that post-election, there will be a lull in infrastructure project awarding for at least a year. The reason? “There had been a spate of project awarding in the period preceding the general elections with the government releasing a large number of tenders. As a result, several infrastructure projects had got off the ground. But now, I feel, post-elections, no new work will be undertaken in the coming one year,” he said, adding that, furthermore, India’s real estate sector is very slow at present,
But he rued that increasing imports from China impacted traders in Chhattisgarh. “Yes, any import of steel from China directly impacts our trading here. India has surplus steel production and there is a huge gap between demand and supply. Today, if all Indian steel-makers start producing in full capacity then the entire steel industry in the country will be in distress,” he warned. 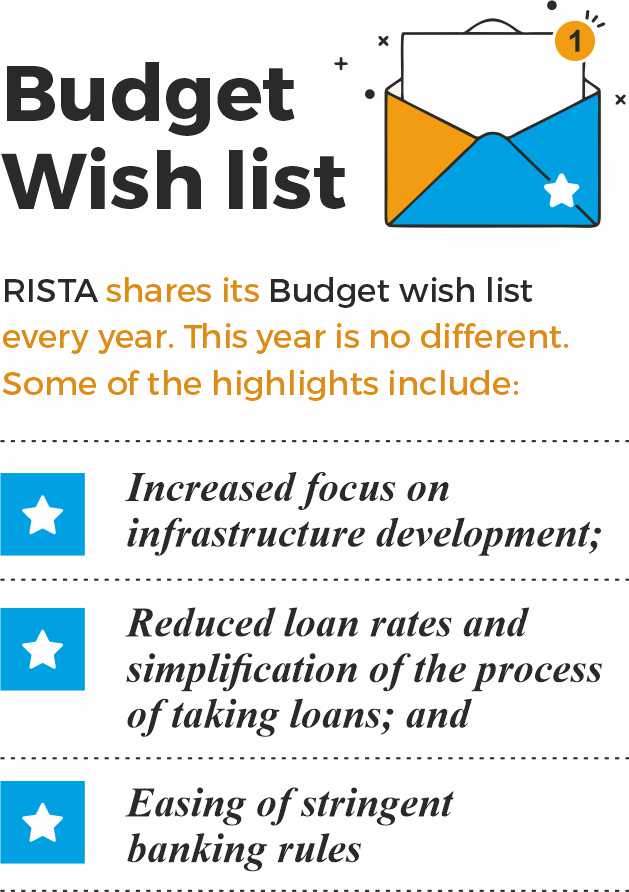 RISTA
Jain’s face creased into a broad smile when we wanted to know more about RISTA. Set up in 1991 as a body for furthering the interests of the iron and steel trade in Chhattisgarh, it has been busy strengthening the rista (relationship) between its members. “Its mission is to provide support and guidance to the iron and steel traders in Chhattisgarh. At present, RISTA has over 230 members on its rolls and branch offices in 18 states across India,” he informed. The profile of the association’s members is diverse. Some own rolling mills, others have sponge iron units while many are specifically focused on trading. RISTA’s members operate on a pan-India basis, supplying to large integrated players and to infrastructure projects. They also supply plates for pipe- making that are used in irrigation.
“The steel manufactured in Raipur is being sold and consumed across India. This is only possible through trading. RISTA works as a mediator and bridges the gap between the trader and manufacturer. Moreover, it acts as a facilitator for funding. For instance, timely availability of numerous items, including raw material etc, is very essential for operating a steel plant successfully. For this, the mill owners buy various items on credit. Here, RISTA plays a very crucial role in facilitating availability of finance. We help in coordinating with banks to make the overall trade smoother,” elaborated Jain.
Importantly, the association acts as a facilitator when a shortage in raw materials like iron ore and sponge iron is experienced by its members, by taking issues up to the ministry level.
RISTA also plays a key role in resolving trade disputes between its members and outsiders. Say a customer has blocked the payment of any of its members, RISTA deals with such cases at the association level. In case, the matter is not resolved, RISTA then blacklists the customer and other members in the organisation too stop trading with the errant party. “RISTA protects its members from getting cheated. Because of RISTA, no outsider can cheat Raipur steel makers easily,” Jain emphasised.
That apart, RISTA, true to its acronym, helps in resolving internal trade disputes among its own members too.

R R Industrial Corporation (India) Limited
Jain, who holds a bachelor’s degree in commerce from Pandit Ravishankar University, is also the Managing Director of R R Industrial Corporation (I) Limited.
Shree Shyam Rolling Mills, which is a part of the group, has a production volume of 3000 tonnes per month. However, the group is primarily focused on trading which accounts for over 90% of its turnover. When not dealing with iron and steel, Jain’s second love is social service, which has culminated in a hospital in the state of Chhattisgarh.
Talk of forging relationships…