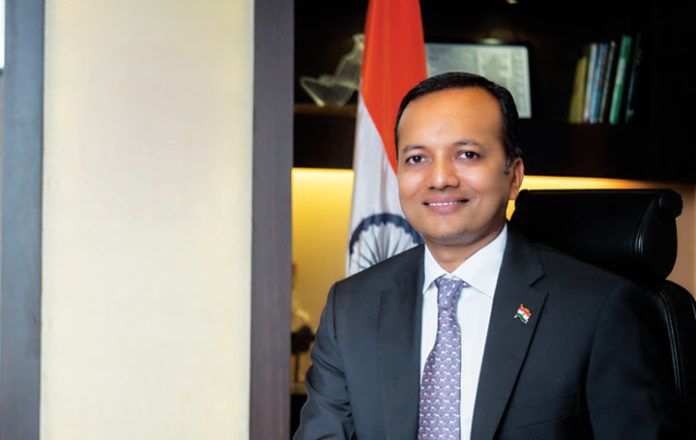 The resurgence of Jindal Steel & Power Ltd (JSPL) began from its Angul steel plant operations from October 2017 with the successful commissioning of the blast furnace that has taken the plant capacity to six million tonnes per annum. The company was not having a successful run for past few years, had its share of challenges. The company’s down graph has picked up in the past few months and it all goes to the enterprising spirit of Naveen Jindal, Chairman of JSPL.

Recent development of JSPL, when it bagged 20 percent of Rs 2,500 crore global tender by Indian Railways to supply long rails.  Supplying rails to Indian Railways is like a “dream come true”, Naveen Jindal. This became the first private company to supply rails to the railways.

JSPL witnessed leaps & bounds of sales that is the standalone steel sales stood at 1.19 mnt, up by 46% on year on year basis and so goes its pellet plant which recorded superlative performance by producing 1.76 mnt of pellet during Q1 of FY 2018-19. Company’s standalone crude steel production stood at 1.22 mnt, up 36% Y-o-Y.

Few months back in an interview with Steel360, Mr. Naveen Jindal talked effervescently on the revival of JSPL by removing the stop gap for the growth of JSPL.

What in your opinion has been the most significant factor in JSPL’s prolific revival story?

The cancellation of Captive Coal Blocks and payment of additional levy of around Rs. 3500 crore had a significant impact on our operations from 2014-15 onwards. Soon after, the domestic steel sector faced significant pressures from rampant dumping by some international players. Likewise, with hardly any new PPA’s coming in the market and merchant power market seeing prices fall to below-cost levels, power sector too underwent a sluggish phase. Incidentally, these factors came one after another, at a time when JSPL was in midst of a significant capacity expansion exercise. The capacity expansion program we started in 2010 has increased our steelmaking and power generation capacities by over 3 times, as on date.

If I were to identify one single defining factor for JSPL’s turnaround, it is the dedication and commitment of the 50,000 strong workforces and over one-lakh families in the JSPL ecosystem to work towards the vision of our founder Chairman Shri O.P. Jindal. The quest to participate in Building a Nation of Our Dreams by Making in India fuelled a series of initiatives like operational excellence, cost optimization through innovations, and above all successfully completing the entire expansion blueprint despite challenges from multiple fronts.

With Angul project up and running, how soon can we see JSPL rising in the national ranking & what all product baskets will be increased post-expansion at Angul plant?

At Angul, JSPL has created an Island of Excellence, comprising of some of world’s most-advanced and largest steelmaking facilities.  The 6 MTPA Integrated Steel Complex was initially envisioned as India’s first and only steel complex to make steel from purely swadeshi raw material. We had to do some course corrections and the latest addition, the 4 MTPA Blast Furnace – India’s Largest – has come at a remarkable speed and lowest costs as compared to Blast Furnaces of similar size and scale.

The Integrated Steel Facility at Angul has flexibility of both Blast Furnace and Direct Reduced Iron (DRI) routes. On the forward integration front, Angul plant would be producing both Flat and Long products. The 1.2 MTPA Plate Mill at Angul is the most advanced facility in the world, capable of producing plates of upto 5-meter length. The 1.5 MTPA Bar Mill is worlds largest and most-advanced Bar Mill, which will cater to the strong market demand for Jindal Panther TMT Rebars. We aim to gradually increase the capacity utilization in line with the market scenario.

India offers a significant opportunity for steel production in line with the National targets of creating 300 Million Tonnes Per Annum production capacity by 2030. The current per capita consumption of steel in India at 60 kg is amongst the lowest in the world and lags behind the global averages of 216 kg.

Do you see the target of tripling domestic steel production by 2030, as part of the National Steel Policy, farfetched?

In a country of 1.25 Billion, where the current per capita consumption stands at 60 Kg, there is the significant scope of growth to be able to come at par with developed economies. It is always better to have challenging targets than those that can be easily achieved. Introduction of progressive policy measures to make the domestic steel industry more competitive in the global arena can act as a facilitator for the achievement of the production capacity targets in line with the National Steel Policy.

Indian steel production is rising higher than the consumption, do you see exports increasing or may be inefficient capacities shutting down?

In today’s hyper-competitive scenario, one has to constantly remain efficient and keep enhancing efficiencies to be able to survive and grow. Steel exports from India saw a noticeable increase in last fiscal and should continue to trace the same path this fiscal too.