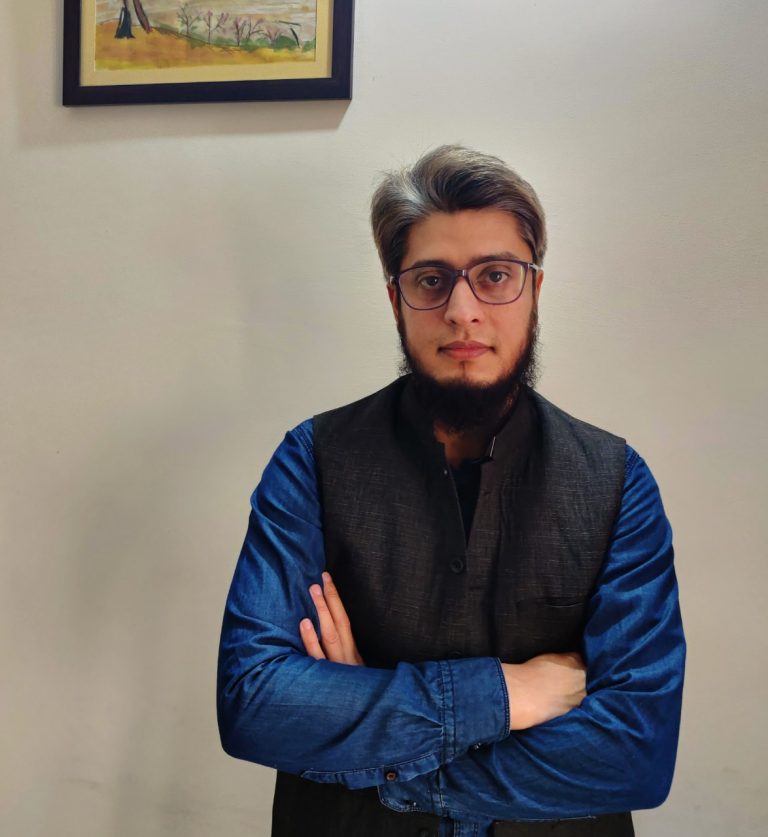 India’s experience with regional trade agreements (RTAs)/free trade agreements (FTAs) has not been very encouraging over the years. The country has recorded a trade deficit in all major trade agreements with the only exception of the South Asia Free Trade Agreement (Safta). Based on different studies, it was found that India’s exports to FTA countries have not outperformed overall export growth or exports to the rest of the world. India’s overall merchandise trade deficit with the Association of South East Asian Nations (Asean), Korea and Japan has widened significantly in the post-FTAs period and has remained one-sided from its inception till date.
In terms of steel, Japan and Korea pose serious challenges for the Indian steel industry. Both the countries have large surplus capacities in steel making and also have very high exports-to- production ratio. It was found that exports of semi-finished and finished steel products as a percentage of crude steel production is recorded to be as high as 40%. On the other hand, the scope for other countries to export steel products to Japan and South Korea is very limited. Majority of the forecasting experts believe that Japan and South Korea have witnessed demand saturation, where the demand for steel products is expected to decline in both the medium and long terms.

Fig 1, (Value in million tonnes) | Source: Author’s calculation based on data from the World Steel Association

Fig 2, the Balance of Trade (BoT) in steel products has deteriorated since the inception of the FTAs with both Japan and Korea.
With respect to Asean, India has a surplus trade in steel products. However, there are concerns with respect to the compliance with rules of origin and high Chinese investment in steel plants in Asean countries. Apart from that, India has a disparity of tariff concessions with Asean. India has reduced its duty to nil on all imports from Asean under Chapter 72 (Iron and Steel); however, Asean countries have not reciprocated with the same treatment for exports from India. This disparity of duty concession has resulted in a disadvantage for exports from India to Asean.
It is also argued that more than 90% of the imports from the FTA partners (specifically from Japan and Korea) are within the capacity and capability of the Indian steel industry and imports are purely a fallout of price differentials, as almost all of the steel products attract zero duty under these preferential trade agreements.
Due to the significant tariff differential between FTA and non-FTA partners in the country there exists a strong possibility of price arbitrage. In India, the FTAs have offered market access at a tariff arbitrage ranging between 10% to 12.5% vis-à-vis non-FTA countries. For instance, currently, the tariff arbitrage for HR coil imports from Japan/Korea works out to USD 98 per tonne, (based on the import price of HR coils [3mm, SS400] South Korea origin at USD 785 per tonne1).
Apart from the significant negative trade balance, the need to re-negotiate or terminate the existing RTAs/FTAs with Japan, Asean and Korea also arises due to the following factors:

The Indian steel industry is considered to be highly competitive up to the factory gate. In 2016, World Steel Dynamics ranked India second in terms of cost of conversion of iron ore to steel, after Ukraine. Indian mills were found to be more cost efficient in converting iron ore to steel than their counterparts in China, Japan or Korea. 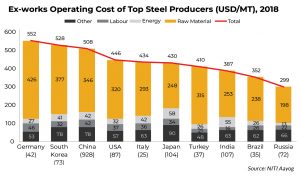 Despite being more efficient, India is still saddled with various structural deficiencies in the form of high cost of finance and power, cost of logistics, incidence of various non-creditable taxes and duties. All these deficiencies cumulate to a cost disadvantage of approximately USD80-100 per tonne as per NITI Aayog. Given this substantial cost disadvantage, most industry experts believe that there is a need for a level playing field for the Indian steel industry vis-à-vis imports. 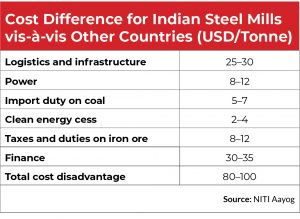 Lenient Rules of Origin: Rules of Origin (ROO) are a critical part of the FTAs for conferring the originating status of goods being exported, thereby qualifying for concessional duty under the FTA. Currently, the negotiated FTAs have lenient ROOs. For instance, the Indo-Japan /Korea FTAs have a Product Specific Rule (PSR). This PSR requires change in Customs Tariff Sub-Heading (CTSH) at 6-digit level without any value-addition requirements under the general ROOs. Whereas the Indo-Asean FTA requires value-addition of 35% along with change in CTSH at a cumulative level across all Asean countries irrespective of minimum value-addition in the country of export. The presence of lenient ROOs has been leveraged by non-FTA countries to channelise their exports via these FTA countries by capitalising the concessional tariffs without adequate value addition.
To check these violations of ROOs and to bring in the requirement for rigorous checks on imports, the Government of India notified the Customs Administration of Rules of Origin under Trade Agreements Rules. (CAROTAR), 2020 which came into effect on September 21, 2020. 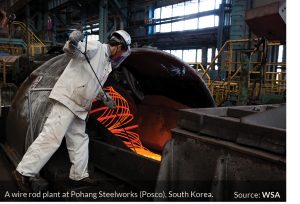 Apparently, these rules are seen as a motivator for the domestic industry, including steel, as it aims to cut down on frivolous imports at a preferential rate. However, it will be too soon to comment on the efficiency of the said rules in achieving their desired objectives, as it will significantly depend upon the implementation and monitoring of these rules by the government agencies.

It is also argued, that to protect the domestic industry, India can also re-negotiate for the inclusion of the auto-trigger safeguard mechanism to check drastic import surges with its FTA partners. This auto-trigger safeguard mechanism was also proposed by India in RCEP negotiations. According to this mechanism, in case there is a flood of imports, (From the FTA partners) after reaching a certain threshold, the auto-trigger of safeguard duties on the import of concerned product will be initiated. These thresholds can be mutually decided by the two parties in the process of re-negotiation. For instance, South Korea, in some of its FTAs, has included sector-specific safeguard mechanisms to protect its agriculture sector. This mechanism provides the Korean government the authority (and not to the other FTA partner) the possibility of imposing the safeguard measure[1] when the aggregate volume of imports of certain identified agricultural products exceeds a trigger quantity set out in the agreement.

Another example of inclusion of the trigger safeguard mechanism is of the Free Trade Agreement between the Eurasian Economic Union and the socialist republic of Vietnam3.

Further, the existing FTAs provide for a cap on safeguard duty to lower the applied MFN tariff applicable at the time of signing the FTA or the prevailing applied tariff.  This cap should be modified to minimum at prevailing MFN tariffs. In addition to the above issues, the exports of seconds and defective steel from the FTA partners qualify for the same level of concessional tariffs.

It can be said that the preferential trade agreements with Japan, Korea and Asean have been one-sided from the date of inception. In a post-Covid scenario, the situation has further aggravated, which has adversely impacted millions of jobs on the back of an unprecedented economic meltdown.

Given the current situation, the government can suspend or renegotiate these agreements. In case of renegotiation, the government should focus on introduction of the Border Adjustment Tax (to neutralise non-creditable duties/taxes on manufacture of domestic steel vis-à-vis imports), quantitative restrictions (QR), as done by the European Union, and auto-trigger mechanisms to safeguard the domestic industry till the situation gets normalised with the recovery in economic growth up to a certain level.

To terminate the trade agreement, the government can use the provision of an exit clause. An exit clause allows a disappointed party to the agreement to terminate the trade policy obligations. If India chooses to exit the FTAs/RTAs, it can be done by following the procedure provided in the respective exit clause of the FTAs/RTAs. In case an agreement doesn’t have the exit clause, the agreement can be terminated by utilising the customary international laws4.
Another way in which the Indian government can suspend the agreement through the FTA route is by exercising its powers under Article 11 of India-Japan CEPA, Article 2.9 of the India-Korea CEPA and Article 12 and 13 of the India-Asean CECA by invoking general and security exceptions available under WTO’s GATT framework.

2See WORKING PAPER No. 54, Republic of Korea and its Growing FTA Network A study of provisions in Korea’s FTAs on access for merchandise goods into its market by V. S. Seshadri

4Customary international laws are those international obligations arising from established international practices, as opposed to obligations arising from formal written conventions and treaties. One such example is the provision of exit clause under Vienna Convention on the Law of Treaties [“VCLT”] i.e., termination with mutual consent, Unilateral Termination and modification. Article 54(b) with Article 56 of the VCLT shows that trade treaties are temporary in nature and can be terminated unilaterally. But instead of absolute termination, Article 59 of the VCLT allows the parties to terminate an older treaty by modifying and adopting a new treaty.

The author is Senior Executive, Trade & Regulations, at the Indian Steel Association (ISA).

Please note that any information offered in this article is expressly the opinion of the author of this article and does not (necessarily) reflect the views of Steel360 magazine. No part of this publication may be copied, reproduced or stored in a retrieval system or transmitted in any form or by any means, mechanical, electronic, photocopying, or otherwise without the prior written permission of the author and publisher.