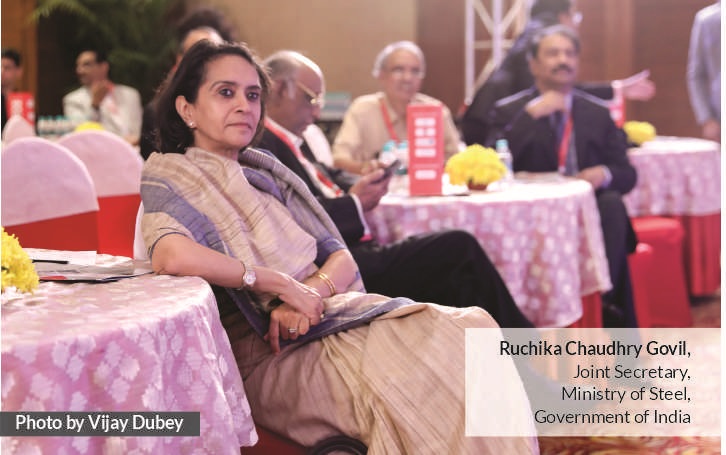 Steel360 caught up with Ruchika Chaudhry Govil, Joint Secretary, Ministry of Steel, Government of India, in Delhi. In a free-wheeling interview she dwelt on several key issues plaguing the industry. Where the high-profile Odisha iron ore auctions were concerned, she said, one can only second-guess how the merchant miners and steel prices will behave in the days to come, but there will be no disruption in iron ore supplies. On scrap, she revealed that India’s annual scrap generation is pegged at 25 MnT but officially no data is being collected in an organised manner. She wondered aloud on the definition of the “strange creature” that the secondary sector is. And, importantly, she confided that nowhere in the world can huge steel-making capacity be sustained solely through the electric route. Reason? There is just not enough scrap to sustain that kind of an economy of scale. For the full interview, read on:

Q. How will the post-2020 Mineral Auctions process play out? Who will eventually benefit? Is there the possibility of cartelisation with the big players paying astronomical premiums to grab some of the mines?

A. First of all, the auctions process has nothing to do with either the Central government or the Ministry of Steel for that matter. It is entirely a state subject. The state governments are responsible for the entire exercise and we in the ministry are merely onlookers.

One thing is clear: many captive players are grabbing the mines that were hitherto with the merchant miners. Now, we can only second-guess as to how the merchant miners will behave in the days to come. How will all this affect prices is again something we are currently not quite sure about.

But there will be no disruption in iron ore supplies. I personally look after the OMDC mines on behalf of the ministry. As far as these mines are concerned, it is the state government that decides what to do with them. As per the new notification, new lease holders will be able to carry out production with the old ECs/FCs for a period of two years.

Q. What is your take on the government’s new steel scrap policy? Will it turn out to be a game-changer?

A. The policy is definitely in the right direction and the government has proposed setting up scrap dismantling centres in different parts of the country but they are all starved of scrap.

Officially, India’s annual scrap generation is pegged at 25 million tonnes (MnT) but it is very difficult to be sure about this figure because officially no data is being collected in an organised manner. The country needs 32 MnT of ferrous scrap every year and we import about 7 MnT. We believe that if there are organised scrapping centres and the material has intrinsic value, it would get captured better. There is automobile scrap, construction scrap, mill scrap and so on and, therefore, if we aggregate all kinds of scrap, the spatial spread gets a little diffused. 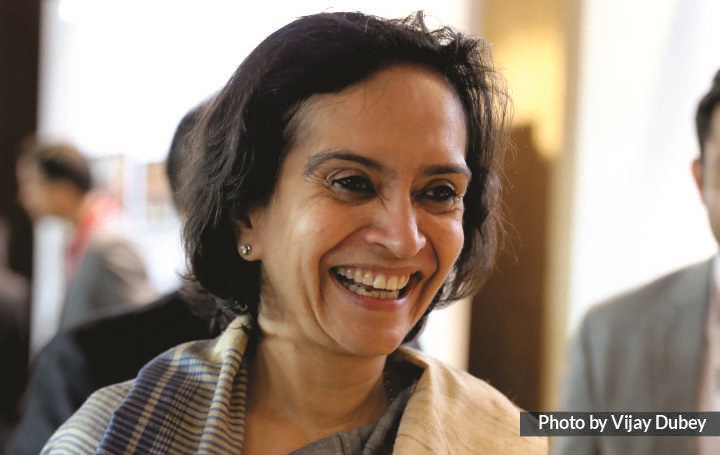 Q. Going forward, do you foresee any hiccup in the way of the implementation of the government’s scrap policy?

A. The notification for the new policy came out on November 7, 2019. So the policy was proposed at that time. The Ministry of Steel just acts as a facilitator. We talk to the Ministry of Mines, the Ministry of Environment & Forests (MoEF) and respective state governments. Our objective in proposing the vehicle scrapping policy was to ensure that India becomes self-reliant as far as scrap generation is concerned.

Q. The government had proposed a set of policies to boost the secondary steel sector. What’s the update on that?

A. The secondary sector is a strange creature. First, there is a definitional problem as regards what the secondary sector really is. Those producing less than 1 MnT per annum? Those who run mini-BF mills? Those who manufacture only through the EAF/IF route? So the rollers, processors, the sponge iron players, pellet makers, mini-BF and EAF mills all call themselves the secondary sector. And there are intrinsic conflicts as to what they want from each other! So when we talk about the secondary sector we do it from a very broad perspective. Raw materials security, availability and cost of power and logistics as well as availability of credit are the major issues confronting the sector.

Q. Will steel consumption and demand pick up in the days to come? How will prices behave?

A. It all depends on the economy. If the economy picks up, steel demand will automatically pick up. The government has announced a slew of infrastructure projects that will expectedly boost steel demand…

Q. What is your take on the 300 MnT per annum steel-making capacity by 2030? Are we on track towards achieving that goal? Also, most of the capacity expansion projects are brownfield ones…

A. If there is so much scope for brownfield expansion why would investors want to start greenfield ones from scratch? If I have to buy a new plant, say, I would prefer buying a bust company as there are so many non-performing assets for the taking. Even today the banking sector is in stress. We know of South Korean companies that are interested in nothing less than 10 MnT per annum. So, it all depends on the company in question and its expansion plans.

Q. Is the country’s logistics networks the name of the game with a view to achieving the 300 MnT goal?

A. It is of paramount importance. For every unit of finished product, producers today have to transport four units. They have to transport both the raw materials and the finished product. The few PSUs that I look after are always constrained by logistical issues such as the timely arrival of iron ore and coking coal. They are starved of logistics support. The Ministry of Steel can only facilitate the development of inland waterways, roadways, railways and projects like Sagarmala…

Q. But Sagarmala is a project with a high gestation period…

A. See, coastal steel plants like JSW Dolvi and RINL can kick-start new projects under Sagarmala. Also, it is necessary to set up dedicated freight corridors, for example from Odisha to Andhra Pradesh. But all these projects take time.

Q. What is the government’s roadmap for boosting rural steel demand?

A. We have been perpetually talking about Awas Yojna and all that and in 2017-18 a lot of demand was actually generated through the scheme. But bulk demand for steel always comes from new big infrastructure projects. The government has earmarked INR 100 lakh crore of investments in infrastructure development which will have to be bifurcated into different projects to be executed over a period of time. Every economy has an absorbing capacity. Nobody would want to place big-ticket infrastructure orders without a stable back-up from the cement and steel industries. The objective is to kick-start the economy where businesses would read all the signals correctly, gauge emerging demand and channelise resources in a cost-efficient manner.

Q. So, when can we expect to see an upturn in the Indian steel industry?

A. Well, now’s the time. We were expecting an upturn from the fourth quarter of last fiscal itself. The coronavirus scare simply came out of the blue and everybody is nervous about it.

Q. Previously all government tenders for bulk purchases maintained that only integrated players such as Tata Steel, JSW, SAIL could participate in supplying the required material. The ministry changed that clause to include secondary players too. But participation from the secondary sector is still zero. Why is this so? Because of quality issues?

A. No, many secondary players conform to BIS norms and quality is not the issue here. The prevailing mindset is that steel made from scrap in the EAF route is qualitatively inferior to steel made in BF. Kachra se kachra banega is the ruling mindset. In contrast, iron ore and coal, being products of Mother Earth, help in producing superior grade steel. Many people think along this line… 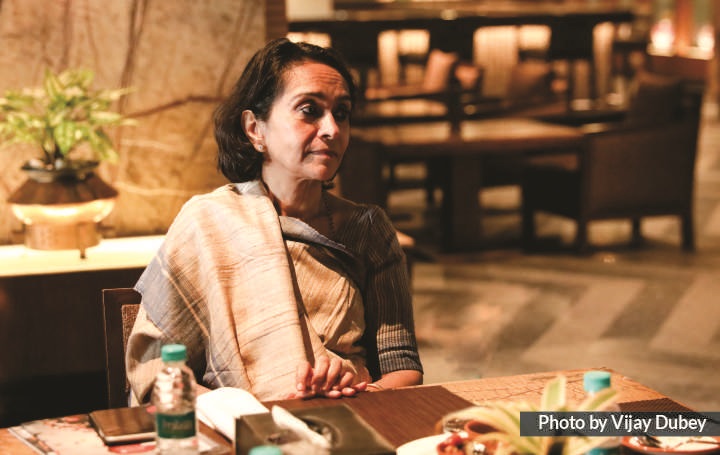 Q. But many experts are of the view that the BF route should eventually be phased out because of environmental concerns…

A. That is well nigh impossible. It is not going to happen anytime soon. This is because of the simple reason that nowhere in the world can such huge capacity be sustained solely through electric steel-making. And, the reason is that there is not enough scrap to sustain that kind of an economy of scale.

So the question of phasing out of the BF route is impracticable as of now. For instance, in order to produce 300 MnT of steel India would need about 400 MnT of scrap. Where would that come from? I have seen so-called experts going hammer and tongs against sintering in favour of boosting the use of pellets. But, even in modern BFs, about 25% of the feed is pellets. Where would the rest come from?

People are saying that China and the US are now shifting to scrap. But that is not strictly true. In Europe, it is true that scrap is predominant. But look at the individual country-wise capacities there – 3 MnT, 7 MnT, maximum 10 MnT? Not more than 100 MnT like in India.