Global steel prices touched record highs in recent months as economies started to recover from the pandemic, supported by demand outstripping supply as steelmakers worked hard to restore production. But, in India, Europe and the US prices have paused, indicating the post-Covid rally may have run out of steam. It prompts the question: Is there a natural inflection point after months of steel price increases or are markets simply taking a breather before heading up again?
The answer is probably both. Prices are being rolled over rather than increasing as buyers are reluctant to buy when they have no idea when the steel will arrive, and what the market will be like when it does. But as the pricing power remains with the steel mills, and downstream customers need to secure material somehow, higher prices are likely to continue over the near term.
In India, seven months of continual HRC price increases finally took their toll, with end-users complaining that prices had reached unsustainable levels. According to S&P Global Platts, Indian HRC in Mumbai was INR 53,500/MT (USD739.65/MT) at the end of February, having risen around 65% since late May.

China was the first country to experience this catching of the breath, but has well and truly got its second wind. It was the first country to go into lockdown last year and the first to emerge after a relatively short period. The country’s steel market hardly missed a beat, posting record crude steel production and strong prices and margins over 2020. Just before the Lunar New Year holidays in 2021, steel prices deteriorated and profit margins for flat steel products (the type used in manufacturing) went into negative territory for the first time in a year. Steel rebar product margins were weak because cold winter weather meant building site work largely stopped. Further, many migrant workers took the opportunity to return to their hometowns earlier than usual.
Market participants wondered if the weaker steel prices were due to the usual pre-holiday slowdown or whether the steel market had witnessed a correction after many months of rising prices.
In fact, domestic prices of Chinese hot-rolled coils have risen by around 10% since the market came back from the holidays, and steel mill sentiment is buoyant. Traders and end-users are more circumspect, however, arguing that downstream demand is still in recovery mode.
China’s manufacturing activity performance, as measured by the National Bureau of Statistics, fell to its slowest pace in nine months in February, but that is normal in a month dominated by the New Year holidays. However, this followed weak months in December and January, indicating that manufacturing demand had come off the boil somewhat. In China as in other countries, including India, manufacturing has been a strong performer in recent months due to pent-up demand during lockdowns. Auto production and sales have recovered but may face pressure in some countries due to the global shortage of semiconductor chips. This may dent slightly India’s manufacturing performance, which hit a nine-year high in February.

In the United States, steel coil prices have reached record highs as end-users scramble to secure material. The severe winter weather in the south of the country caused some mills to close down, tightening up supply even further. Prices have paused in the US but are expected to continue climbing over the next three months. When availability of spot material has almost totally dried up and steel mills are in control, prices can only head in one direction. 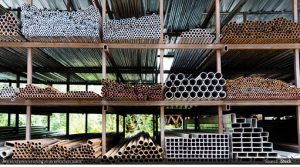 The other factor that is supporting high steel prices is the rising cost of raw materials, such as iron ore and metallurgical coal. Iron ore prices have been extremely strong, averaging around USD 167/MT delivered to China over January-February, according to the Platts benchmark for 62% Fe fines.
Countries such as Japan and India have been lifting steel production and India has more new capacity planned for this year. As both countries are big importers of metallurgical coal, this will keep imported prices at a reasonable level despite a lack of Australian coal exports to China.

Paul Bartholomew heads up S&P Global Platts’ Metals Analytics division in APAC. He has been covering the global steel industry for 13 years, including two years in Shanghai as China Editor for UK-based Steel Business Briefing.

Disclaimer:  Please note that any information offered in this article is expressly the opinion of the author of this article and does not (necessarily) reflect the views of Steel360 magazine. No part of this publication may be copied, reproduced or stored in a retrieval system or transmitted in any form or by any means, mechanical, electronic, photocopying, or otherwise without the prior written permission of the author and publisher.