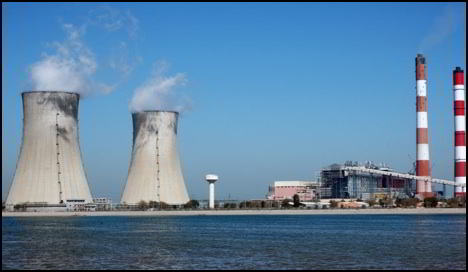 The plenty that causes the agony

Angul produces around 40 thousand MW of power from generators driven by steam turbines, all sighing out their steam through tall chimneys, their work done – sort of a 6,000 km² sauna !

The power plants were drawn into Angul by the abundance of coal. At present there are 7 opencast and 3 underground coal mines in operation in the neighbourhood. But the future of the power plants is rather bleak – both near term and the distant. Some of the older ones could face closure in the next five to ten years. For a rather “silly” reason. They know not where to dump the fly ash.

The NALCO plant for instance has an ash pond that is bigger in area than the areas of the power plant and the smelter plant taken together; but it is almost full. But a distant problem hangs on the horizon of thermal power plants in India – the country’s coal reserves are not going to last for long. Do not be distracted with all that noise about the coal-block allocation – those may be shrieks of dogs fighting for the last fragments of meat on the bone.

As I stood dusting off the soot on my white Adidas on the road to Thalcher, I wondered what would happen to Angul when the mega furnaces fall cold. What would happen to Odisha when all those overhead transmission lines become “powerless”. Perhaps nothing; power that never existed shall not be missed. But what about the countryside lost forever chasing the dream of power ? What about the dignity of a people gone to the dogs ? Unfortunately there is no Ctrl Z button in real life.