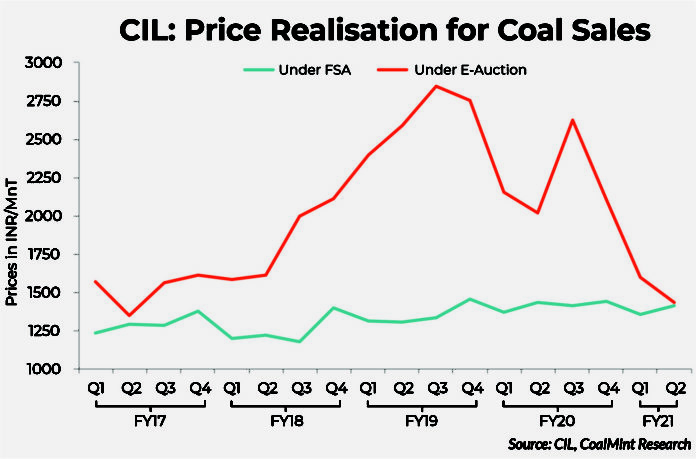 The Indian coal industry underwent a rather distressing year, jolted by the nation-wide lockdown imposed in the third week of March to curb the spread of Covid-19.

Under such unforeseen circumstances, Coal India Ltd (CIL) missed its production target for financial year 2019-20 (FY20). However, despite posting a steep recovery of late, the miner could not prevent its output level falling year-on-year (y-o-y), which dropped 0.8% to 602.11 million tonnes (MnT) in FY20 compared to 606.89 MnT in FY19.

The power sector, which is the largest coal consumer in the country, was majorly impacted by the sluggish industrial activities that resulted from the economic slowdown.

Towards the beginning of this year, power generation had shown sign of recovery during January-February, 2020 on account of early arrival of summer, after witnessing a continuous decline y-o-y for the past four months. However, any sign of further correction was constrained by the nation-wide lockdown imposed towards the end of March 2020.

Although, the government has permitted power utilities to continue uninterrupted operations during the lock-down period to ensure proper power supply, demand was further reduced by lack of activity across industrial hubs.

In order to relieve customers from financial hardships, CIL had introduced a series of measures to ensure that they continued to lift coal in the difficult period.

Removal of the upper cap on coal prices, which means that the reserve price in auctions for both the power and non-power sectors was kept the same as the notified price in various auctions for the first half of FY21, was an important decision taken in this regard.

However, despite the relaxation, tepid response was seen in these auctions wherein price realisation for coal sales dropped nearly 26% y-o-y to INR 1,598.14/tonne during the first quarter of FY21 (April-June) against INR 2,155.26/tonne in the same period of FY20.

Coal allocation via the fuel supply agreements (FSAs) route has been a cheaper mode of supply comparable to the auctions, but due to the prevailing discount, the gap in terms of price realisation for these two routes reduced to its lowest level since Q2FY17, assessed at INR 25/tonne in the second quarter.

With a gradual uptick in demand, CIL has restored the upper cap on auctions from October this calendar, whilst from November onwards it has agreed upon the earlier practice of vesting the power in individual subsidiaries to keep the reserve price as per market conditions.

As a consequence of healthy coal stock available at the power plants, CIL’s despatches to the power sector was down 7% y-o-y to 236.97 MnT during the first seven months of FY21 (April-October) compared to 253.76 MnT in the year-ago period.

In turn, emphasis was given to the non-power sector as their coal supplies were increased 10% y-o-y to 68.7 MnT in the seven-month period compared to 62.58 MnT in the year-ago period.

Towards the end of the year, the Indian government successfully carried out the first commercial coal mining auctions wherein bulk of 19 coal blocks was sold. The privatisation of the coal sector is not only expected to improve domestic coal availability and reduce costlier imports but also provide a stiff challenge to CIL.

Nonetheless, at this moment of time, it is safe to say that the demand slump faced in the country is a far greater concern than commercial mining for CIL.

Prices for non-coking coal, used to generate electricity in power stations, held up during the early part of the pandemic crisis before tumbling in April.

However, the coronavirus lockdowns in majority of the countries resulted in demand falling to its lowest this year since the Second World War – after factories’ power demand had gone down.

In the past three-and-a-half decades, only two other years have seen a decline in coal power output: a fall of 148 TWh in 2009 in the wake of the global financial crisis; and a 217-TWh cut in 2015, following a slowdown in China, market reports suggest.

However, in 2019, coal-fired generation globally fell by 3% y-o-y due to increased electricity generation from renewables, nuclear resources, and gas, along with slowing or negative power demand growth, impacting thermal coal prices also.

However, last year’s fall in thermal coal prices was not as significant compared to what happened in the past few months.

Indonesia: Indonesia is the world’s largest thermal coal exporter, with exports of 456.4 million tonnes (MnT) last year. It planned to ship 435 MnT this year. But its exports hit a three-year low of 28.5 MnT in September 2020 because of Covid-19 disruptions and reduced demand. During January-September, 2020, it exported a total of 311.3 MnT as per customs data. Higher quota restrictions by key importer, China, also acted as a deterrent to Indonesian thermal coal exports.

The lacklustre demand made prices of Indonesian GAR 4,200 kcal/kg coal, which accounts for the bulk of Indonesia’s exports, stand at USD 28.9/tonne (MT), fob on November 13. This is marginally above an all-time low of USD 22.40/MT reached in mid-September but well below a 2020 high of USD 36.5/MT in February.

New investments in the Indonesian mining industry have been lower and totalled under USD 2.2 billion this year till date, amounting to around 38% of an initial 2020 target of around USD 7.75 billion. This is the first time that investments in the sector have failed to reach government-set targets since 2018, the country’s energy ministry (ESDM) has said.

The environment ministry previously set a coal output target of 609 MnT for 2021, a 10% increase from its expected production this year. However, the Indonesian coal mining association has raised doubts about whether this is achievable given the current economic situation and weak demand outlook. 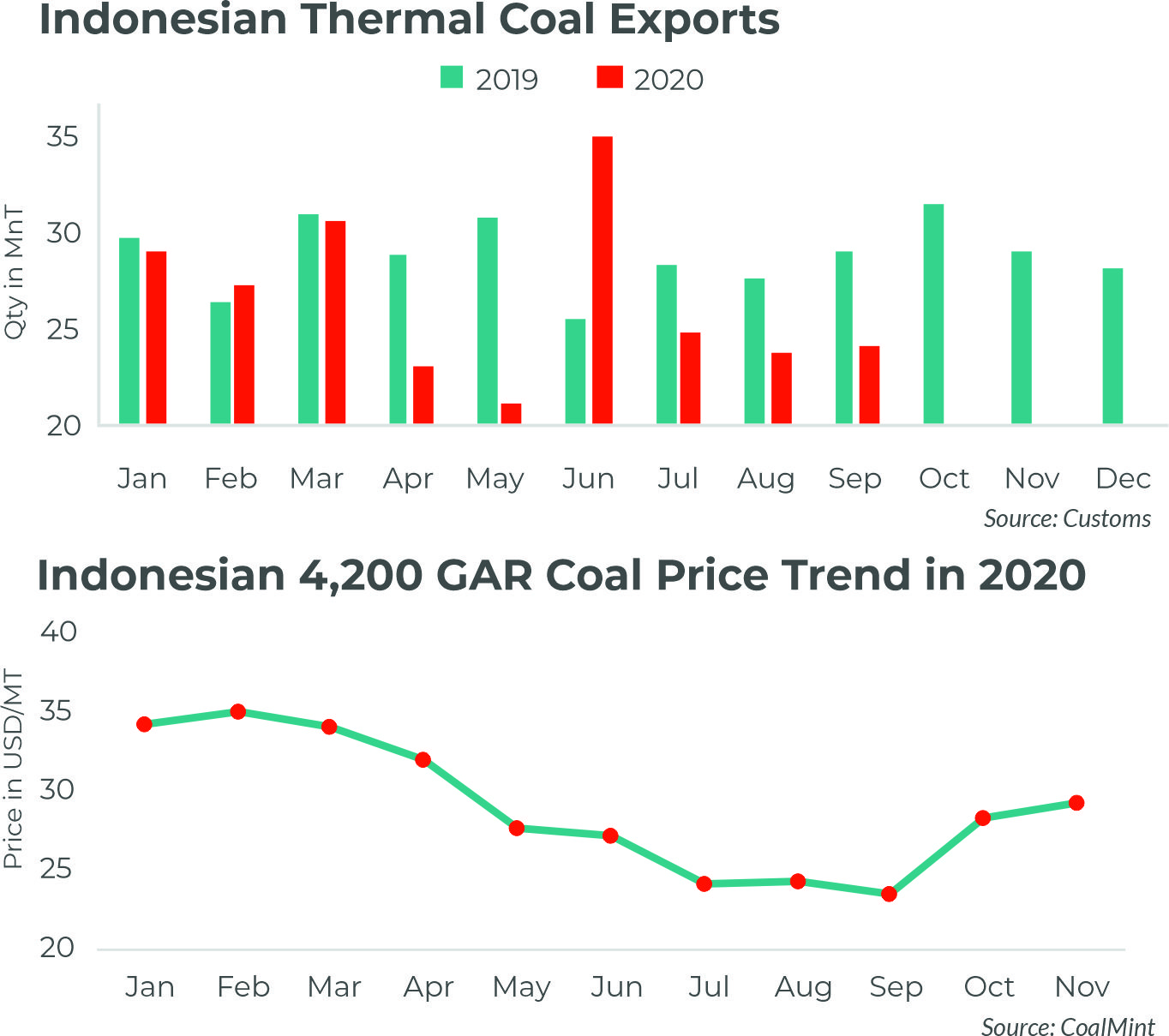 South Africa: The South African thermal coal market is one of the most badly hit. Due to the phased lockdown (since late March) in India, which is its key importer, the South African coal index (API4) touched new lows at USD 49/MT in May, 2020, which was as high as USD 85/MT during the start of the year.

In fact, the Indian government targeted a replacement of 100 MnT of thermal coal with domestic coal this year which further impacted the imported South African coal demand in India. During January-September, 2020, South Africa exported about 55 MnT of thermal coal, down by 4% y-o-y whereas exports to India fell by 11% y-o-y during the same period.

On the supply side, South Africa also faced extended lockdowns starting March, resulting which many medium and small-sized coal mining companies faced bankruptcy whereas the major ones lowered their coal production target for 2020. Then again, state utility Eskom’s stations also faced closure during this period as a result of which the country faced quite a tricky time amid increased supplies and reduced demand.

South African coal prices started getting support starting November as the economies opened up and returned to normalcy. As miners cut their coal output, domestic demand for coal increased in South Africa from cement and power sectors.

As on November 16, the API index rebounded and stood at USD 67/MT. While price action is extremely lacklustre as compared to last year, the momentum will most likely peak in the next couple of weeks. This all but guarantees a lower high for this cycle, and most likely a depressed price environment going into 2021.

With price on the run now we expect to see further upside towards the end of the year, targeting around USD 70, possibly even USD 80. The December/January period is likely to be a perfect time for miners to lock into longer term fixed price offtakes, although we suspect the forward curve will be reflecting some backwardation at that point.

Australia  Like South Africa, 2020 was the worst year for the Australian thermal coal market. Apart from the sluggish global demand due to Covid-19, Australian coal prices suffered severe setback amid restrictions on coal imports from its key importer, China.

The heightened political tensions between Australia and China played havoc with the former’s coal prices. In case of its other traditional markets like South Korea and Japan, increased nuclear availability and cheaper gas prices and preference for renewables gave tough competition to Australian thermal coal, impacting its prices. 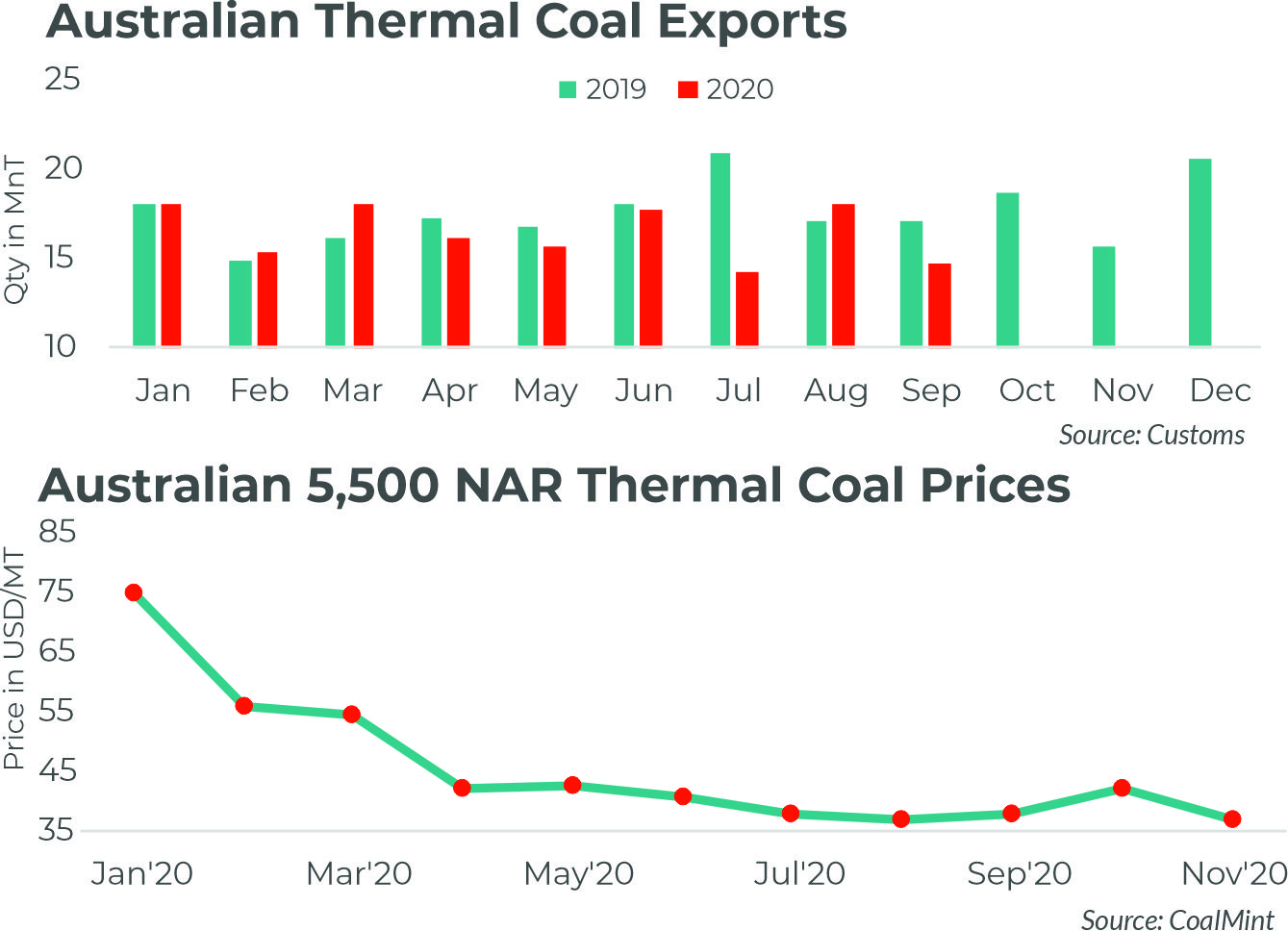 Australian thermal coal prices gained some support in September-end when mining giant Glencore announced production cuts for two-three weeks till mid-October. However, this increase was short-lived as prices fell in the second week of October, when China gave verbal notice to its utilities to stop Australian coal imports.

Since then, Australian thermal coal cargoes were sold at lowered rates in distress selling by both Australian sellers and Chinese buyers.

The popularly traded 5,500 kcal/kg NAR thermal coal prices touched a new low of USD36/tonne, fob Newcastle basis from the highs of USD 75/tonne during the start of 2020.

While the exporters there diversified their coal produce to countries like India, Pakistan and Vietnam, this move did not provide any significant support to the Australian non-coking coal prices. During January-September, 2020, the country exported about 274.4 MnT of thermal coal, down by 5% y-o-y basis.
Others

In case of other coal exporters like Colombia, US and Russia, the situation remained adverse as Covid-19 impacted demand and these countries also have to diversify their coal produce. While Colombian coal made its entry for the first time in India for three months during April-June, 2020, Russian coal focused on replacing Australian coal in China. High CV US thermal coal had good demand this year from Indian cement manufacturers.

The market situation improved starting November for all the three countries amid improved demand and production cut by major miners. Subsequently prices are also anticipated to improve next year i.e. in 2021.