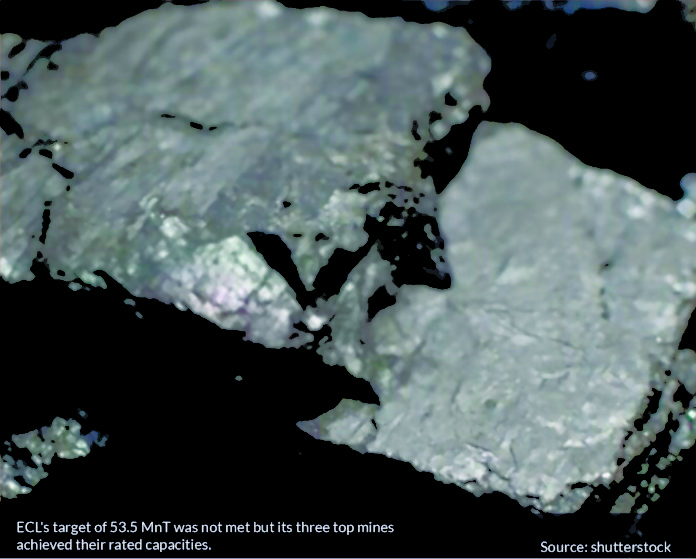 While financial year 2019-20 (FY20) has not been a great one for Coal India Ltd (CIL), it is noteworthy to highlight the performance of its subsidiary Eastern Coalfields Ltd (ECL), which had managed to attain the highest-ever annual coal production and overburden (OB) removal during this period despite adverse conditions.

Rewarded with superior grade coal reserves, the mining arm has been carrying out operations regardless of impeding factors such as environmental clearances (EC)/forest clearances (FC), land acquisition roadblocks etc, through the employment of modernisation techniques.

Recently, Steel360 had an opportunity to get up close and personal with B. Veera Reddy, who has been the Technical Director at ECL since January 2020, to discuss the company’s plans and the various challenges it faces as it commits to achieving new milestones, going forward.

Founded in 1975, ECL has coal mines located in two states – Jharkhand and West Bengal. At present, the company possesses a total of 80 mines, of which 50 are open cast projects and the remaining 30 are underground (UG) blocks.

In FY20, ECL had produced 50.41 million tonnes (MnT) of coal compared to the previous fiscal’s output of 50.2 MnT, thus emerging as the third CIL subsidiary to record a positive growth in annual production. Although, the target of 53.5 MnT was not met, its three top producing mines – Rajmahal, Sonpur Bazari and Jhanjra – had achieved their respective rated capacities.

Continuing with its positive form in the current fiscal, ECL has recorded coal production of 10.05 MnT in the first quarter (April-June, 2020) against the set target of 10.82 MnT, thus yielding a percentage achievement of 93%, a feat which is bettered only by Northern Coalfields Ltd, another CIL arm. NCL recorded production of 26.48 MnT in Q1 against the target of 27.49 MnT, thus recording a target achievement of 96%.

This year, the company has set a target of 55.02 MnT of coal production and has assured that the same would be achieved in the given time-frame.­ 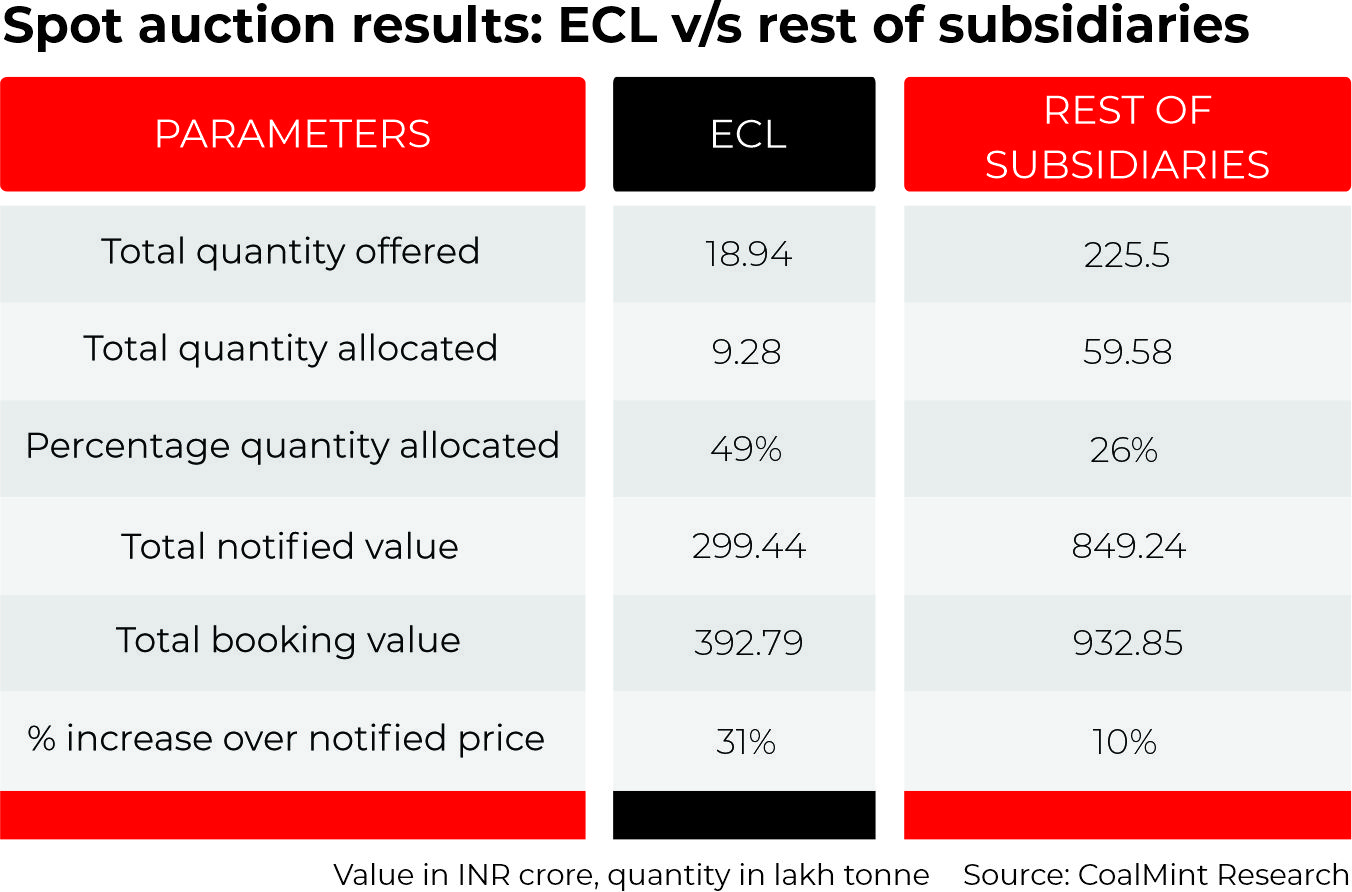 Although ECL’s coal production mainly comes from open cast projects, which contribute around 80% to the total output, the company also has expertise in underground coal mining.

Adopting state-of-the-art Longwall technology for extracting coal from its Jhanjra underground mine, the company had recorded production of 3.5 MnT in FY20, which was the highest-ever output recorded from an underground project in India.

Enlisting the various advantages of Longwall technology, Reddy said, it ensures maximum output, with minimum manpower and utmost safety without comprising on quality. Besides, it was stated that this technology can be adopted at any depth for carrying out mass production in an UG mine.

After witnessing the success at its Jhanjra mine, ECL has planned to introduce the Longwall technology at some of its other mines too. In addition, simultaneous implementation of continuous miners and other proprietary machines is also in the pipeline.

“At present, we have six continuous miners in operation, and already plans for six more are in the pipeline which would be operationalised by next year,” commented Reddy while stating the proposed investment in heavy machineries.
Despatch Constraints & Growth Opportunities

Dealing with difficult market conditions resulting from COVID-19, ECL has admitted that it is currently facing problems with despatches as the power houses were seen shying away from taking additional coal supplies due to lesser power demand and surplus coal stock availability.

In the first quarter of FY21, the miner has despatched 10.16 MnT coal, which is down by 21% year-on-year (y-o-y) from 12.88 MnT recorded in the corresponding period of the previous fiscal.

However, benefiting from the various reforms put in place to boost domestic coal usage, ECL has managed to add a few more customers in its kitty to facilitate higher supplies. The reforms include linkage rationalisation and import substitution to boost demand.

Power producers in the West Bengal region – such as DVC and WBPDCL – presented with an opportunity to rationalise coal linkages by taking supplies from nearby coal producing companies instead of from far-off mines, have opted to take coal from ECL to reduce transportation costs.

Consequently, ECL procured linkages worth 3-4 MnT from such customers, who were earlier taking coal from other subsidiaries.

Besides, it has also acquired 4.5 MnT of linkages for coastal power plants under the import-substitution drive. The company has also requested the non-power sectors which are importing coal, to take their superior grade coals for blending purposes and thus reduce their dependence on imported grades.

Nevertheless, the miner lamented that it had not succeeded in raising the despatch volumes of higher grade coals to power stations as they only prefer lower grades to keep the generation cost lower. Instead, the superior grades are majorly taken up by limestone, cement and sponge iron manufacturers.

In a period where coal auctions havereceived dull response due to lower demand, ECL outperformed the remaining CIL subsidiaries by fetching better sales figures in terms of percentage allocation and premiums received against the quantity being booked.

Especially in the spot auction conducted during the first quarter, the company had managed to sell 49% of the offered material, at a decent premium of 31% over the notified price.

Reviewing the various steps adopted in marketing the coal in auctions,. Reddy highlighted that availability of superior grades at ECL was the major reason behind the robust performance.

It is pertinent to note that ECL is blessed with coals having a wide range of GCV, from 6,700 kcal/kg to 3,401 kcal/kg (G3-G13) thereby making it accessible to a wide range of consumers.

Coal extraction is extensively carried out from three coalfields. The one from the Mugma area, in close proximity to Bharat Coking Coal Ltd (BCCL), has less moisture and high carbon and ash content. In the Rajmahal area, coal is of lower grade, while the Raniganj area is home to high grade coal consisting of 20% ash content, 30% volatile matter and moisture content up to 7-8%, which are desirable parameters in any grade of coal.

“Long flame, less ash and moisture content are the some of the requisite properties for any customer, which is why they prefer our coal,” said Reddy while informing on the variety of coals produced at ECL.

In addition, regular quality control measures taken up internally, and addressing customers’ complaints regarding grade-slippage were some of the important steps that helped ECL to garner healthy response in adverse market conditions.
Challenges & Initiatives

Despite boosting 50 billion tonnes (BnT) of coal reserves lying across Jharkhand and West Bengal, of which 15 BnT is extractable, ECL is facing hurdles in mining that pertain to land acquisition as the major coal-bearing area of Raniganj is densely populated and difficult to evacuate.

Besides, some of the underground mines which have been operating for quite some time are economically unviable and are expected to be shut-down in a phased manner.

Nonetheless, the company is determined to overcome the challenge in order to run the mines and achieve the target.

Talking about future production plans, Reddy said the company would raise its annual production to 85 MnT from the current levels of 50 MnT, in order to achieve CIL’s aspirational target of 1 BnT by FY24.

Seizing on clean technologies promoted by the government, the company has identified 57 sq km of coal-bearing area for coal bed methane (CBM) extraction, where preliminary works, including feasibility and project reports, have been done. The project is expected to be operationalised by 2024-25.

ECL has been given a capex of INR 1,500 crore for FY21, of which the highest sum of INR 157 crore would be levied on purchase of heavy machineries, it is learnt.