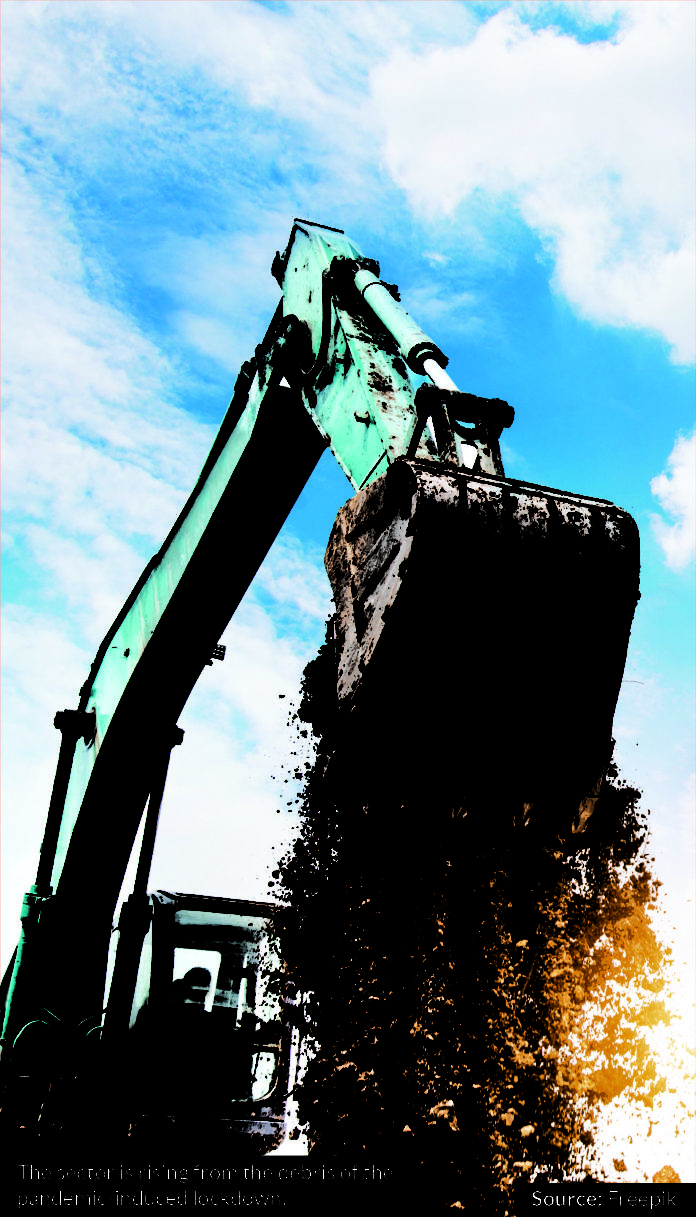 India’s construction sector is an important growth indicator as it generates investment opportunities across various related industries. The overall size of the construction industry of India is at around INR 10.5 lakh crore and it contributes around 8% of the overall gross value addition for the country. Construction is also one of the largest steel using sectors in India and second-largest employment generator. But, the sector suffered amid the unprecedented Covid-19 crisis and multiple nationwide lockdowns in 2020.

In the year 2021, it is aiming to bounce back to pre-Covid levels. 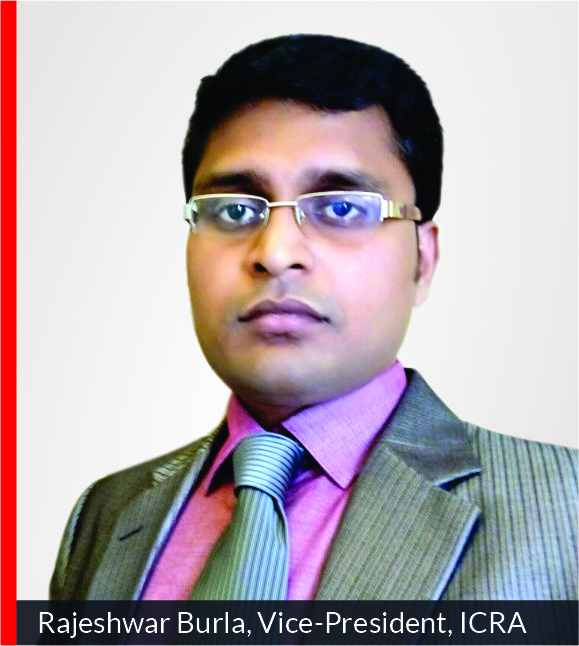 As per analysts, currently, the overall activity and project sites for the construction contractors have significantly improved in the last two-to-four-months and in terms of productivity, many of the contractors are operating at 85-90%.

In terms of labour shortage (caused due to reverse labour migration), most of the issues are resolved except in a few cases, analysts told Steel360.

However, productivity is slightly on the lower side, not because of labour availability issues, but because of social distancing norms that would have to be followed at sites. But it is improving.

“Given this backdrop, I think 2021 should be a normal year for the construction sector. There should not be any challenges in terms of the growth margins. Whatever the sector lost in 2020 due to Covid, I think, it should revert to that level without any challenge,” said Rajeshwar Burla, Vice-President, ICRA Ratings.

In FY21, in terms of operating income, the revenue decline could be seen in the range of 15%-25% for most of the contractors. This broad range is because some state government-related projects were impacted more severely when compared to projects funded by central government entities.

Who is Funding the Project?

Some states are facing financial issues, others, funding challenges, which are hampering the overall progress of various projects. Therefore, those contractors who are exposed to state-funded projects are relatively more impacted. In other words, projects funded by the state government are more impacted and revenues have declined by around 25%, whereas projects funded by the central government or those with funding lines available, have seen revenues down by around 15%.

In terms of margins, the effect could be in the range of 150 to 200 basis points reduction in the current financial year.

Burla explained that if one has to assess the construction sector in the current times, two points need to be noted: 1) who is funding the project? Is it a central government entity that has good funding back-up or a financial institution where they have already tied up the funds, so, there should not be any challenge in terms of release of funds. The other variant could be state-funded projects through budgetary allocations.

2) The second one is in terms of the location of the project. Remotely located projects are well inflated when compared to project sites that are present within the city limits, especially urban projects like Metro Rail or Smart City. Some of these cities are Covid hotspots, and starting work here is a challenge. 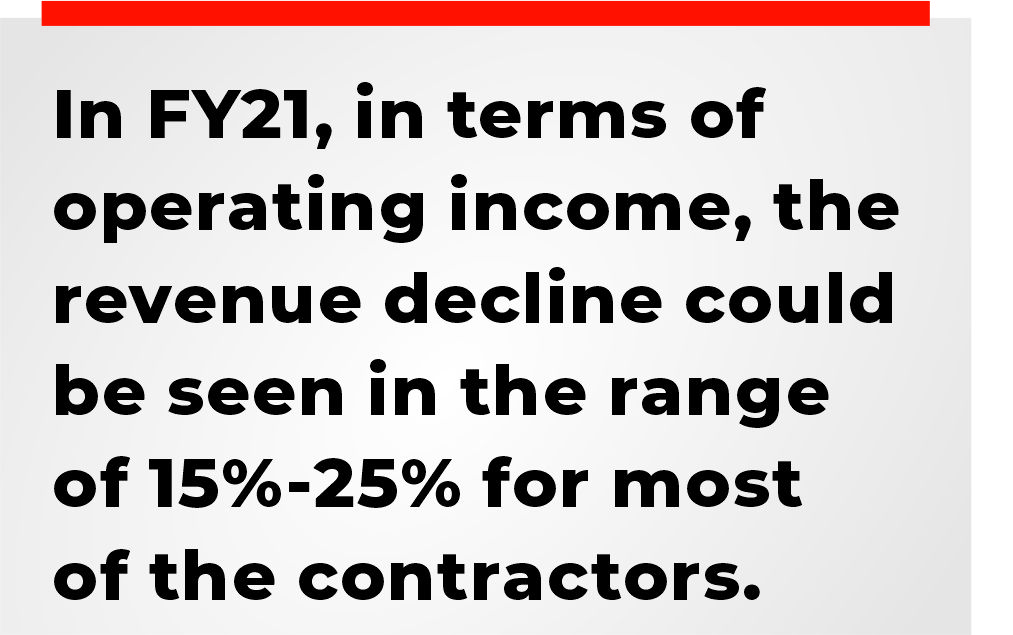 If the project is well funded, it should not have any impact in terms of release of funds, and contractors who are executing this project will not face any elongation in the working capital cycle in the current year, because of which the overall decline will remain more or less similar to that of last year or it could be slightly improved, as the central government has taken proactive measures to make sure that the funds are released in a timely manner.

However, there are constraints in the case of state-funded projects in terms of revenue received, with overall tax collections down. It varies from state to state, and it is to be noted that some states are badly impacted.

Some of the state government projects which have funds currently allocated will move fine, but those where a contractor is exposed to a relatively weaker state government, could see some elongation in the working capital cycles because fund release will take time. 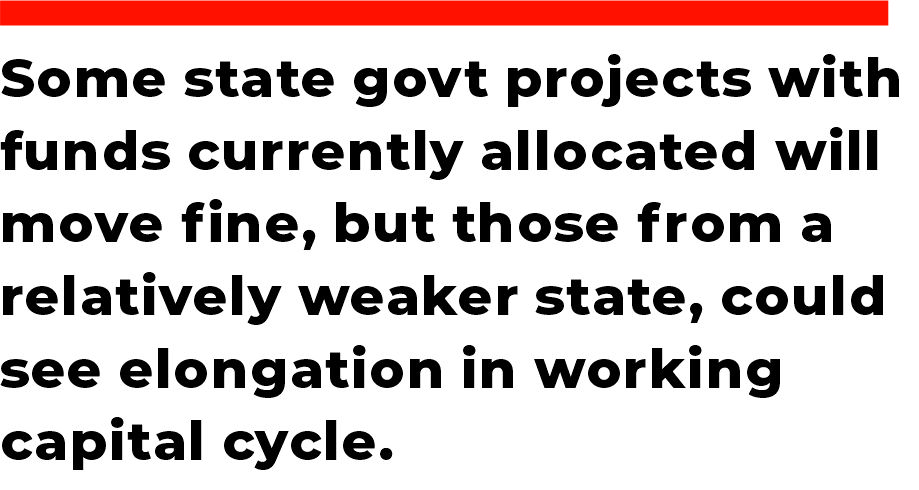 Challenges are obviously lower for contractors working in remote areas or dealing with authorities who are well funded by the central government or a financial institution. They may not see significant elongation in the working capital cycle and debt metrics coverage level will be relatively better.

Execution-wise, thus, the sector has almost reached the previous year’s figure despite the Covid impact in the first half of 2020. Compared to last year, there is a shortfall of 3%, but this gap will get bridged later as we will move along. November data is not available at present, but by the end of this financial year, it will easily be equal to or higher than last year’s execution.

Burla said, “The sector is not still reeling under pressure. Construction contractors to a largest extent have recovered, except that there are some funding challenges. But it is a function of liquidity. The better the realisation of bills, the healthier will be the cash flows for construction contractors.”

Central government measures like reducing performance bank guarantee requirements from the previous 5-10% to 3%, strict adherence to nil earnest money deposit (EMD) norms, are also helping contractors. At the time of bidding, no bid bond guarantee is required either.

In a major move in the Atmanirbhar Bharat package, the performance bank guarantee, instead of being kept almost till completion of the project, is to be released in proportion to the execution. This means, if 50% of the work is completed, INR 5 crore of a bank guarantee of say INR 10 crore can be released.

This will help the contractor in many ways. Incremental enhancements or requirements will go down, because the overall bank guarantee requirement itself is going down for the sector.

Secondly, and more importantly, for every bank guarantee that the contractor asks from the banks, it has to keep margin money with the bank that ranges from 10-20%. If the bank guarantee requirement is reduced, the fixed deposits he has to keep with the bank will also go down. That will be positive for the contractor because it will have that much more cash to deploy in the business rather than keeping it as a deposit.