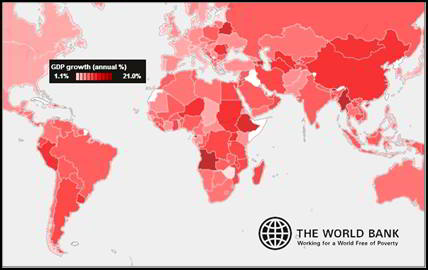 BRICS countries are once again in the limelight; it is indeed interesting to see how an innocent prophesy by Dominic Wilson and Roopa Purushothaman of Goldman Sachs in October 2003 has emerged to be the leading idea of the new decade.

Today BRICS countries account for 40% of the world population (they always had that distinction !) and 20% of the global GDP; but what is more important, they contribute 50% of the economic growth in the world. The financial crises in US and Europe have further enhanced the prominence of the BRICS countries.

But these countries have not been able to capture sufficient political clout on the global stage to match their economic prowess. That is what is making them roar. But is that roar likely to remain just that, or will it take them to the top of the table in world affairs, the position that Europe occupied till the WWII and then yielded it to US ? That is the question that stares everyone in the face, as they try to decipher the utterings at the 5th BRICS Summit at Durban.

Without going into the nitty gritty of what the BRICS countries see ahead of them, and whether all their plans could withstand the vagaries of time, let me share with you an improptu thought that crossed my mind as I looked at the map showing the growth rates of the global economies in vivid colours. The grouping looks a little out of sync with the reality as in 2012.