Engineering exporters’ continuous coaxing to the government to persuade domestic steel makers not to charge a premium for their raw material has finally paid off. Providing a huge relief to the engineering exporters, mostly belonging to the micro, small and medium enterprises (MSME) sector, domestic majors such as the Steel Authority of India (SAIL) and JSW Steel have agreed, following a stern directive from the commerce ministry, to charge these bulk consumers the same price for steel at which they export it to other countries. On the other hand, the government has set for the engineering exporters a stiff target of doubling exports in the next five years from the present USD 81 billion and further to USD 200 billion by 2030.
Engineering exporters have long been propagating that their share in the international market would fall drastically if the price of steel is not brought at par with the international rate. Costlier raw material is making exports uncompetitive. Steel makers, they had earlier said, were cashing in on the flurry of protectionist measures, initiated by the government to rein in imports, and enjoying in the domestic market a huge premium ranging between USD 150-200 per tonne and, thereby, cutting into the competitiveness of the highly employment-oriented user industries. Steel firms contest the claim, saying the premium could be at best 5%.

The new Commerce Minister, Piyush Goyal, did not miss the chance to kill two birds with one stone. One, the move will surely give a fillip to the engineering exports which would further swell India’s forex kitty and secondly, a steady and competitive

user- industry would provide the scope for generation of employment, the lack of which had become a huge political issue in the just- concluded Lok Sabha elections. The Steel Ministry, which has long given up the power to regulate prices of steel, was left with no choice but to endorse the proposal. 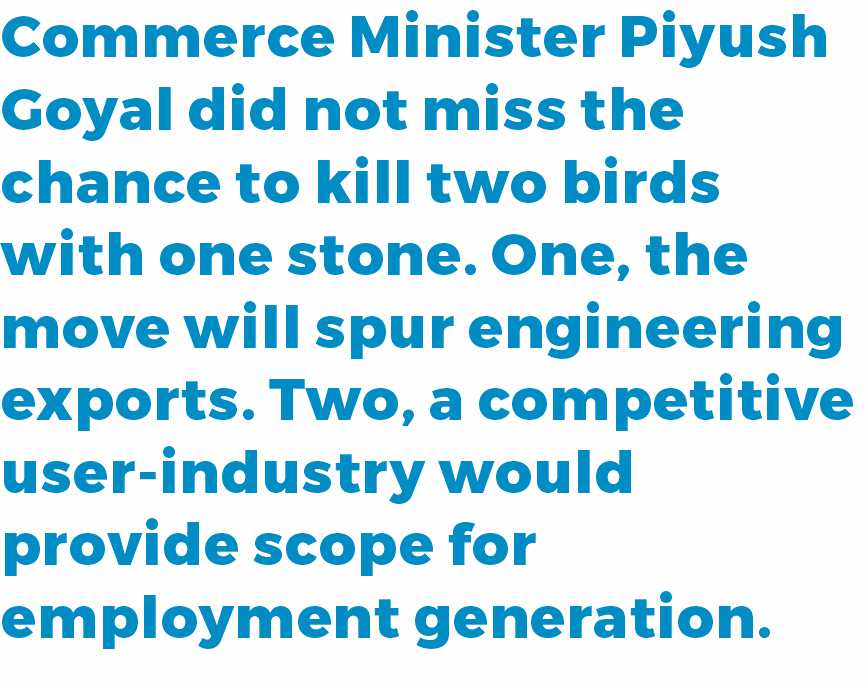 The decision will come into force following a notification by the Directorate General of Foreign Trade (DGFT). With this, cheaper steel will be made available, under an advance licence scheme, only to those bulk consumers who would export finished goods after value addition, and not sell these items in the domestic market. Engineering goods exports – which account for around a fourth of India’s merchandise exports – contracted by 7% year-on-year in April to USD 6.7 billion, compared to a 0.6% rise in the country’s overall goods exports. In financial year 2018-19 (FY19), engineering goods exports grew just 6.3%, against a 9% rise in the overall merchandise exports. Subdued exports resulted from higher domestic price realisation compared to the external prices for the steel makers.
“It’s a huge relief for the members of the EEPC. The government’s timely intervention will help us a lot,” said a leading exporter of engineering goods.
The commerce ministry’s move comes at a time when an escalating global trade war between the USA and China has reinforced fears of steel dumping by China and predatory imports from countries with excess production such as Japan and Korea, with which India has free trade agreements (FTAs) as well.
The steel makers’ fears are not unfounded either. After a gap of three years, India has again become a net importer of steel in FY19. The country, now the world’s second largest steel maker, imported 7.8 million tonnes of steel in 2018-19 against exports of 6.3 million tonnes.
The Indian steel sector started showing signs of improving from 2016-17 after two consecutive bad years of FY15 and FY16. Imports started zooming in while exports fell, prompting the government to initiate a flurry of tariff and non-tariff measures starting with the minimum import price (MIP) in February 2016. It came with a certain deadline or with a pre-demarcated scope or was even non-compatible with WTO provisions. Such safeguard measures have now been either withdrawn or become ineffective due to a spike in global steel prices. 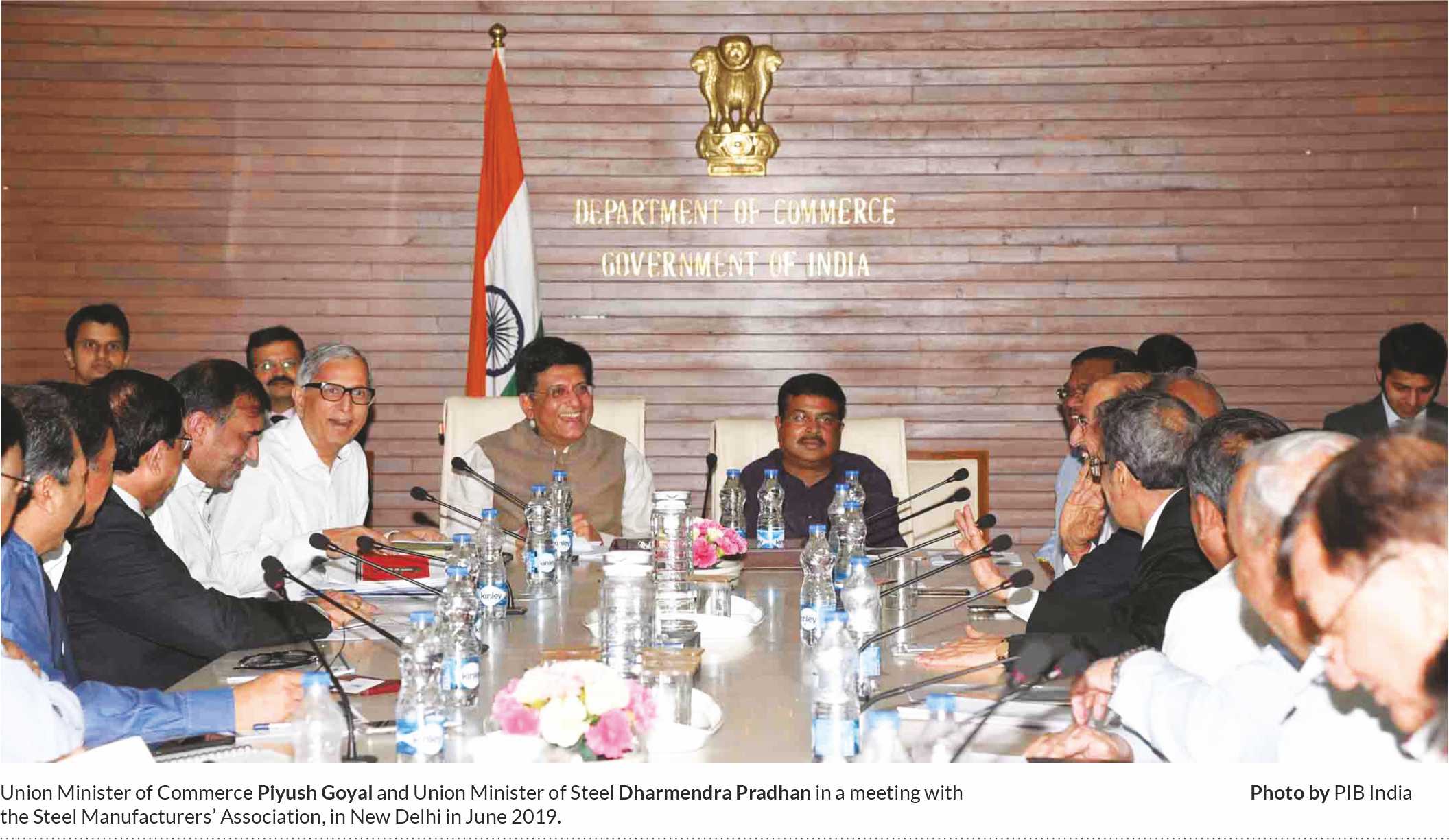 “The gross profit margin of top three Indian companies expanded by 5.6% y-o-y to 16.3% during FY17 when trade measures were undertaken by the government to protect the country from cheap steel imports. Similarly, these companies made profits at the earnings before interest and taxes (EBIT) and net level on a year-on-year (y-o-y) basis compared to losses posted during the corresponding period a year ago. During FY17, these companies made profits amounting to 9.6% of total income against losses made amounting to 2.9% of total income during FY16. On the profit-after-tax (PAT) margin front, these companies registered profits equivalent to 2.8% of total income during FY17 compared to losses reported equivalent to 5.7% of total income during the same period last year,” said rating agency CARE in a report published recently.
The steel industry has, for some time now, also been demanding that a 25% safeguard duty on ad valorem basis be imposed on six product categories, including semis, flats, longs, pipes and tubes, to curb imports. It also demanded that steel should be kept out of the purview of the FTA. They also argued that since the current anti-dumping duties are in the form of reference price, the industry urged for a revision in the reference price. The steel industry has also suggested that without the upward revision, the anti-dumping duty has become ineffective. Imports above the reference price attract no duty. During the anti-dumping investigation period between July 2015 and December 2015, the reference price was fixed taking into consideration the prevalent input costs. Since then, they said, prices of both key raw materials – iron ore and coking coal – have increased significantly resulting in a substantial increase in the international prices. The commerce ministry is said to have assured the industry that it will ‘look at the proposal’.
Whatever, given India’s low per capita consumption of steel, a growth in domestic consumption will augur well for the domestic steel industry. Engineering exports will also become far more competitive in the global arena making it easier for the industry to create an increasing number of jobs.