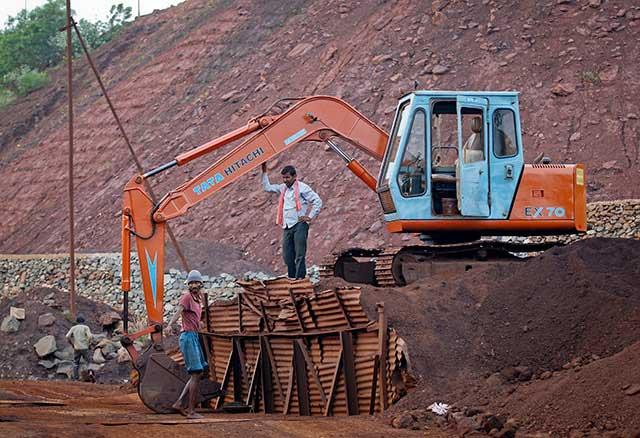 Indian manganese ore production fell on account of low off take and poor demand from manganese alloy manufacturers, who struggled with over-capacity and low margins.

With China’s slowdown, much of ore export was diverted towards India and offered at very attractive prices. This led to imports becoming cheaper amid ample supply of the material. Since import duty is very less on manganese ore compared to the taxes on domestic ore, imports became more lucrative.

Distribution of Manganese Ore in India

Manganese is an important mineral, which is used for making iron and steel and acts as the basic raw material for manufacturing alloys. According to Geological Survey of India, total manganese reserve in the country is estimated at 167 mnt. India has the second largest manganese ore reserves in the world after Zimbabwe. About one fifth of the world’s manganese ores are found in India and is the fifth largest producer of manganese ore after Brazil, Gabon, South Africa and Australia.

The manganese ore market witnessed interesting price action at the start of FY17. Prices rose briskly, in fact almost double since the end of FY16. The price rally was due to low inventory, tighter supply because to mine closures and pick-up in Chinese demand. State- owned manganese producer MOIL increased the price of all grades of ore for the April-June 2016 quarter up to 50%.

How will the Ore-Alloy Interplay Pan Out in FY17?

The fortune of manganese ore industry is linked with the fortune of the silico manganese industry in India. India has been the world’s largest exporter of silico managnese since 2008, beating Ukraine. However, manganese ore prices have started to retreat, in line with tumbling manganese alloys prices due to a lack of support from the steel sector. For example, silico manganese which was being traded at around INR 57,000 in the beginning of FY17 is now being offered at around INR 43,000/mt. Given the lack of appetite for the alloy, ore off take has also substantially reduced as the alloy producers are not looking to restock, either to replenish stocks to meet contract obligations with steel mills or to purchase ore in order to restart operations, given the more depressed sentiment. Moreover, bulk of the Indian ore is of low quality and alloy producers prefer importing higher grade manganese ore rather than buy lower grade ones from local producers. Hence, manganese ore production in India is expected to be low in the near- term at least.

Iran – The Next Big Export Market for Indian Ferro Alloys

SAIL, RINL and MOIL to get into a three way partnership