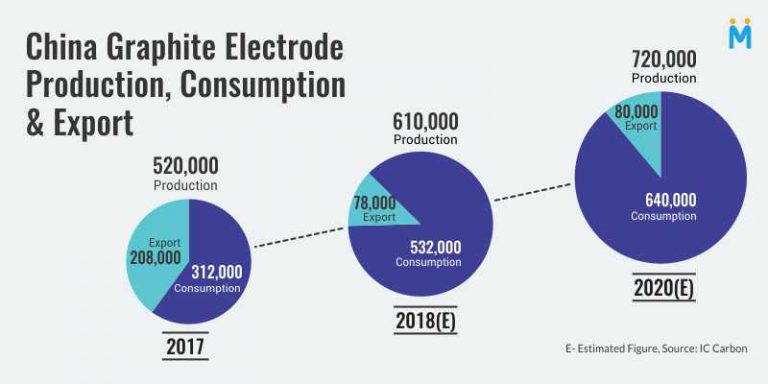 The sharp rise in Graphite Electrode prices was largely attributed to shutting down of Chinese Graphite Electode plants in 2017, resulting in a global shortage for the commodity. However, on the contrary official figures show exports of Graphite Electrodes from China in CY17 was 201,695 MT, which exceeded the exports in CY16 by around 58%.

With the myth being busted, the real supply squeeze of exports from China is likely to kickstart in 2018 and haunt the steelmakers around the world.

We forecast that Chinese Graphite Electrode consumption will rise rapidly on the growing importance of scrap in the country, and a push by the govt. to curb pollution has led to many companies to switch to EAF route of steel making.

About 56 new EAF furnaces are coming up in by the end of current year with an aggregate capacity of ~60-70 MT. Thus Chinese production through EAF route is expected to rise from 5.2% (CY 2016) to about ~13%.

Why will Chinese Graphite Electrode Exports Dry Up in 2018?

For Steel-making via the EAF route, there is no substitute for Graphite Electrodes. Global manufacturers who have high dependence on Electrode imports from China, need to prepare themselves for further supply tightness of Graphite Electrodes as China rapidly increases its EAF capacity and implements reforms aimed at culling polluting capacities.

Rising Generation of Scrap in China

Chinese Scrap Consumption to increase with closing down of sub-standard steel capacities after realizing the hazardous effects of CO2 emissions caused through the use of induction furnace, China is shifting towards the greater use or electric are furnace for steel production.

Official figures indicate that, China consumed around 90 million tonnes of steel scrap last year. According to industry estimates, this figure will rise to 150 million tonnes by 2020-as China pursues a 30% scrap ratio by 2025.