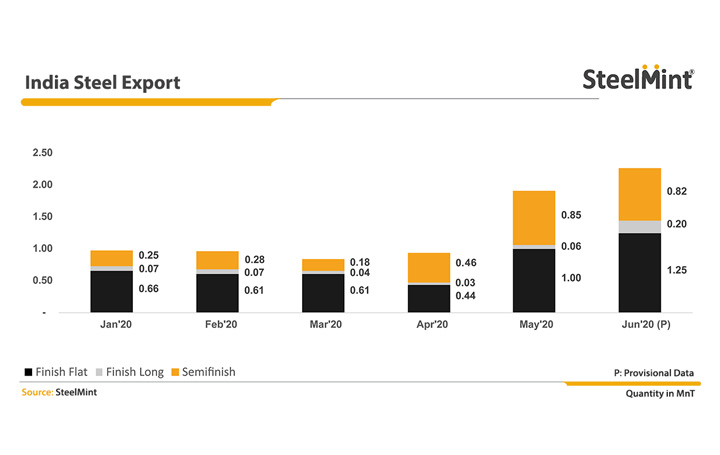 Mills have been gung-ho on overseas sales since the lockdown had begun in the third week of March and exports of finished flats, finished longs and semis had seen a sharp upswing from April till June. However, analysts SteelMint spoke to feel that the party for July till September can, if not exactly be rocking, enter a subdued phase. The main reason behind this could be the fact that domestic demand is trudging back. Usually, July-September is a period when mills get active on the exports front because the monsoon sets in and the domestic market becomes sluggish.

But, this year, analysts are not sure how the market will behave because buyers are returning after an almost three-month lockdown. One cannot predict with certainty but an inference can be made that the market for rebars and longs – items that are required in construction – is not exactly looking great as of now because the monsoon has set in. Therefore, exports in these items will continue. But, in flats, domestic demand is still good because the automotive sector is again trying to recover.

Therefore, export volumes will likely return to their usual levels. They may not be as high as what we saw in the last three months but could be 20%-25% of the total production level of mills.

As said a source, “Going into July, overseas sales could spring back to normal levels or stay a little higher but will not replicate the sharp spike seen in the first quarter. The usual levels of exports are 15-20% or a little more of the mills’ production in a business-as-usual scenario.”

HRCs, compared to other steel products, are relatively doing better in the domestic market. But, it all depends on how the end-customer prioritises his/her purchases in this and the next quarters. Many of us are forced to adjust ourselves into the new lifestyle where need-based buying is more important than luxury spends. Flat products primarily go into the automotive segment, which is still struggling to push sales. While the four-wheeler segment is still a laggard, two-wheelers have improved their performance. Consumer durables is another segment which primarily depends on flat products. Therefore, in the short run, it would be wise enough to say, while mills focus more on domestic sales – as the segments are opening up and buyers are coming up with requirements – the “usual” volumes for exports would still be maintained.

“April and May were the two months when the mills were struggling to survive. Domestic demand was nil due to the lockdown. No other market, other than China, was behaving normally at that juncture. Whether in South East Asia, Middle East or Europe, which are usually the prime destinations of steel from India, were in lockdown. The only option thus was China and to an extent Vietnam, Nepal and a few other countries,” observed a source.

In fact, all the mills were able to survive because of their exports to China, opined another source. If a mill has to supply the material in August, then it has to complete its entire booking quantum by the middle of July. In the case of big players, they may stretch their books till the end of the month.

Most of the mills were able to read the situation well. A leading integrated flat steel producer, for instance, had booked orders for hot rolled coils (HRCs) from April-end till mid-June and up to August-end. “It had anticipated that the lockdown would extend further and the labour issue would also persist for some time and nor was it expecting domestic demand to revive immediately. The mill has covered itself from June till August. So, it does not need to book additional quantities for exports now,” informed an industry insider. This particular mill usually exports not more than 16-17% of its production but in April almost 100% of it went into exports. In May, the figure reduced to 80% and in June, with the domestic market opening up, overseas sales amounted to 30-35%. As per the source, in July and August, exports would probably return to their normal levels to hover around 20% of the total output for this particular steel major.

Another leading integrated steel major in the private sector shipped almost 25% of its products to China in the last one month. In April and May, exports comprised 50-70% of its total sales. Post-mid-June, its production was impacted because of the pandemic. Therefore, it had some spillover from the previous month. “The quantity that was supposed to be exported out in June will get produced in July. As a result, this particular mill is likely to have a shortfall in June of 170,000-200,000 tonnes across all product categories. This steel producer has not booked any further orders in July. It is trying to ship out this month the spillover from June. It is ready to book for August but the quantities are not that great. The volumes, in fact, have come down to usual levels of 200,000-300,000, covering semis, longs, flats. It is now going slow because the domestic market is improving as well as prices,” revealed a source.

The Steel Authority of India, in a recent concall, said that its FY21 target in terms of total sales is 15 mn t of which exports would comprise 2.4 mn t. In fact, as a public sector unit, it has to achieve 100% utilisation rate and thus was surviving on exports to China too since the lockdown. Sources said, SAIL has never exported such quantities in the past and has even started exporting HRCs whereas, earlier, it was only semis, billets and blooms. As per the source, SAIL has exported more than 200,000 tonnes of only slabs starting May till August and has booked 100,000 tonnes of HRCs to China and Vietnam too.

With customers now coming back into the market, certain segments are showing signs of a pick-up in demand. However, none of the mills wants to hazard a guess as to what prices they could command for September bookings. “Deciding on the price two months down the line is too early for me,” said a source at a mill.

At the same time, with the markets opening up, and countries emerging from lockdown, prices have gone up over the last two weeks. South East Asia HRC prices are ruling at around USD 450-460 cfr today against around the previous USD 430-435 cfr Indian ports and mills feel these prices will go up further. Where exports to China are concerned, the lowest booking that took place in early May were at USD 385 cfr which are today at USD 455 cfr, which is an increase of USD 70 per tonne cfr.

Also with iron prices having gone up in a short span, most mills are attempting to hold on to their prices in the hope of getting a better realisation later on, an usual practice. “If iron ore stays at a level of USD 103-104 per tonne cfr China, then the mills will stick to their USD 430-440 fob levels for flats and USD 430 per tonne levels for longs and semis,” inferred a source.

“Export of semis, pig iron and slabs will continue from India because we are quite competitive at the moment… Iron ore prices are going up,” said a source at Jindal Steel & Power (JSPL), adding that exports during the current quarter will be quite high but next quarter, from October-December, is unpredictable.