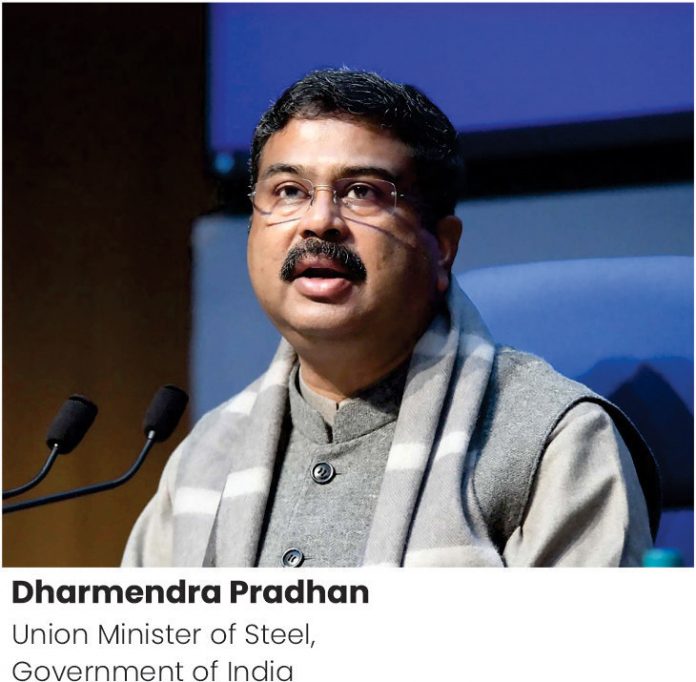 The 7% growth seen in the October-December, 2020-21 quarter has augured well for steel demand and this recovery trend is here to stay as the industry braces for a healthy 7-7.5% growth over the next four years. This growth would be spearheaded by infrastructure and building construction whose share in steel demand will rise from the current 62% to 66% by FY25, revealed the theme knowledge paper released at the recent webinar on “New Opportunities for Steel in Construction and Infrastructure”, organised by the Indian Steel Association (ISA).

The paper, jointly unveiled by ISA and Crisil, as its knowledge partner, further revealed that within construction, government-led initiatives on infrastructure and housing will continue to play a critical role given that it contributes nearly 30% of Indian steel demand. In fact, government-led initiatives are expected to rise further to 34% by FY25 with the umbrella scheme of the National Infrastructure Pipeline (NIP) being the flag bearer of this growth. “Nearly 40-45% of these investments are under construction and 35-40% in pre-construction phase which will pick up speed during the forecast period and be the fulcrum of growth,” said Amish Mehta, Chief Operating Officer, Crisil Limited.

Mehta said, “The theme comes at an opportune time when we see certain aspects related to investments around the corner. Be it deferral of infra capex since two years or a buoyant equity market and spurt in capital raising, or potential tail winds from China…”

Crisil derived the prospective growth numbers through a bottoms-up assessment of all projects listed on the NIP grid.

The paper, exploring the growth drivers for infrastructure and construction, and consequently steel demand, over the coming four years, said it is important to look at the long-term structural strengths and be prepared for the opportunities that would arise.

The paper said that construction would likely see a modest growth of 5-6%, led by three key drivers:

Around 1.2 billion sq ft of real estate is under development in the top 10 cities and due for delivery as per RERA deadlines in three years.

On the rural side, construction or conversion to pucca houses with 2-3 back-to-back good agricultural years augur well for rural housing.

Government-led initiatives on affordable housing will regain sheen after two dull years as nearly 30 lakh units are under construction in urban areas and around 39 lakh units have been approved.

However, infrastructure will see a healthy 8-10% growth helped by the NIP.

The government, under NIP, has an outlay of INR 111 lakh crore. While around 42% of the investments are under construction, 36% are in the pre-construction stage. What augurs well for steel is that the share of under-construction projects is higher in steel-intensive sectors like railways, urban infrastructure and roads. More than three-fourth of the projects (80-82%) are through the EPC mode, thereby, translating into higher public spend, and thus limiting risks.

Several projects under NIP will play a critical role going ahead. The largest is the Pradhan Mantri Awas Yojna (PMAY) where both urban and rural sides hold potential of consuming 40 million tonnes (MnT) of steel and contributing 5-6% of the annual steel consumption. The project was to be completed by 2022. Less than one-third of both rural and urban houses have been constructed till date. However, on the positive side, the pace of construction is relatively better on the urban side at around 35% while around 27% of the target is under construction and approvals have been wrapped up for around 36% which would potentially translate into the entire demand coming up for steel over the next four years.

In roads, the government’s scheme of Bharatmala, which aims to construct nearly 85,000 km, would mean at least 20 MnT of direct steel demand, not accounting for indirect impact of the construction. Healthy awarding numbers are seen in roads and the segment would be back to FY2019-20 levels in the current year.

National Highways Authority of India (NHAI) awarding in the current year has gone up 94% from April to October. 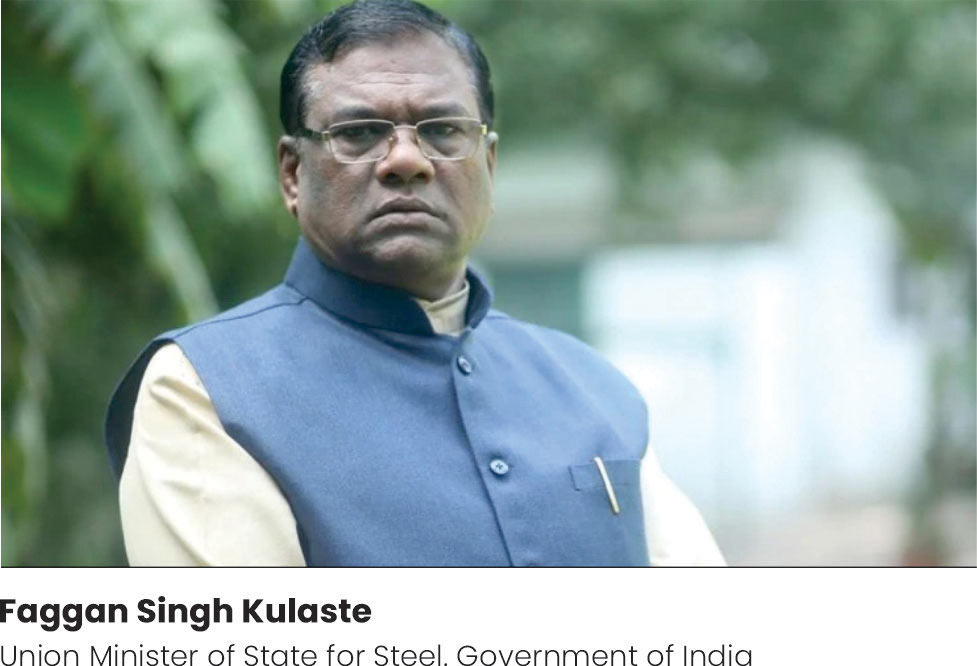 Railways’ Dedicated Freight Corridors (DFC) and Metro Rail projects will propel steel demand growth. Metro construction investments will see 1.3 times rise over the next four years against the last four years, led by the Mumbai Metro, some phases of the Gurgaon Metro and those in the southern cities. NHAI is also planning to set up wayside amenities every few kilometres which would necessitate associated infrastructure development.

It is also observed that India’s urbanisation rose marginally to only 34% against China’s 60% over the past 25 years which will provide great structural opportunity for the steel industry in the long term.

Speaking at the webinar, Steel Minister Dharmendra Pradhan said the mineral industry of India would be made export-centric through a big infrastructure support.

India has already started showing a v-shaped recovery curve across most sectors. From August, construction, auto and manufacturing sectors rebounded because of which there was a 7% growth in steel demand in the October-December quarter. The momentum is expected to continue into the final quarter of January–March, riding stalled construction projects. This shall limit contraction in volume to 9-11% this year.

The coming fiscal can see retracing to FY2019-20 peak levels of 100 million tonnes with a further upside depending on the vaccine’s effectiveness.

In the medium term, Crisil foresees 7-7.5% growth which would be above the trend line of the last decade and also mirrors 1-1.1 times multiples of GDP growth.

Areas That Would Drive Steel Demand

The share of construction (building and infrastructure) is 62%, the highest in India, and 55% for China and lower in other countries. The reason is China and Japan both have a higher base of machinery, engineered goods and automotive production while the US has relatively low steel intensity in its housing segment. 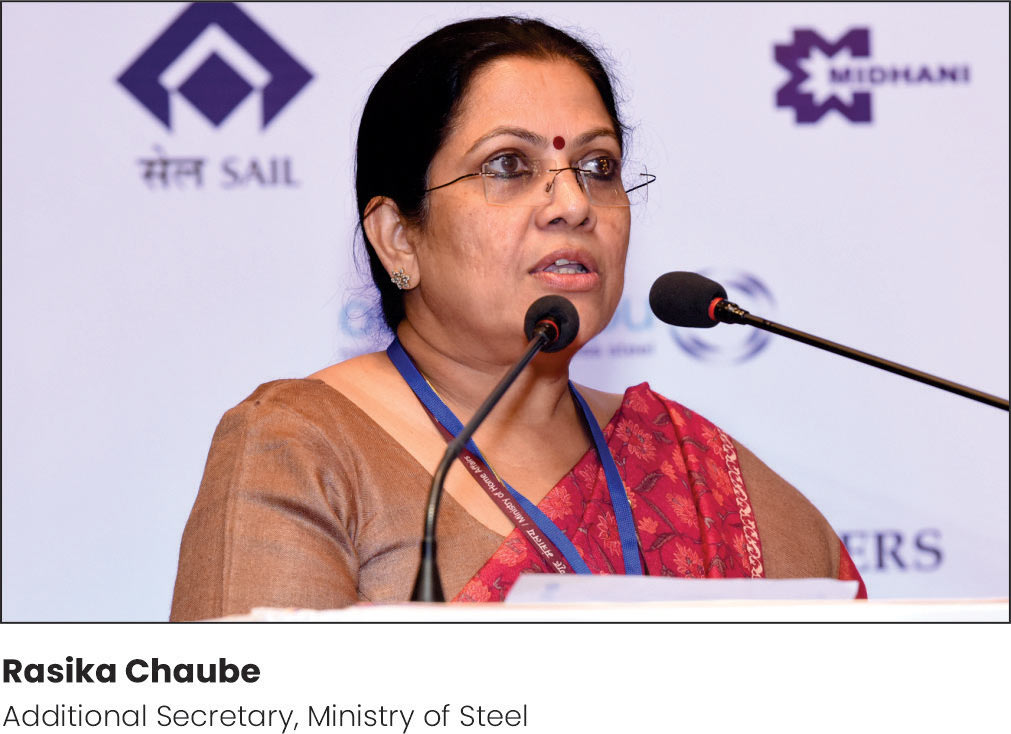 Rasika Chaube, Additional Secretary, Ministry of Steel, also present at the webinar, said feedback from the infrastructure industry is that the desired thickness of plates is not available in India which forces imports from China and elsewhere. An example is the Signature Bridge in Delhi where the maximum portion was procured and fabricated in China. Chaube stressed on the urgent need to critically evaluate future requirements, modernise, and upgrade facilities suitably.

The other critical area, Chaube said, is development of rolled products made of high strength and corrosion-resistant steel so that the cost difference between RCC and construction steel, about 30-40%, can be minimised.

Dr R.P. Swarup, Director General, Construction Industry Development Council, dwelling on two emerging areas of steel demand, said there is huge scope of work in the rural hinterland, especially after enactment of the farm Bill. The agri sector is set for a boom in terms of transportation, housing, storage etc.

He further said, in the last 25 years, almost INR 80 lakh crore of physical assets built in the country have aged which now require retrofitting and repairs. Steel has a role to play here too.

JSW Group Chairman Sajjan Jindal feels the industry needs to focus on 700-750 strength TOR steel in India which will reduce the tonnage in infra construction.

Pankaj Malhan, Whole-time Director, ESL Steel, stressed on high opportunities in the rural markets, need for creating infrastructure to connect cities to rural markets, and getting closer to the customer. He stressed on the “need of getting steel into buildings and buildings into steel”.

For projects to take off, land availability and single window approvals are needed which will not only give a fillip to steel but also the capital goods sector, which is steel-intensive.

As per Saptarshi Saha, Head, Plate Sales, Arcelor Mittal Nippon Steel India, it is imperative to look at two ways to increase steel consumption and intensity. 1) New opportunities, and 2) current opportunities where the industry is not cashing in as much as it should.

Urbanisation in India increased 4% in the last decade and is at 34%. In the next 2-3 decades, it is likely to go up by a similar percentage and by 2050 reach 50%, which would translate into huge opportunities for steel. Saha said: “There are two ways we can capture this opportunity. One is the huge number of residential buildings coming up and along with that utilites like pipelines etc. The second is the commercial and industrial building space. Currently, the latter is moving to steel but these have to be smarter.” 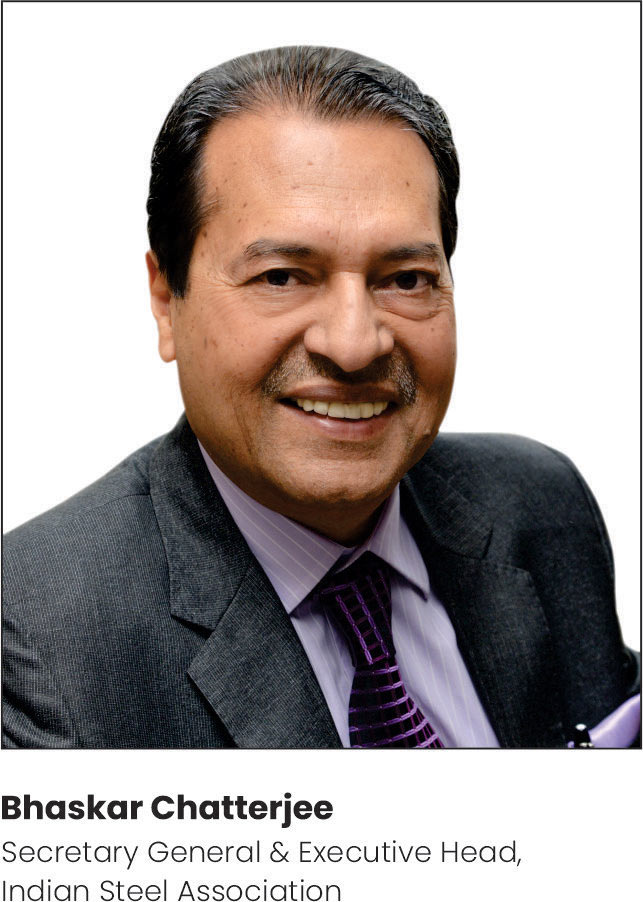 Dr Bhaskar Chatterjee, Secretary General & Executive Head, ISA, lauded the steel ministry for paving the way for new ideas and leading it in the right direction and pledged all support to it from the industry standpoint.

Swarup said the steel and construction industries do not talk as much as they should. There is a need to involve all stakeholders and offer solutions instead of just volumes to construction, said another official.

There is an urgent need to bridge the per capita steel usage gap, which is one-third of the global average, create greater awareness on steel usage, especially in rural areas, and take it to the next level.

It is important to move towards carbon neutral buildings. Rainwater harvesting, which has not been given enough thought, needs to be a part of all new commercial and industrial buildings. “Because, if not today, then tomorrow, we will have to look at our groundwater situation,” Saha stressed.

The government has sanctioned INR 6,322 crore for a production-linked incentive scheme (PLI) for specialty steel. Faggan Singh Kulaste, Minister of State for Steel, hoped the Indian Steel Association would work on further value addition and focus on specialty steel to bring in greater self-reliance in the sector.

SteelMint was the media partner to the webinar.