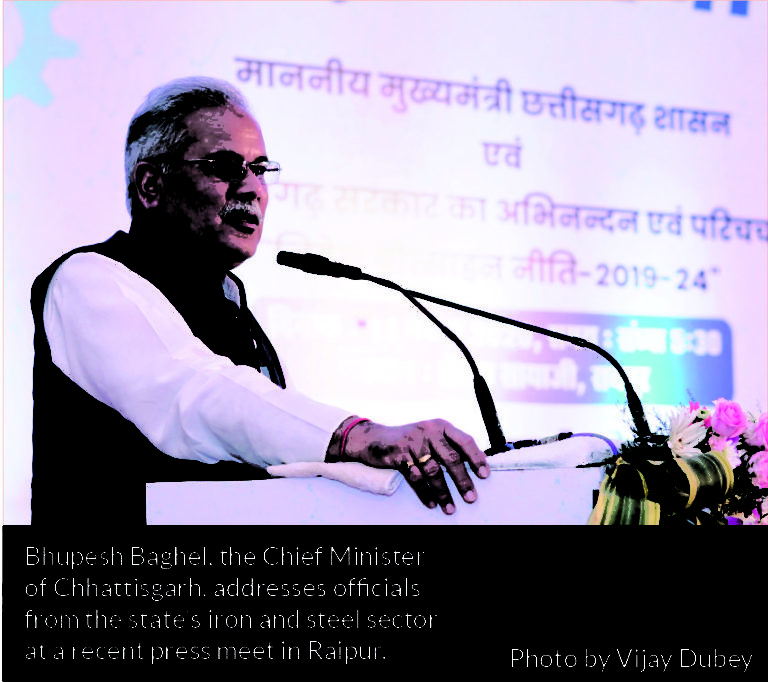 India’s annual sponge iron production was reported at 29.5 million tonnes (MnT) in financial year (FY) 2017-18. In FY2019 the same grew 15.25% y-o-y to 34 MnT and in FY2020 by 8.82% y-o-y to 37 MnT. However, industry players are extremely wary of stating whether the sector would grow at a similar pace this year. The pandemic and extended nationwide lockdowns have significantly impacted sponge iron prices, production and demand. 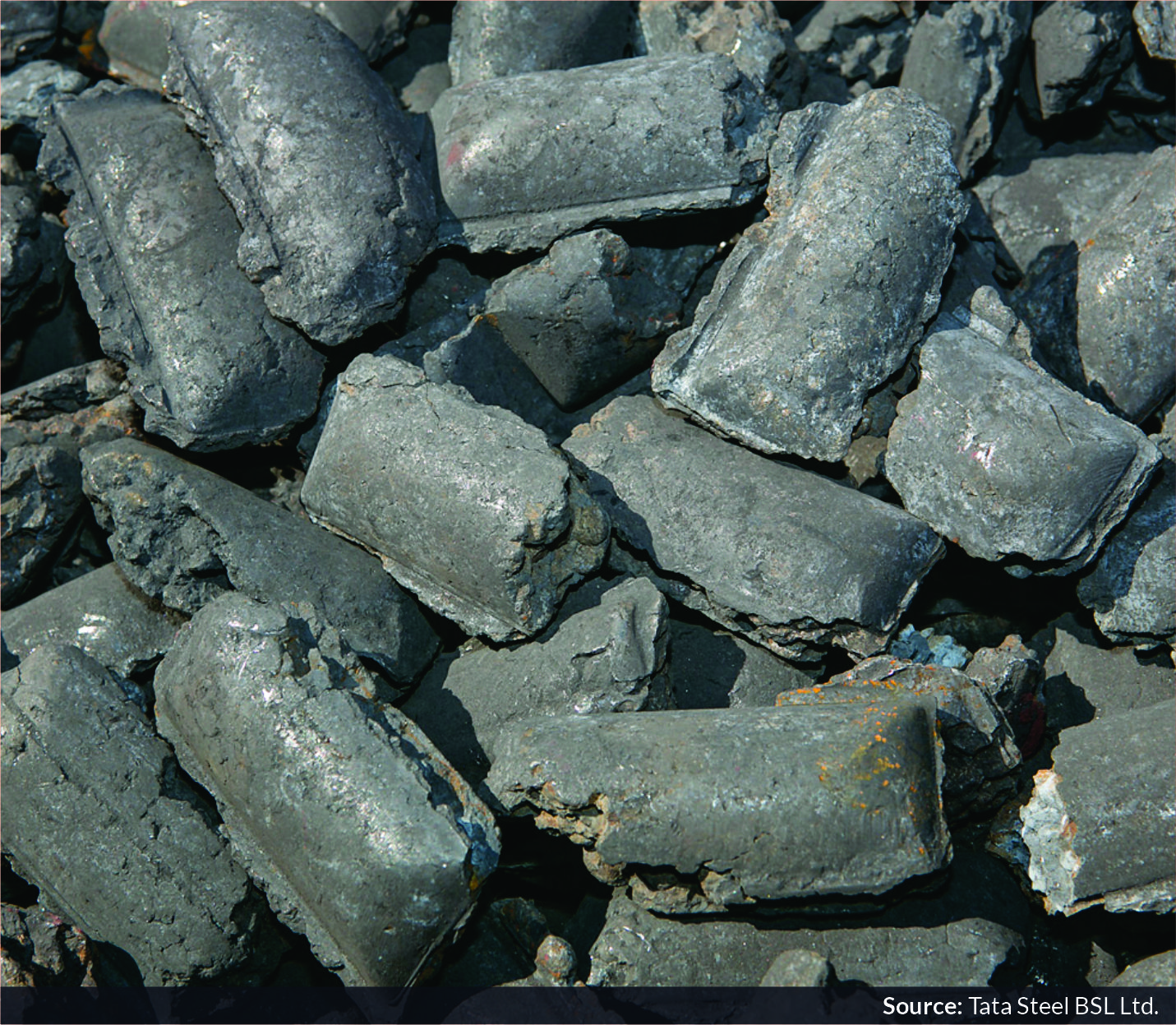 Deependra Kashiva, Executive Director, Sponge Iron Manufacturers Association (SIMA), said: “The year 2020 started on a promising note. Last year was not so good, although we had marginal growth, because of the economic slowdown. This has, in fact, impacted demand for sponge iron. We expected the economy to bounce back this year and demand of sponge iron to pick up sharply.”

However, by the end of March, the situation unexpectedly turned very bad due to the Covid-19 pandemic. As a result, from March 24, 2020, onwards, for at least two-and-a-half months, except for four or five big players, all sponge iron plants were either closed or were operating at a low capacity.

From June onwards, the situation started improving. Sponge iron producers began ramping up their operation despite facing a lot of problems like labour migration, liquidity and demand slowdown and, of course, the adverse impact of the coronavirus. In spite of these factors, plants’ capacity utilisation in the subsequent months started improving. In 2020, with one month (December) remaining, demand has increased substantially.

But acute shortage of iron ore is prevailing due to the cancellation of the iron ore mines in March, 2020 and subsequent reduction in mining activities from the 19 auctioned mines in Odisha. Sponge iron producers were expecting that the timely auction process would give a lot of relief and things would be back to the pre-cancellation scenario.

“However, the 19 mines, which were successfully auctioned, are not able to mine 80% of their environment clearance (EC) capacity and are not despatching to 80% of their EC capacity. This has seriously impacted availability and has resulted in a drastic increase in prices. I don’t see any relief from this situation unless both Central and state governments initiate quick actions,” Kashiva added.

Amidst the new challenges thrown by the pandemic, sponge iron makers also faced a raw material crisis this year. In fact, raw material availability has not improved even now. Iron ore lumps and pellets prices are increasing drastically.

“In the last week of November, I am surprised to see Raipur pellet prices have increased to INR 11,700 per tonne. In my more than 45 years of association with this industry, I have never seen this type of a rise in pellet and iron ore lumps prices,” Kashiva exclaimed.

“This price rise particularly impacts the secondary steel sector. If iron ore and pellets prices increase, naturally sponge iron prices will also increase. If sponge iron prices increase, billets prices will rise in tandem. As a result, prices of rebars will also go up. So, the adverse impact can be seen across the entire value chain,” he explained.

As per Kashiva, the government should immediately initiate remedial measures. It should ensure that production at National Mineral Development Corporation (NMDC), Orissa Minerals Development Company (OMDC) and Odisha Mining Corporation (OMC) should increase immediately and the 19 auctioned mines should produce and despatch to prescribed limits.

In spite of the shortage of iron ore, sponge iron production is increasing. As per JPC data, the negative growth in the sponge iron sector and crude steel from April to September, 2020, was around 21.5%, which has come down to around 17% during April to October, 2020. If the situation in the supply of iron ore increases, this gap will further narrow down.

Kashiva informed, “First and foremost, supply of iron ore at an affordable price should be a priority for the growth of sponge iron makers. The fortune of the industry is linked with the growth of the secondary steel sector.”

It seems some recent policy decisions of the central government are likely to badly impact small and mid-sized steel producers. The Ministry of Urban Development has issued a notification that CPWD will be buying rebars from the sponge EAF units with a minimum EAF size of 100 tonnes. It implies that 100 tonnes or more capacity EAF-based plants and that only the five major producers will be able to participate in the CPWD purchase programme and the remaining steel producers, whether a small induction furnace or a medium-size EAF with less than 100 tonnes, will not be able to participate. It also implies that this important segment of the Indian steel industry is out of the ambit of the purchase programme of the Urban Development Ministry.

The second development which will likely impact the secondary steel and, in turn, the sponge iron sector is the recent notification of the Ministry of Road Transport and Highways that says rebars produced from integrated steel plants will only be entitled to participate in the government purchase programme. It means that the induction furnace industry which produces around 30 MnT is out from this programme.

The festive season helped a lot in the revival of demand for steel and the Indian economy. Automobile and FMCG demand rose, while infrastructure projects are pushing steel demand in the country which in turn is pushing the demand for sponge iron.

“Steel makers are now being forced to increase use of sponge iron because the prices of scrap are sky high at around USD 350/tonne. These were at around USD 280 a few months back but shot up to USD 350/MT, and even at that price, the material is not available for steel makers who are dependent more on scrap especially in clusters like Mandi Gobindgarh. They are badly impacted, Kashiva revealed.

For the rest of India, plants want to use more sponge iron, but its availability is also restricted. Secondly, sponge iron prices are also very high because of the high cost of iron ore pellets.

“India cannot achieve its targeted production, as espoused in the Indian Steel Policy, by 2030-31 without the growth of the sponge iron industry. Sponge iron manufacturers are producing around 37 MnT per year,” Kashiva warned.

A much-discussed topic in steel circles in India and the world is that there will be a growing demand for sponge iron since steel will be produced using sponge iron and the EAF route and that the blast furnace route will be gradually phased out.

“The western world is moving away from the blast furnace because of Co2 emissions. Rather, they are trying to be carbon neutral, which means they are looking to use hydrogen as a replacement for coal,” Kashiva observed.

Analysts expect that, by 2045 or 2050, India will be carbon neutral, which means if we have to meet the ambitious target we have to move away from coal.

Kashiva said: “As of now, we do have many alternate resources available to produce sponge iron. The available options are non-coking coal, use of natural gas and coal gas or syngas, and coke oven gas.”

At present, non-coking coal is used for producing around more than 75% of the current sponge iron volume.

The natural gas-based route has now become attractive because of available  infrastructure and natural gas prices have also decreased.

The third option being pushed by the central government, especially the Ministry of Coal, is use of coal gas or syngas by the Indian steel industry for which they have declared certain incentives too.

“Yes, natural gas infrastructure is in place and available, and the natural gas prices are at the bottom, but the past experience of the steel industry indicates that there is no assurance on the continuity of its supply. Continuous supply of natural gas is a very big issue,” Kashiva explained.

However, although continuity in supply of coal gas can be achieved since India has large reserves of non-coking coal (a source of syngas), the downside is that the capex required is very high when using this route. In the natural gas-based route, with the development of infrastructure, it can be delivered at a sponge iron manufacturer’s gate without any new investment for producing the natural gas-based sponge iron.

Kashiva suggested that the problem of high capex can be resolved if the government /CPSUs come forward to produce and supply syngas to steel producers and develop the necessary infrastructure.

On February 1 of both years ex-Raipur prices were hovering at the same level of around INR 19,200/MT.

Soon after March 21, 2020, when prices were at around INR 16,750/MT, the Indian government announced a nationwide lockdown and production was stopped everywhere. As per reports, plants had either curtailed or shut down production amidst the lockdown period.

In July 2020, prices started climbing up slowly and by month-end, reached INR 17,300/MT. In July, it was observed that sponge iron prices plunged owing to falling billets prices on lack of demand and curtailed capacity utilisation by ingots/billets manufacturers (at about 60-70%).

In August, 2020, sponge iron offers rose sharply by INR 1,500-3,200/MT due to rising raw material prices along with much better demand for sponge iron on account of high-cost substitute products. On August 17, 2020, prices touch INR 21,500/MT. On the same date in 2019, prices were reported at around INR 16,000/MT. By end-August, prices got good support from supply shortage and high-cost substitutes. A price gap of around INR 4,000/MT remained between the prices of 2020 and 2019 by the end of August.

In September prices fell slightly but maintained an average of INR 19,400/MT. Rising raw material prices amid less availability of material due to the rainy season significantly affected prices. The average price for September 2019 was at around INR 16,280/MT.

In October, prices started climbing up again and by the end of the month peaked at INR 21,900/MT while maintaining an average of INR 20,150/MT against around INR 15,680/MT in October last year.

Chhattisgarh is among the major sponge iron producing states in India. The state government has introduced a new industrial policy to provide a special incentive package for investment in mega and ultra-mega projects in the sponge iron and steel sector. Under this policy, new units starting commercial production with a long-term capital investment of INR 100 crore will be eligible for economic investment promotion.

To avail the benefits of this new policy, it is mandatory for proposed units to start commercial production on or before October 31, 2024.

Also, the region-wise subsidy limit has been increased from 60% to 150% for the sponge iron and steel sector, and an investment incentive of a maximum of INR 500 crore, and for Bastar, INR 1,000 crore, has been offered.

At the time of writing this news, INR 35,000 crore worth of memoranda of understanding (MoUs) have been signed so far under this policy.

Bhupesh Baghel, the Chief Minister of Chhattisgarh, said the plants will source raw material like iron ore and coal locally, but if the raw material is not available in the state only then can plants source the same from outside. Directives to NMDC and CMDC have been given for supplying raw material to new plants, he said.

The government has also given assurance on availability of iron ore, coal, land (for setting up new plants), and water. Core sector industries in the state are eligible for subsidy in electricity charges.

Kawasi Lakhma, Minister of Commerce and Industry, government of Chhattisgarh, has asked industry players who have signed MoUs to ensure they take effective steps over the next six months. 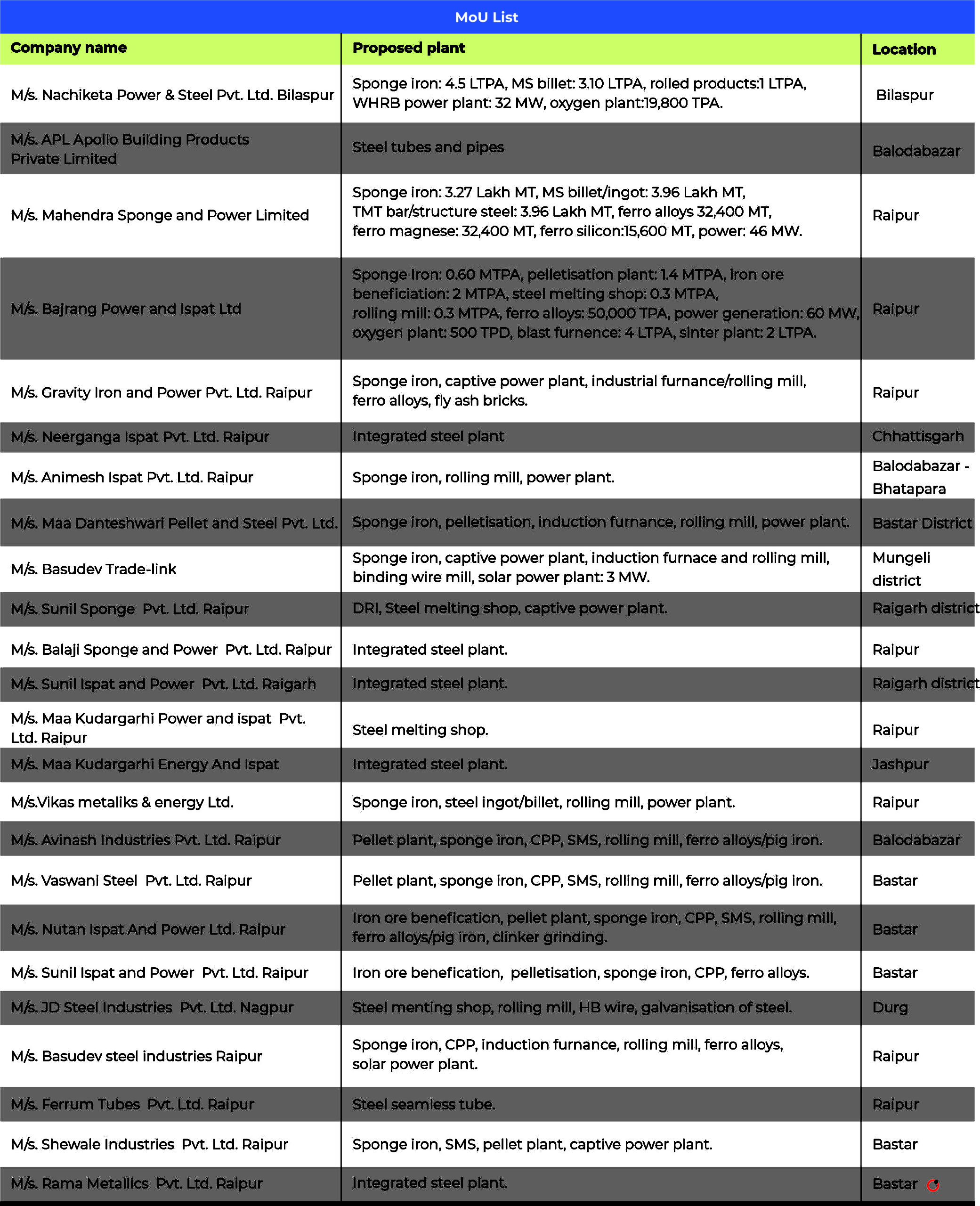