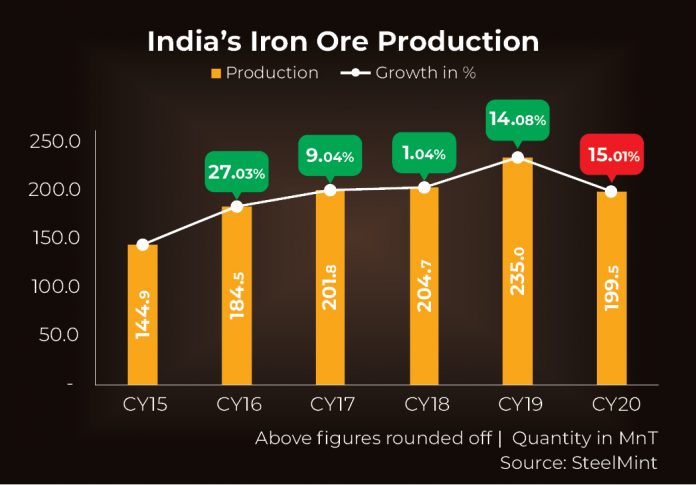 India’s total iron ore production volume, which had been on a continuous positive growth track since the past five years, saw a significant decrease this year. Production of this key steel-making raw material in India in calendar year (CY) 2020 touched 199.5 million tonnes (MnT) compared to CY19’s 235 MnT, dropping 15.1% year-on-year.

One of the key reasons behind the fall in Odisha’s iron ore production is that a lot of time was taken up in  exchanging ownership of the auctioned mining leases.

National Mineral Development Corporation (NMDC) Limited, India’s largest iron ore producing company, recorded 31 MnT of production in CY20. However, the last calendar year cannot be considered favourable for NMDC as the company’s total production dropped 4.91%. It is to be noted that this is the second consecutive year in a row when the company’s production volume has gone down. In CY18, NMDC produced 33.1 MnT of iron ore and in CY19, 32.6 MnT. 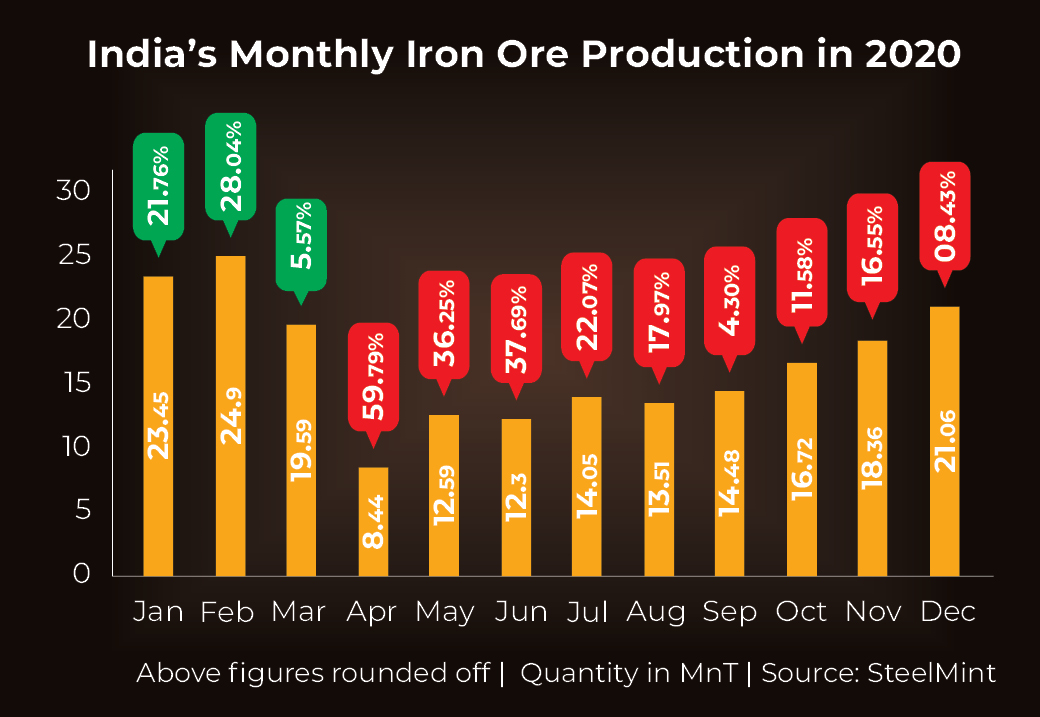 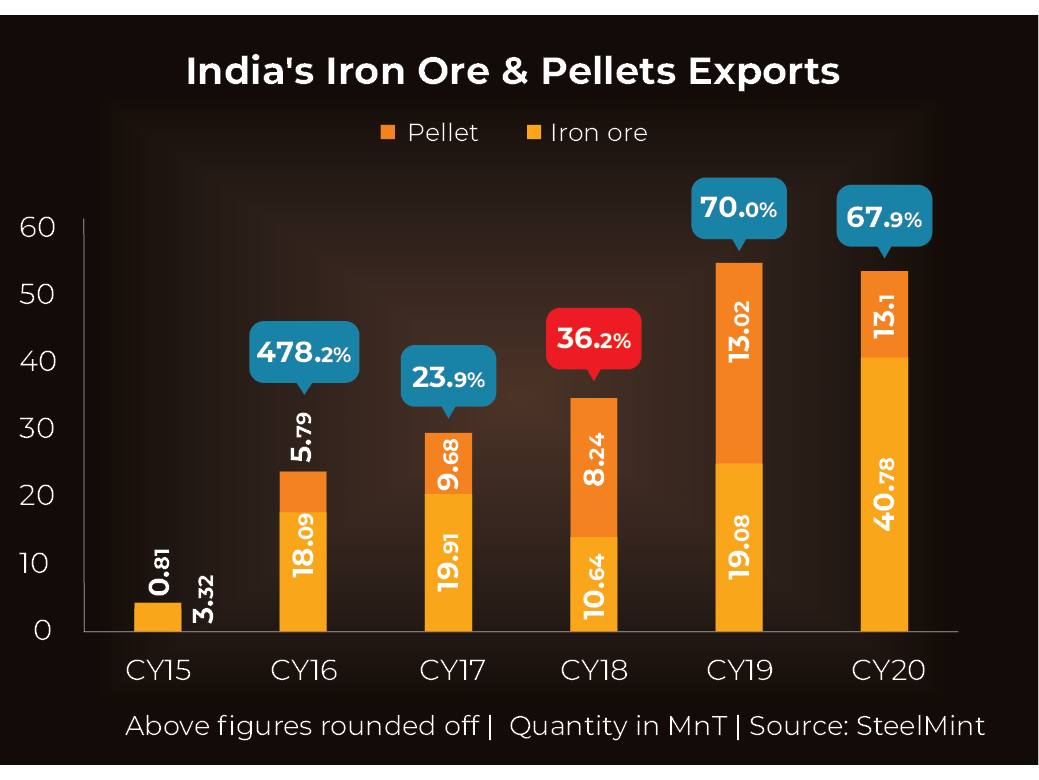 In addition to high prices, iron ore inventory levels at Chinese ports witnessed a significant fall from 130 MnT at the beginning of CY20 to as low as 108 MnT by June 2020, as per SteelHome data.

Coronavirus disease, a pandemic that shook the world, raised various concerns over the global availability of iron ore throughout the year. Amid rising Covid-19 cases at the iron ore mine in Itabira, Brazil, owned by Vale, Brazilian supplies of iron ore cargoes got impacted severely. Vale revised and reduced its CY20 production target to 300-305 MnT as against the previously set 310-330 MnT. 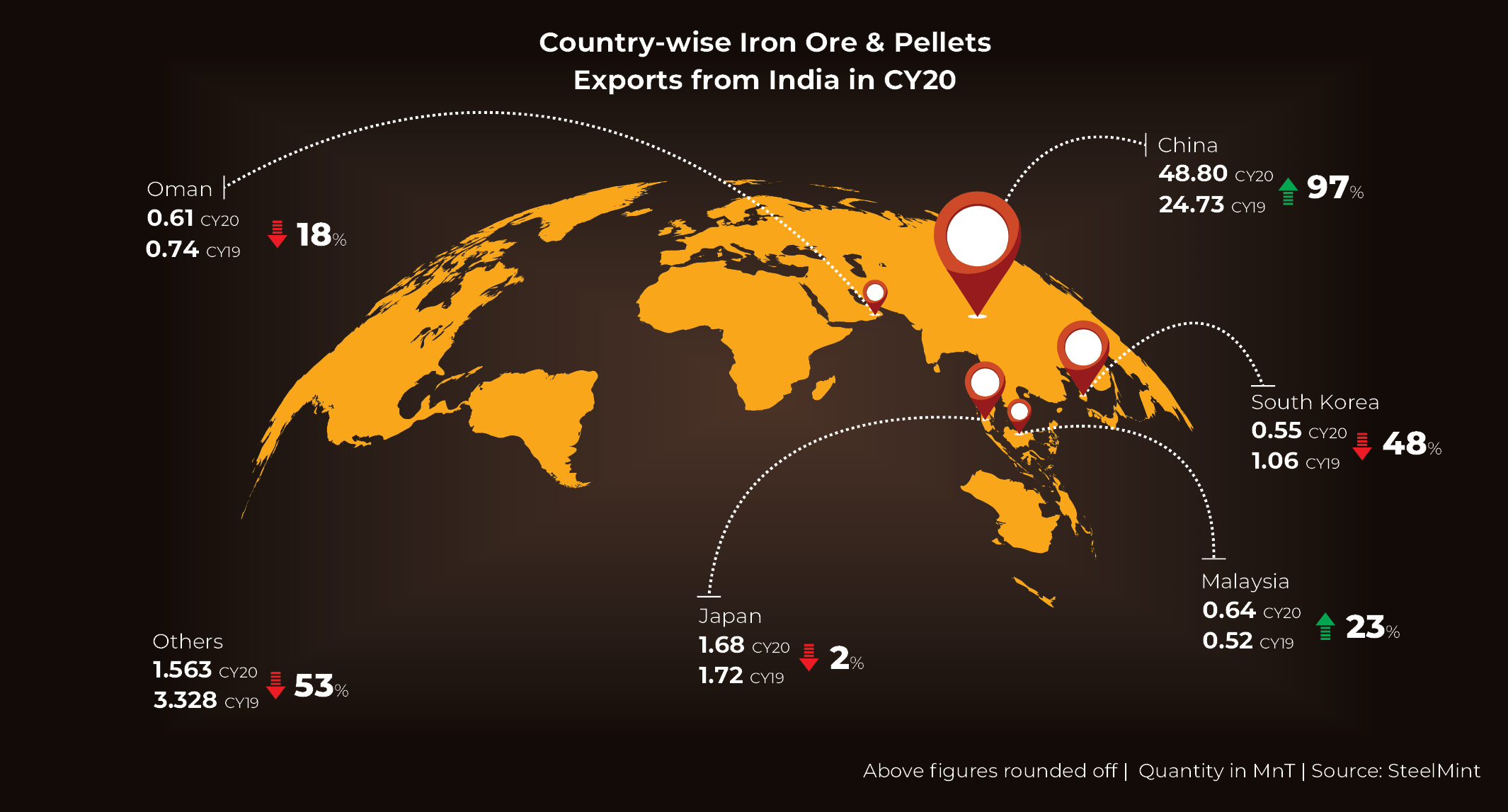 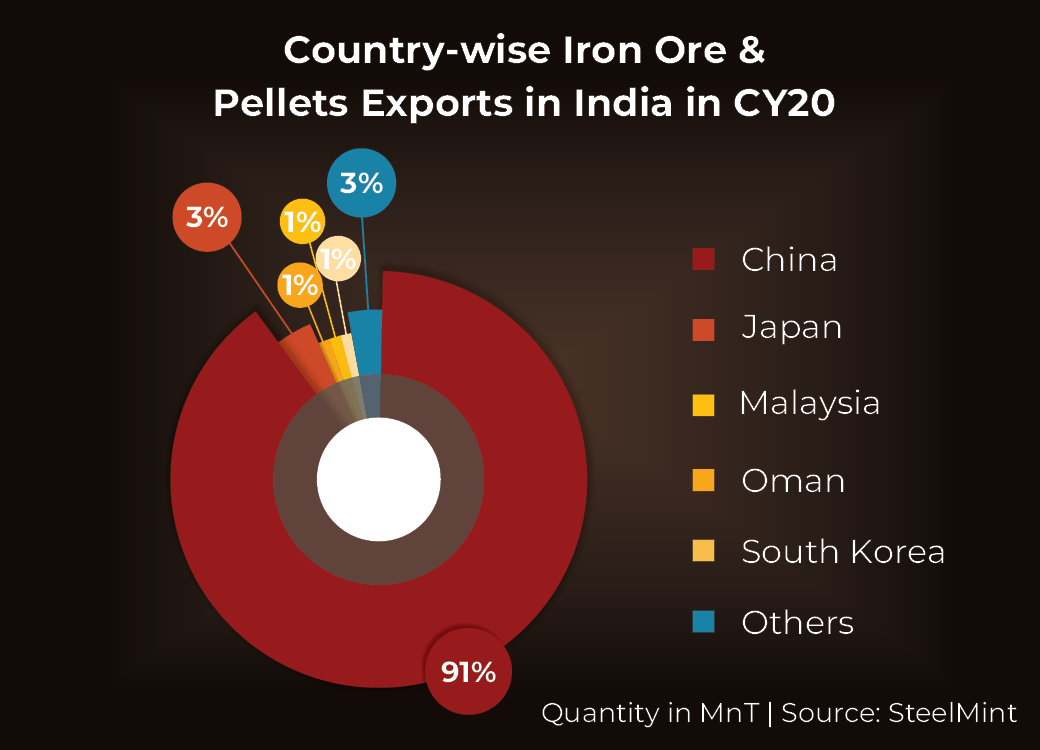 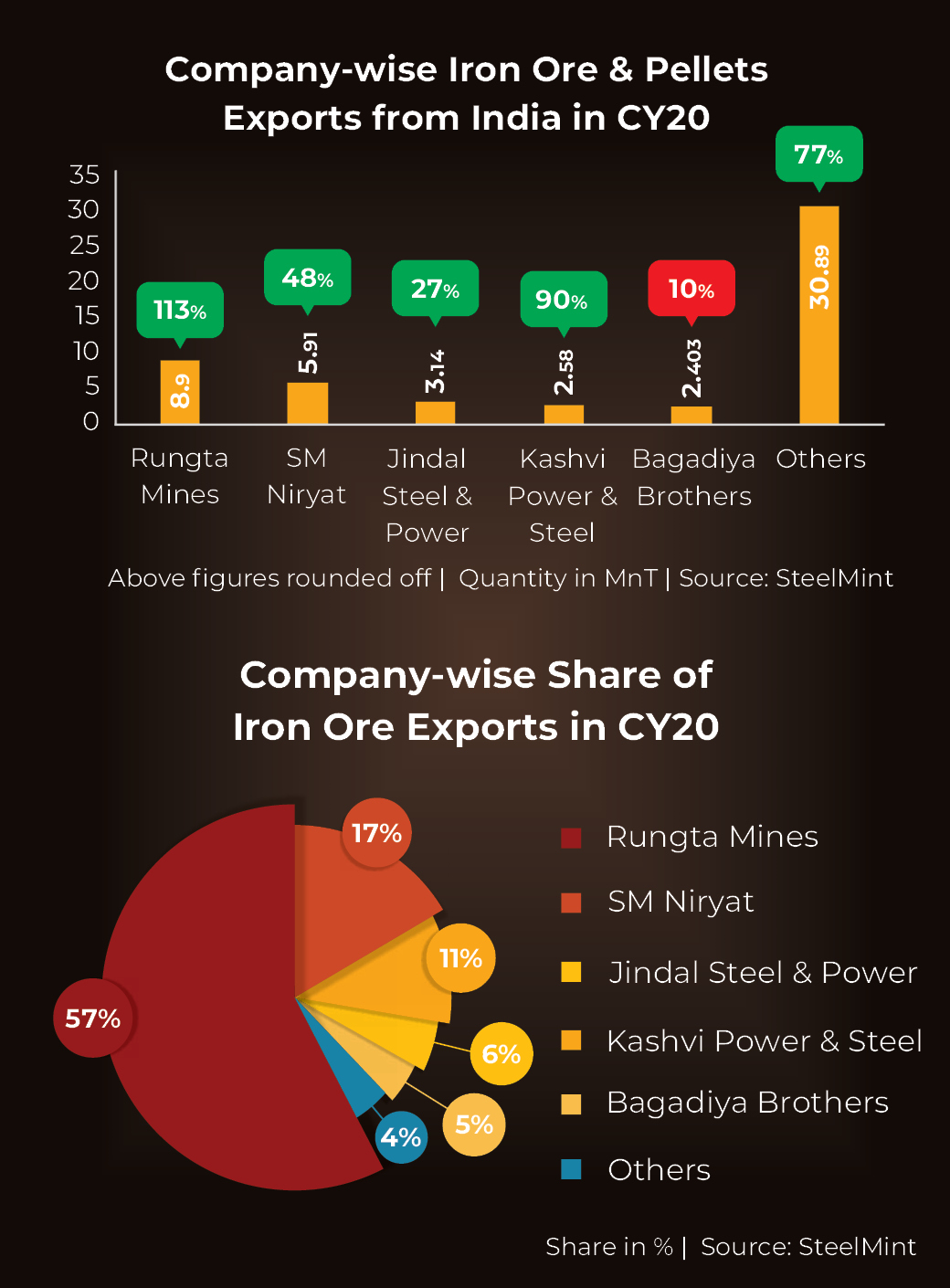 In CY20, Rungta Mines secured the top spot by exporting 8.9 MnT of iron ore. Compared to CY19, the company’s iron ore exports increased 113% in CY20. S.M. Niryat is in the second spot with exports of 5.91 MnT followed by Jindal Steel & Power at 3.14 MnT. Interestingly, Odisha-based Kashvi Power & Steel Private Limited’s exports grew by a whopping 90% to 2.58 MnT last year from 1.36 MnT in CY19.

Paradip remained the largest iron ore exporting port in CY20. This year, the port’s iron ore exports increased 59% to around 20.98 MnT against CY19’s 13.22 MnT. Vishakhapatnam Port is in second spot at 7.37 MnT and Gopalpur Port in third, with around 5.67 MnT. 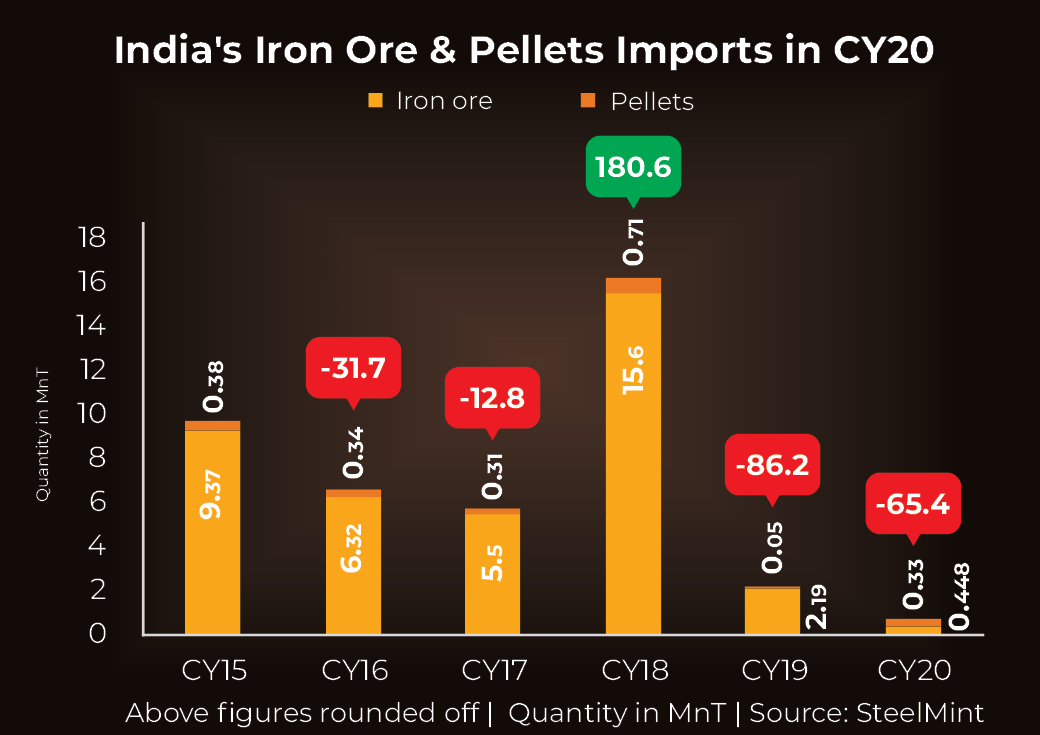 Taking a look at the past five years’ data of India’s iron ore imports, it can be seen that India imported the least quantity of iron ore in CY20. According to industry analysts, higher landed cost of imported iron ore resulted in domestic steel mills preferring domestic substitutes of lumps and pellets, leading to very low imports reported in CY20. For instance, in CY20, average Odisha iron ore (Fe63 fines) prices were reported at around INR 3,200/MT.

The major share of iron ore and pellets imported into India in CY20 was from Bahrain and small portions from South Africa and Ukraine. 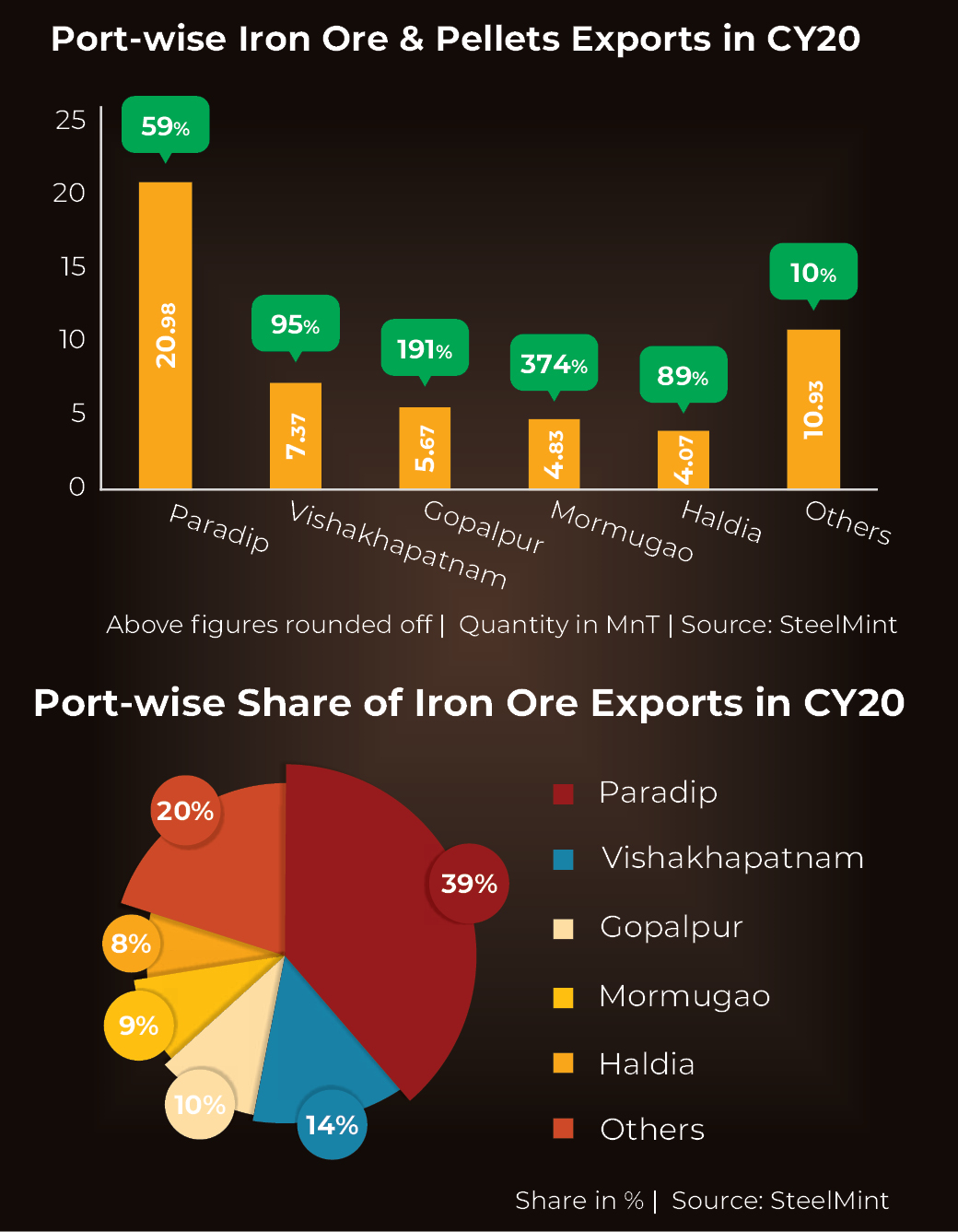 Around 63% of the total iron ore and pellets imported were by AM/NS India (a joint venture between ArcelorMittal and Nippon Steel), whereas the remaining small quantities were imported by Mono Steel and JSW Steel.

The highest price was recorded in the month of December at INR 8,800/MT, while the lowest price was observed in May-June at around INR 3,450/MT. 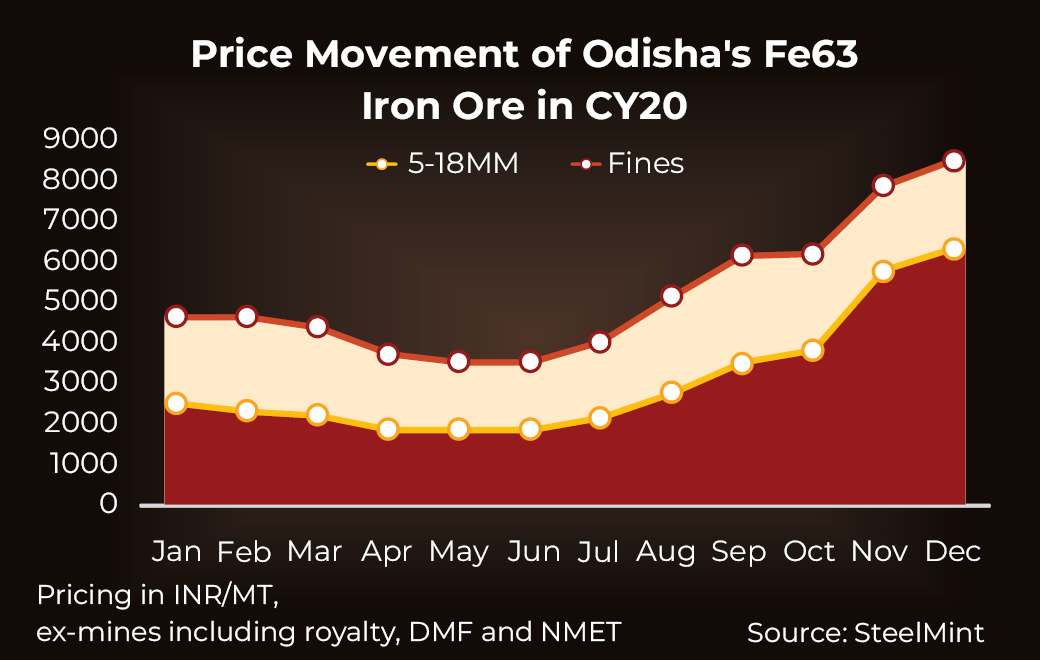 The average annual price of Odisha’s iron ore fines of Fe63% were at INR 3,200/MT. Prices peaked at INR 6,500/MT during mid-November, while the lowest was observed during May-June at INR 1,900/MT. 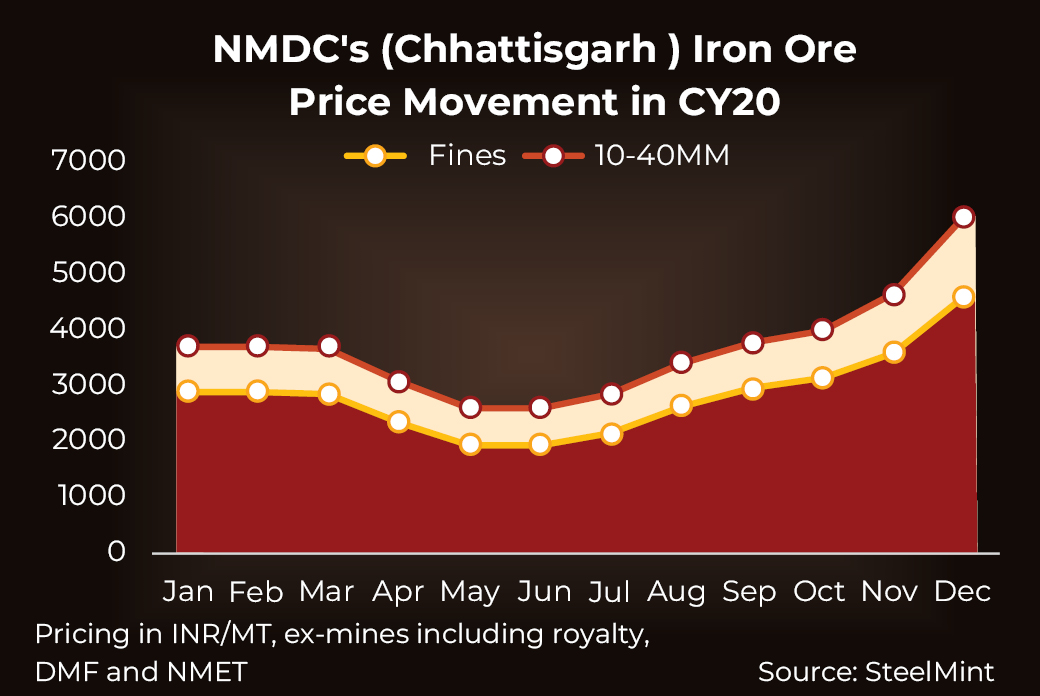 Indian pellets exports remained on the higher side during Q2, CY20 due to a variety of reasons. As per analysts, dull Indian domestic demand due to the pandemic increased Chinese demand. There were supply constraints from Brazil amid rising Covid cases along with closures at the Timbopeba and Malaysian distribution centres for half of the quarter. All these factors impacted the global trade. 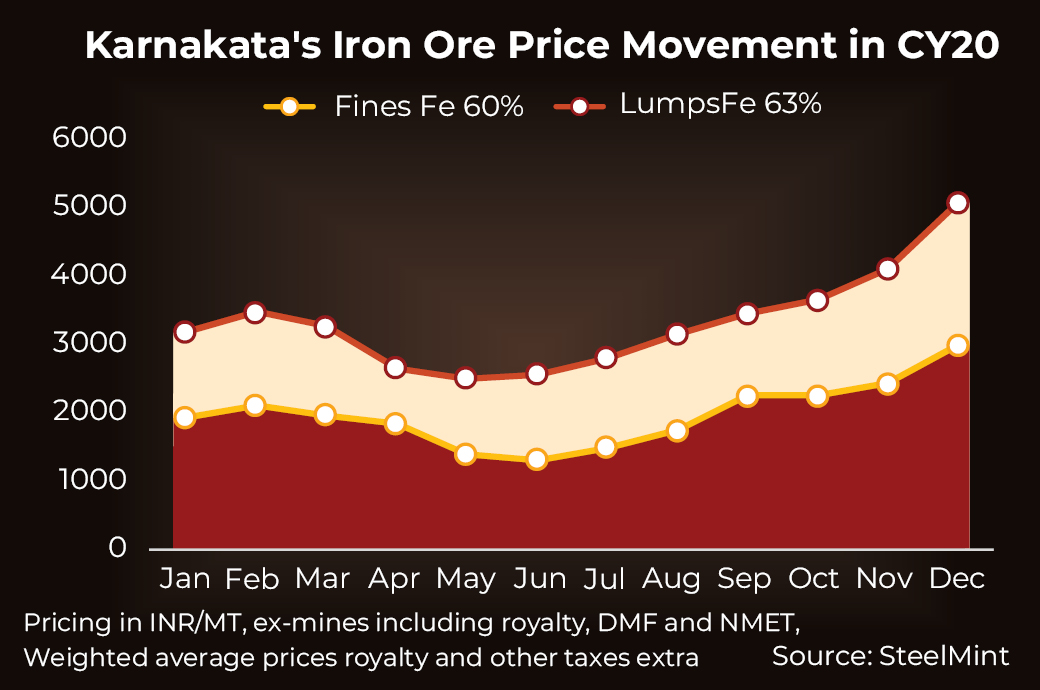 However, with gradual unlocking measures adopted in India, steel demand picked up, resulting in improved domestic pellets usage. Pellets prices in the domestic market surged, backed by tight availability of high-grade iron ore in Odisha, as the majority of auctioned mining leases were still struggling to resume production. Domestic pellets prices for Barbil increased from INR 5,625/MT (loaded to wagons) in June 2020 to INR 11,095/MT in December, 2020.