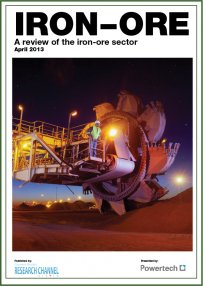 Creamer Media has released a business report titled Iron Ore 2013, A review of the Iron Ore Sector. The report priced at US$ 350 provides a in depth outlook and commentary on the state of the global steel sector.

Extracts from the Report are given below :

The iron-ore mining industry, like other economic sectors, was pummelled by the 2008 worldwide economic downturn. However, thanks to stimulus packages introduced in 2009 resulted in the industry’s recovery in 2010 and 2011, with prices hitting highs of $193/t as steel output reached record levels. The price rally was shortlived as prices dropped sharply in 2012, hitting a three-year low of $86.70/t in September that year.

Prices have since recovered again, but several analysts forecast that the iron-ore sector will experience difficult period over the next 12 to 18 months, owing to excess supply and projected slower steel output in China. The long-term outlook for iron-ore remains positive, albeit cautious, with the world’s biggest iron-ore miners – Vale, Rio Tinto and BHP Billiton – expecting China to be the major demand driver for the mineral until the end of the 2020s, when India and other developing countries are expected to take lead as Chinese growth diminishes.

This report is a summary of information published in Engineering News and Mining Weekly, as well as information available in the public domain.

The report does not purport to provide analysis of market trends.

The report can purchased here.