The Union Cabinet recently ratified a raft of amendment proposals put forward by the Ministry of Mines (MoM) that seek to enhance minerals production in the country, with the twin objectives of attaining self-sufficiency and increasing the share of mining to the country’s GDP.
The Mines and Minerals (Development & Regulation) Act, 1957 (MMDR Act) was amended in 2015 to usher in the auctions regime which envisages transparent allocation of mineral resources. The amendment proposals aim at facilitating the ongoing transition to the new regime by seeking to ensure sustained production and despatches from newly auctioned mines and mitigating the possibility of disruption and shortfall in minerals production.

The main thrust of the proposed reforms is to boost mineral dispatches from the mines auctioned in Odisha in early 2020 and the government has sought stakeholder feedback on the steps mulled to augment mineral production. In view of the prevailing iron ore shortage that weighs heavily on downstream steel producers, the MoM has proposed to amend the Minerals Concession Rules, 2016 (MCR) in order to strengthen the minimum dispatch rule for miners failing to meet production and dispatch targets.
Rule 12A(1) of MCR, 2016 states that all new lessees conferred with vesting orders are required to ensure a minimum despatch of 80% of the average annual production of the two immediately preceding years on a pro-rata basis.
The new sub-rule that the MoM seeks to insert into the existing framework states: “In case the lessee despatches less than the minimum dispatch required under sub-rule (1) on a quarterly basis, the lessee shall pay at least the amounts payable under Rule 13 of the Mineral (Auction) Rules, 2015 for the quantity equal to the minimum dispatch required under sub-rule (1) on a quarterly basis.”
This means that the successful bidder has to make a payment equivalent to the revenue share and other statutory levies that would have been payable at the prescribed level of minimum production/despatch on a quarterly basis.
Moreover, the draft notification states: “In case the lessee does not maintain minimum dispatch… for three consecutive quarters, the state government may terminate such lease.”

The proposed amendment is significant on several counts. To begin with, availability of iron ore was disrupted as a result of the non-operationalisation of many iron ore mines and/or delayed and lower than stipulated production from those mines, the leases of which had expired in March, 2020. Iron ore production in the country as on September, 2019 was 110.95 million tonnes (MnT), whereas, during the current financial year, production up to September, 2020 dropped to 76.01 MnT – a decline of 31.5%. In Odisha, production dropped by over 30 MnT in the April-November, 2020 period. This resulted not just in iron ore prices shooting up manifold but also a grave supply crisis for those without captive mineral sources.
Anticipating a disruption in supplies post-auctions and to ensure seamless transfer of leases, the MoM had, under Section 8B of the MMDR Act, provided that during the first two years from the date of execution of a new lease, the new lessee “will have the order of vesting of rights, approvals, clearances and licences” to start production and also ensure minimum despatch of 80% of the average production of the last couple of years. The purpose of this rule was defeated as production didn’t resume even 7-8 months after the auctions.
Another reason why the proposed amendment is significant is that the government has mandated a quarterly dispatch target for the new lessees many of whom were unsure whether total dispatches would be calculated on an annual basis like other Mine Development & Production Agreement (MDPA) targets. This has been done to avoid excessive environmental load by staggering production and better fiscal management by the states.
“In view of the fact that the restart of mining operations in such mines after fresh auction may take a long period as the new lessees have to obtain about 20 statutory clearances, approvals, etc from various Central and state government authorities and in order to prevent the impact of the expiry of the leases on the supply of iron ore in the country, further amendment was made in the MMDR Act in 2020, inter alia, to insert Section 8B in the Act,” the MoM draft amendment note states.
Despite this legal provision, “several successful bidders of such working mines (whose previous mining leases have expired on 31st March 2020) have not started production even after the lapse of 7-8 months of auction and execution of mining leases in their favour. Further, many of the successful bidders who have started production, have not maintained the production and dispatch quantity up to the level required under Rule 12A of the MCR,” the MoM note states.
Therefore, the government has proposed to amend Section 8B to provide that “all the rights, approvals, clearances, licenses and the like that are granted to a lessee in respect of a mine shall continue to be valid till exhaustion of mineable reserves in the mine and on expiry or termination of lease, such clearances shall be transferred and vested to the successful bidders of the mining lease selected under the MMDR Act”. 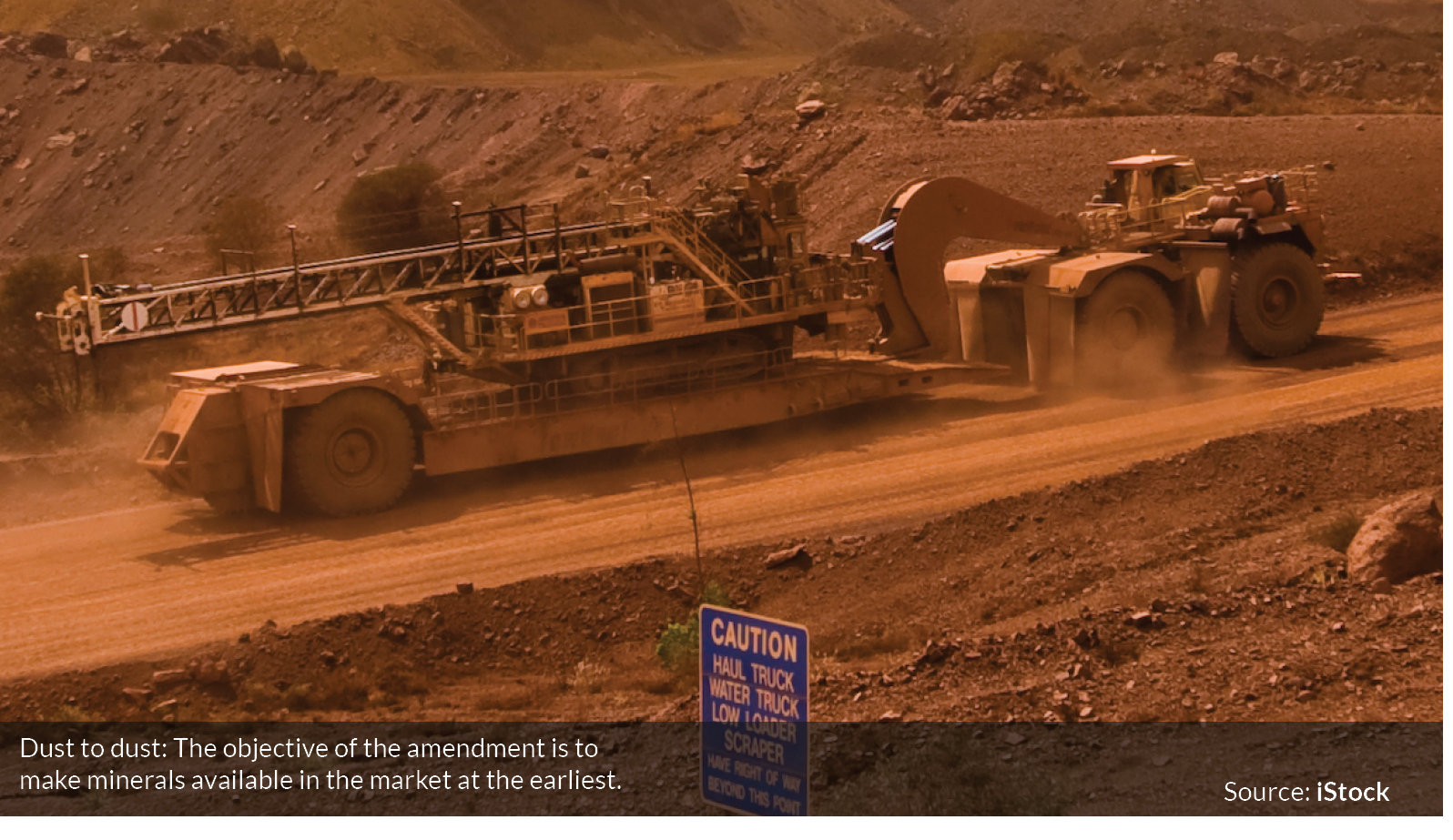 While miners have to cough up an amount in case of lower than stipulated dispatches, there is also an incentive for starting production early from the auctioned mines. The MoM has proposed to insert the “proviso” in the Mineral (Auction) Rules that “the lessee (of a fully explored mineral block) shall pay only 50% of the amount… for the quantity of mineral produced and despatched earlier than the scheduled date of commencement of production as given in the tender document.”
The incentive on payment of amount quoted under Rule 8 of the Mineral (Auction) Rules shall be applicable on “the quantity of mineral produced and despatched between actual date and the scheduled date of commencement of production”.
Therefore, a successful bidder who has the vesting orders can opt to start production as early as possible to avail of the incentive. If the tender document, for example, mentions January as the month of commencement of operations, the leaseholder would like to start operations in November or December in order to secure a 50% rebate on the quoted revenue share.
A report prepared by a high-level committee headed by the Vice Chairman of NITI Aayog on mines, minerals and coal sectors had recommended that providing an incentive to successful bidders for early commencement of production from the auctioned mines was necessary.
“It has been decided to provide in the Mineral (Auction) Rules, 2015 that for fully explored blocks, there would be a 50% rebate in the quoted revenue share… The incentive will encourage the lessee to operationalise the mine and start production at an early date thereby increasing mineral production,” the MoM’s draft amendment notification states.
As per recommendations of the high level committee, the MoM may also adopt the methodology adopted in case of commercial auction of coal blocks with the target of quickening the pace of mining operations of auctioned leases. The objective of the amendment is to make minerals available in the market at the earliest to feed many key industries.

This urgency in bolstering mineral supplies in the market as the economy recovers fast after lifting of the lockdown in the country is also attested by the fact that the government has proposed to allow captive mines to sell up to 50% of their annual mineral production in the open market.
An “additional amount” will be levied on such sale from the non-auctioned mines. This additional amount has been fixed at 2.5 times of the royalty payable for iron ore lumps and 1.5 times of the royalty for fines, while for chromite (40% and more of Cr2O3 and concentrates) and manganese (35% and above Mn content) the rates are two and five times of the royalty respectively. For sales from auctioned captive mines the additional amount is 50% of royalty. The Ministry of Coal will decide the rate to be levied on sale of coal from captive blocks.

Moreover, in a significant new development, the MMDR Amendment Bill, 2021 proposes that an additional amount will be charged for extension of mining leases of both coal and non-coal government companies. The government has proposed that all PSU mines that came up for renewal after 2015 have to pay 1.5 times of royalty to the state governments.
Presently, the royalty for iron ore miners is 15% of the IBM’s average sales price (ASP) and the Central government has proposed an additional 22.5% to be paid to the concerned state governments, as in the case of the renewal for 20 years of NMDC’s contentious Donimalai iron ore mine in Karnataka.
It deserves mention that the “additional amount”, which is 1.5 times of the royalty, will be applicable in case of NMDC’s iron ore mines in Chhattisgarh too.
Moreover, the non-operational auctioned mines in Odisha – Guali and Jilling Langalota – that have been given over to state PSU miner OMC will also have to bear this additional amount as OMC is a government company. However, there is no specific mention whether the additional amount being earmarked for PSU miners will be on a retrospective or prospective basis. Therefore, there is no clarity that NMDC’s Chhattisgarh mines, which recently received a renewal, will have to bear the additional amount. However, some of OMC’s mines or those operated by steel major SAIL that are due for renewal in a few years’ time would have to bear the additional amount.
Keen to put more blocks under the hammer to augment production, the MoM has also proposed that in case the state governments fail to hold auctions or face obstacles, the Central government would conduct mineral auctions to ensure sustained production. However, the revenue for such blocks would accrue to the state governments.