Orissa Mineral Development Company is likely to resume mining operations at its Bagiaburu iron ore mine by October, Steel360 has learnt from reliable sources. This decision comes on the heels of the recent Supreme Court order allowing OMDC to resume mining operations at all three mines, Bagiaburu (iron ore), Belkundi (iron ore and manganese ore) and Bhadrasahi (iron ore and manganese ore). These are part of the six mines that it had received some years back from the state of Odisha.

The decision comes after the company made the court-ordered payment of compensation in a case.

A high-ranking official at Rashtriya Ispat Nigam Limited (RINL), of which OMDC is a subsidiary, said, there are two issues for which OMDC had gone to the Supreme Court (SC). One was to allow it to start its mining operations and secondly, to also allow it to sell the stocks lying in the mining pits.

Although the apex court has allowed resumption of mining operations at all the three mines, the order has come with a clause that the company will have to take all the necessary approvals.

Where the approval status is concerned, the official informed that with regard to Bagiaburu, the environmental clearance (EC) is at an advanced stage. “And here we have moved a tender proposal to fix an MDO for the mine too,” the official said, adding, “For Bagiaburu, we had been thinking of starting production in September, but October would be the probable month to start mining operations there.”

Where the other two mines are concerned, OMDC has applied for forest clearance (FC) which is under processing. Once the FC is received, only then can OMDC get the EC. However, the pandemic is getting in the way of resumption of mining in the other two blocks and “is going to take some time” the official informed. In order to get the EC for these two mines, a public hearing is required. But, because of COVID-19, the public hearing criterion is not being fulfilled, since it would involve assembly of people at a point. “The Collector has got the instruction from the Pollution Control Board to carry out the public hearing. But his office is not being able to conduct the same because of the pandemic,” the official indicated.

“But everything has been cleared in the sense that there is a green signal from the government that we can go ahead with the mining operations and that is applicable to all the three mines,” the official said.

The total available stock to dispose of is not very high, at around 3 lakh tonnes and this volume has been lying there since around 2010-11, it is learnt.

However, more importantly, the EC limit is around 4 lakh tonnes per annum of production from the three mines, the official informed. All the three mines together have reserves in excess of 110 million tonnes (MnT). Bagiaburu has reserves of 4.96 MnT of iron ore in which the EC limit is 0.36 MnT per annum. Belkundi’s iron ore reserves are at 25.53 MnT and manganese ore, at 15.88 MnT. The EC limits are 1.8 and 0.3 MnT respectively.

Several applications were filed in the Supreme Court by OMDC seeking permission to resume regular mining operations at the Roida-Bhadrasahi iron ore and Bhadrasahi iron and manganese blocks in Odisha.

It is expected that resumption of operations by OMDC will alleviate the tight supply situation to some extent, however negligible. Interestingly, this development has assumed a new significance in the context of a 5 MnT per annum greenfield steel plant – a POSCO-RINL joint venture – that is likely to be set up at Visakhapatnam for which a joint working committee comprising RINL officials as well as those from the South Korean steel giant is being formed under the aegis of the Ministry of Steel.

As per information available, the three mining leases of Dalki manganese mines, Kolha Roida iron and manganese mines, and Thakurani iron and manganese mines are in the name of Bharat Process & Mechanical Engineers Limited (BPMEL) under the Ministry of Heavy Industry. OMDC was allowed to lease these three resource-rich mines that the state government had originally leased out to BPMEL. BPMEL had contracted OMDC in 2003-04 to mine at these three sites on its behalf. When the approvals expired in 2006-07, the three sites were shut down. 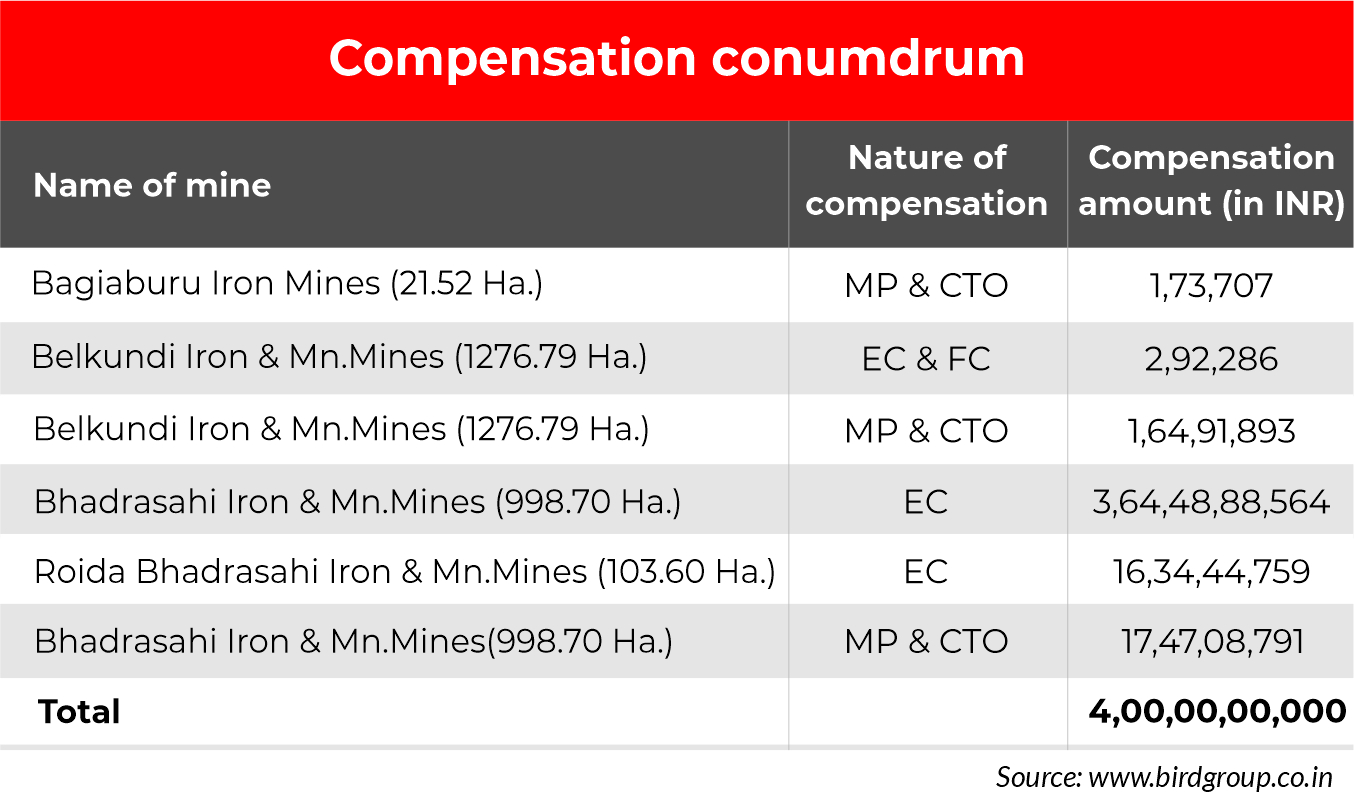 In the wake of BPMEL’s liquidation, the state government sought to re-possess these mines. The court, however, directed that since OMDC had been mining at these sites, it should be allowed to retain their possession now. The Odisha government has been effectively restrained from leasing the three sites to other miners, paving the way for OMDC to restart production. The liquidator also directed OMDC “to make payment of outstanding dues, if any, which were receivable by BPMEL”. The lease rights of all the six mines have expired and the six mines are inoperative for want of statutory clearances.

The applicant here was OMDC. It had filed many applications in the court. Since all of them pertained to the same issue, the court sought to dispose of them via a common order. The applications are about a specific mining lease in favour of the company.

The applicants were late in making payment as per an order of the court pronounced on August 2, 2017. This order directed the applicants to pay compensation to the state on or before December 31, 2017. But the applicant failed to meet the deadline.

This current application sought condonation of that delay in payment. One of the applications also sought a direction to the state to conduct a joint verification. This was to be of the undisputed stock so that the sale of the same could be allowed. The applicants asked for permission to resume mining operation, given the payment was made.

The Supreme Court, in its judgment dated August 2, 2017, had directed that compensation under Section 21 (5) of the MMDR Act should be paid by December 31, 2017. Subsequently, the Odisha government issued demand notices for production of minerals without lawful authority namely without/in excess of the environmental clearance and the amount before the deadline. According to notice No. 2567, demand notice for payment of INR 377.75 crore was sent on December 13, 2017 and in response, OMDC paid INR 10.56 crore on December 29, 2017. 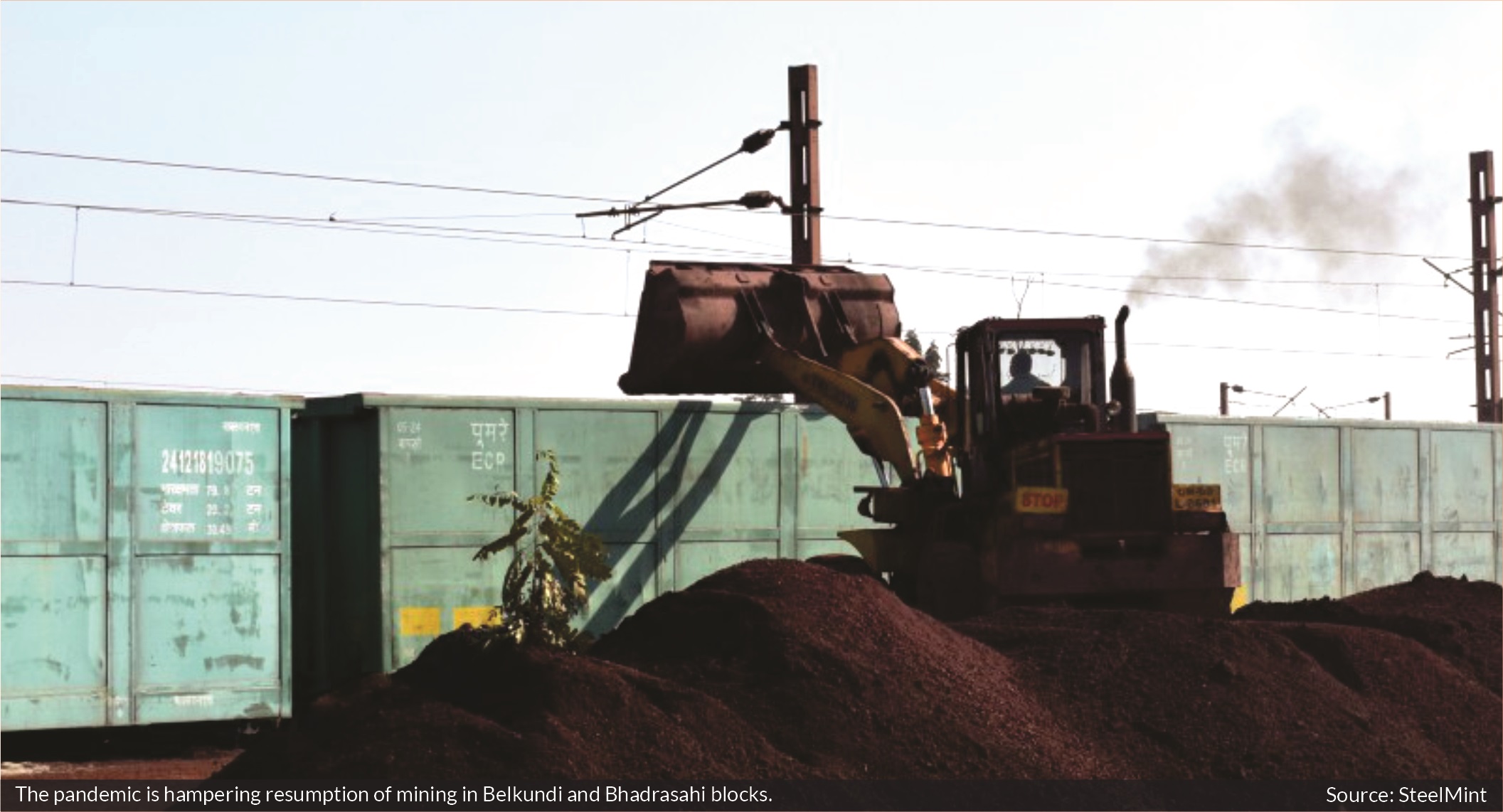 OMDC, in addition to the compensation, was supposed to deliver, after proper stacking, a stock of 327,866 MT of iron ore assessed as undisposed by February 28, 2018 together with interest calculated at 14%.

In June 2019, Keonjhar Collector Ashish Thakarey passed an order to seize the movable and immovable properties of six mining leaseholders who had failed to deposit the fines for violating mining norms.

The Collector asked the tehsildar-cum-executive magistrate concerned to seize the properties of the defaulting mining leaseholders within one month. OMDC, a GoI undertaking, paid only INR 511.79 crore out of a total penalty of INR 675.70 crore for which it was ordered to pay the balance in the next 45 days. OMDC was sent notice to reappear on July 12, 2019.

After Dharmendra Pradhan took charge as the Union Steel Minister, a group comprising Mohan Majhi, Sadar MLA (BJP); Ananta Nayak, former MP, Keonjhar; Dilip Mishra, former Chairman, Barbil Municipality; Radhakanta Mahanta, President, BJP; and Chandragupta Prasad, Secretary, MATOA, Barbil, had met him and apprised him of the situation as to how people were being impacted due to the closure of these profitable mines.

In February 2020, the Odisha state government extended the mining leases of OMDC for 20 years, subject to fulfillment of conditions.

The state replied to the applications stating that the compensation had been paid by the applicants. This payment was made under Section 21(5) of the MMDR Act of 1957. The interest amount had also been paid.

The court opined that it found it “expedient” to condone the delay keeping in mind that the compensation with the interest amount has been paid. The court took note of the submissions made by the Solicitor General. Based on these, the court remarked that the state has acknowledged the receipt of the payment.