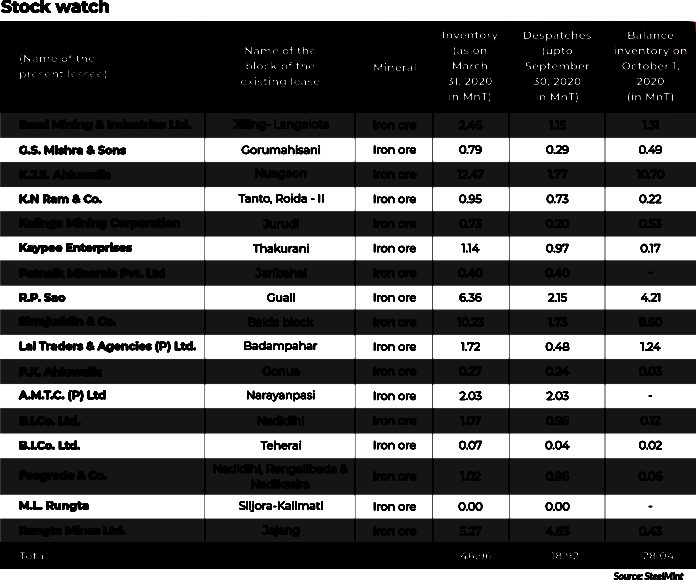 The Odisha government has given a month’s relief to ex-lessees of iron ore mines that were auctioned in February 2020 to evacuate stocks as well as mining equipment from the mine sites till October 31, 2020.

It may be recalled that the former lessees had time till September 30 to dispose of the stocks after the mines expired in March, 2020.

After accessing official despatch data issued by the Directorate of Mines, Odisha government, and subsequent to interaction with high-ranking officials, Steel360 has come to learn that the Odisha government, under the Mineral Concessions (MC) Rules, 2016, Rule 12 (1) (hh), has issued the notification for granting a months’ extra time, as per legal provisions, to the ex-lessees to clear out the ore stocks.

Rule 12 (1) (hh) of MC Rules, 2016 reads: “If at the end of six calendar months after the expiry or sooner termination of the lease term there shall remain in or upon the leased land, any ore or mineral, engines, machinery, plant, buildings structures, tramways, railways and other work, erections and conveniences or other property which are not required by the lessee in connection with operations in any other lands held by it under prospecting licence or mining lease, the same shall, if not removed by the lessee within one calendar month of being notified to do so by the state government, be deemed to become the property of the state government and may be sold or disposed of in such manner as the state government shall deem.”

According to Steel360 estimates, 28.04 MnT of overall iron ore inventory is still with the ex-lessees of the iron ore mines in Odisha that were auctioned earlier this year.

The material had to be exhausted before September 30. Now, the Odisha government has stepped in to supply mine-specific inventory and evacuation figures, not to forget granting an additional month’s time for evacuation of the material that has come as a relief to the ex-lessees. 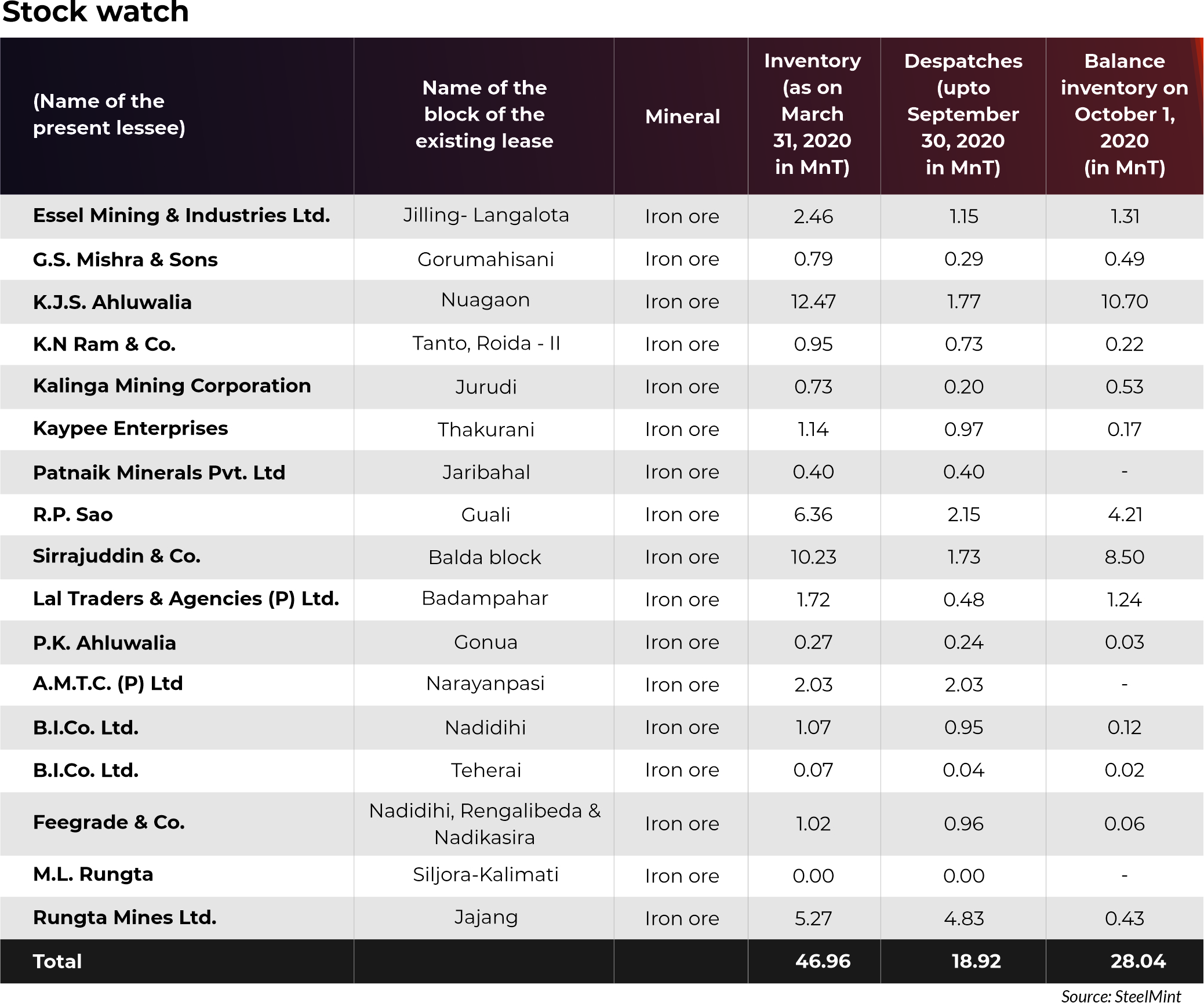 In fact, balance inventory as on October 1, 2020 with K.J.S. Ahluwalia’s former Nuagoan mine (now with JSW Steel) should be 10.7 MnT, while at Serajuddin’s Balda block (that the merchant producer retained at the recent auctions by quoting a record premium of 118.05%) inventory is pegged at 8.5 MnT.

In the Guali iron ore block that steel major JSPL bagged by outbidding R.P. Sao at the auctions, and where operations are yet to resume due to a land boundary and mine mapping dispute, inventory of 4.21 MnT is lying at the site, according to available data.

In effect, the ex-lessees now have time till October 31, 2020, to evacuate this stock.

“In case they are unable to dispose of this accumulated stock by October 31, the state government wouldn’t be able to extend the timeline further as no such clause exists in the MC Rules, 2016,” a senior official at the Directorate of Mines, Odisha, told Steel360.

“Of course, if the ex-lessees are unable to evacuate stocks by then only a legal intervention can allow them to continue asking for a prolongation in the timeline to dispose of the stocks,” he informed.

In view of the tardy disposal of accumulated stocks, it is unclear whether such a situation could arise in the near term. Despatches up to September 30 from the auctioned mines add up to just 18.92 MnT, especially at a time when supply tightness persists in Odisha.

‘Illegal’ pellets exports under scanner
Supreme Court advocate Manohar Lal Sharma, the first to file a petition before the country’s apex court in the infamous coal block allocation scandal, has filed a legal notice “in the public interest” against “illegal iron pellet exports” in contravention of the guidelines for exports laid down by the Union Ministry of Steel.

“The value of the illegal pellets export is about INR 40,000 crore,” the legal notice reads, adding that it falls foul of the S. 11 Clause of the Foreign Trade (Development And Regulation) Act, 1992 which mandates confiscation of goods and a penalty five times that of the value of the goods being sought to be exported.

The Ministry of Steel has authorised only KIOCL “as a canalising agency to manufacture and export iron ore pellets and by any other entity authorised by KIOCL”, the notice asserts, pointing out that only KIOCL is a 100% export-oriented unit (EOU).

“All pellet exports, other than by KIOCL and entities authorised by KIOCL, are illegal and liable to be prosecuted /penalised,” argues Sharma who was also in the limelight as the defendant of one of the accused in the infamous Nirbhaya gang-rape case.

Private exporters other than KIOCL “have been regularly exporting iron ore pellets illegally and several shipments are still waiting to be loaded at various ports in India which are liable to be confiscated,” the notice states.

It is pertinent to mention in this context that Steel360 has accessed a letter undersigned by a competent authority from the Department of Legal Affairs, Ministry of Law & Justice, dated September 10, 2020 which clarifies that with regard to a prior notification by the ministry dated September 26, 2014 the position of exports of iron ore pellets was that only pellets manufactured by KIOCL, under the export policy of State Trading Enterprises (STEs), could be shipped out of the country.

Subsequent to the notification, while the export item remained iron ore pellets manufactured by KIOCL, the export policy was changed from ‘STE’ to ‘free’, with the export restriction, however, being, “Export by KIOCL Ltd. Bangalore or any other entity authorised by KIOCL”.

The letter mentions that the necessary classification and amendment dated September 26, 2014 was the result of requests and recommendations by both the Ministry of Steel and the Ministry of Commerce. The word “free” substituted for STE, it clarifies, “only means any entity authorised by Kudremukh Iron Ore Ltd, Bangalore”.

“Therefore, exports of iron ore pellets by any other company except KIOCL or any other entity authorised by KIOCL is (sic) not in consonance with the notification,” the letter states.

The DGFT amendment in 2014, as accessed by this magazine, mentions only KIOCL as the exporting company, including other companies/entities authorised by the 100% export-oriented unit. So it doesn’t mention the legality or otherwise of exports carried out by any other company except KIOCL.

India’s installed capacity of iron ore pellets is about 90 MnT and production is 65-70 MnT out of which 12.5 MnT gets exported on a yearly basis. Exports in CY20 have spiked mainly on account of strong Chinese demand.