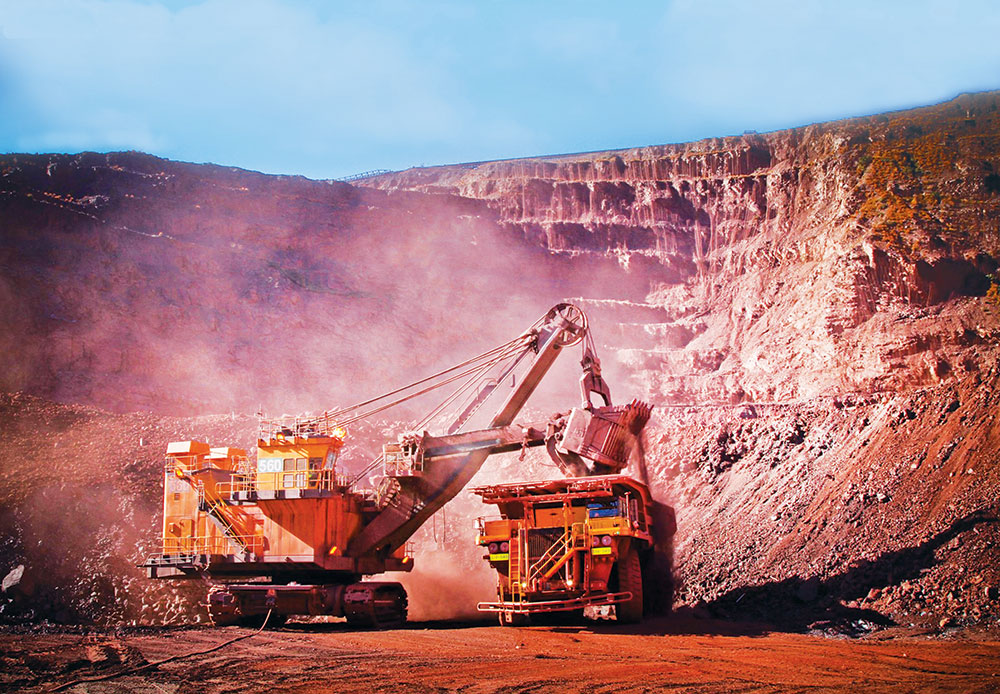 Global iron ore supplies paint a bleak picture. Four companies dominate global iron ore production – Brazil’s Vale, Australian giant Rio Tinto, BHP Billiton and Fortescue Metal Group (FMG). The seaborne iron ore supply was surplus in 2015, at around 1,400 mnt, and while the big miners have moderated their output guidance for the year, the oversupply situation is only expected to worsen in 2016.

Australia and Brazil, countries housing the world’s major miners, are pushing their expansion plans. With BHP Billiton, Rio and FMG dominating the big table, and Vale continuing to be aggressive with its production levels, supply from these countries has been on a restless upward curve. The two nations have captured more than 80% of the seaborne market. Australia increased its iron ore exports to China 10.8% last year while Brazilian cargoes increased just over 12%. Between them, Australia and Brazil could take over around 90% of the seaborne market as soon as next year.

China, the world’s largest consumer of iron ore would continue to be the driver for iron ore market. Since, iron ore is the key raw material for steelmaking, Chinese steel production is the most significant factor for global demand for iron ore. China also accounts for purchase of nearly two-third of the world’s seaborne iron ore supply, driving the business of global iron ore giants like Rio Tinto and Vale. China is a significant participant consuming around 70% of the annual seaborne iron ore to feed its steel industry. However, due to slowing Chinese economy, domestic demand for steel in the country declined by 0.5% in 2015, following on from a 3.3% decline in 2014. Despite the weakness in Chinese steel demand, the world’s iron ore majors invested heavily in boosting production capacity over the past few years resulting in an oversupply situation which has kept prices low. But, currently with seasonal pick up in steel demand, Chinese steelmakers have become increasingly dependent on imports as domestic miners, struggling with high costs and low grades, are being expelled from the market.

There is no doubt, iron ore production will be strong this year. The 4 biggies namely Vale, Rio Tinto, BHP Billiton and FMG are all on track to produce more and more iron ore at low cost to secure their market share amid a slowdown in China’s economy, the world’s largest iron ore consumer. Combined exports from miners namely Rio Tinto Group from Australia, Brazilian’s Vale, totaled an estimated exports of 270 mnt in the first quarter of 2016. It is an increment of around 10% from the same period last year.

World’s largest iron ore producer, Brazil’s Vale, expects to produce around 345 mnt iron ore in 2016. In 2015, Vale renewed its own record and supplied 345.9 mnt of iron ore to the world, out of which 129.6 mnt is from Carajas complex. Vale’s total iron ore supplies to China have been more than 180 mnt. Besides this, on 18 Mar’16, the miner and China’s China Ocean Shipping Company (COSCO) signed a long term shipping agreement to carry about 16 mnt of iron ore per year over the next 27 years. This would increase iron ore supply from Vale to China in the coming years.

World’s 2nd largest iron ore producer, Rio Tinto, still maintains its iron ore production guidance of 350 mnt in 2016. In its recent quarterly operational report of March ending, shipments on 100% basis (quality parameter) was registered at 80.8 mnt in Q1 2016. However, production from its Pilbara operations is estimated lower at 330- 340 mnt in 2017, compared with 350 mnt previously, due to delays in the hauling system. But, if the weather conditions remain favorable, the miner might as well maintain its previous target.

BHP Billiton recently released its operational guidance for first three quarters of FY16 (1 July’15 to 30 June’16) and produced 171 mnt, which is broadly in line with last year’s production, but lower than the run rate of BHP’s previous fiscal 2016 guidance. Its new guidance for fiscal 2016 is 229 mnt, which is 3% below the previous guidance. Production was less as Samarco’s iron ore production fell rastically by 50% due to the suspension of operations at Samarco following a dam failure on November 5, 2015.

However, once Samarco begins its operation on a full wing, the company could further deliver iron ore up to 290 mnt pa in the coming time.

In its recent quarterly results, strong shipments are shown and currently they are running ahead of target due to non-seasonal mild weather experienced during the March quarter.

Australia’s Roy Hill is one of the world’s major resource based projects. With an integrated mine, rail and port facilities, which has the capacity to deliver 55 mnt pa. All the shipments from Roy Hill are to be exported by world’s largest bulk Australian export terminal – Port Hedland. Roy Hill, the most talked about Australian project, is under operations now. Recently, on 31 Mar’16, Roy Hill announced its inaugural shipment of iron ore to Shougang’s mill to China.The Shougang Group is one of the leading steel manufacturers in China.

Vale’s S11D could be a Game Changer

The biggest iron ore expansion project currently under progress is Vale’s S11D project, located in the Carajas mining complex, Brazil. The project will increase the mining and processing capacity of Vale’s Carajas complex by 90 mnt pa. Carajas is very rich in iron ore content and produces Fe 67% grade material. The project is expected to start late in 2016 and be completed by the end of 2017 or at the beginning of 2018. Vale’s iron ore sales to China would rise from 180 mnt to 250 mnt with this new project.

Rio Tinto and Sinosteel Corporation have signed their historic Channar Mining Joint Venture in Australia’s Pilbara region. The Channar JV between both the companies with a separate agreement for Rio Tinto to supply iron ore from Pilbara, will enable sales of up to 70 mnt of iron ore to Sinosteel Corporation over the next five years. This extension will see 30 million tonnes of iron ore supplied into the joint venture.

The Australian-Brazilian pact between world’s fourth largest iron ore producer and largest iron ore producer proposes the formation of one or more joint ventures for blending selected volumes of iron ore from both the companies. The new blended product will be developed to suit the long term needs of their customers as well as improve the efficiency of the supply chain to the steel industry. The pact also includes the minority acquisition of shares on market and/or investment in current and future mining assets.

The global iron ore trade is subject to seaborne supply and demand. Based on the supply additions from major miners and upcoming new projects, the total supply for the key raw material is estimated to increase by 14% during 2016-2018. While, the market has an upcoming supply deluge from low cost producers through their upcoming projects, demand for steel remains subdued all over the world.

Also, according to a paper published by the Organisation for Economic Co- operation and Development (OECD) in Apr’16, “Despite the currently high level of global excess steelmaking capacity and weak market conditions, capacity is projected to grow further in 2015 2017. Capacity in the OECD area is expected to remain roughly unchanged, with a few new projects being offset by capacity closures. Much of the world’s capacity growth is likely to occur in regions that are currently net importers of steel. As a result of numerous investment projects currently taking place around the world, global steelmaking capacity is projected to increase to 2.42 billion tonnes per year by 2017, with non OECD economies accounting for approximately 72.4% of the total capacity in 2017.” The world crude steel capacity is estimated by OECD to be 2,407 mnt in 2016 and 2,422 mnt in 2017.

While steel production capacity additions are cropping up across the globe and that could be the driving force for iron ore demand, the demand for steel isn’t translating too well. As is clear from the figure, while global steel demand in 2016 will remain negative 0.8%, 2017 will only see a growth of 0.4% in global steel demand. In contrast, iron ore supplies are soaring at significantly higher rates, all indicative of a worsening supply glut of the raw material.

China’s position with its steel production is ever unclear. While the country steps up efforts to slash massive capacity glut amid slowed demand and rise in anti dumping complaints, it is likely to witness more steel capacity expansion by the end of 2016. China’s top listed steelmaker Baosteel Ltd expects its total output to rise about 20% in 2016. The country has been shipping out surplus amount of steel products at unfairly low prices. Steel exports hit a record of 112.4 mnt in 2015 despite imposition of anti dumping and safeguard duties on imports of Chinese steel by many countries. With the steel capacity expansions, Chinese iron ore demand is likely to increase and reach 970 mnt by the end of 2016. And, this demand will be majorly fulfilled by importing seaborne iron ore.

Recently, China, the largest iron ore buyer increased its iron ore imports by 8% y-o-y increase in March’16 – sending iron ore prices on a rally, pushing offers to 40% higher than in 2015. China’s iron ore import surge is speculated to rest upon its increasing steel output. While the increasing steel output by Chinese mills is spurred by increase in Chinese steel prices in 2016, analysts are calling it a soon to subside seasonal upswing.

Taking a look at the major iron importers, viz China, India, Korea, Japan and EU, steel capacities are being forecasted to rise in China and India. While China’s plans for increasing Vs decreasing steel capacities are dubious, iron ore exports to China may see a rise, it will be insufficient to contain the iron ore supply increments. Also, demand for the ore is positive from developing countries such as India where thrust upon infrastructure is escalating. However, India is sufficiently abundant in iron ore to fulfill its domestic needs and so are other emerging economies. Take for instance Iran, which has already begun rerouting its low grade ore to India for beneficiation.

Analysts speculate that the rally in iron ore prices will soon subside and the glut would lead to iron ore falling to USD 35/mt by the end of 2016. Even so, imported iron ore will be unable to infiltrate markets such as India where the cost of production is as low as USD 18/mt. The supply glut will persist even as the major miners lower their guidance looking at the unmatched demand, ultimately forcing smaller miners with higher production costs to shut shops.