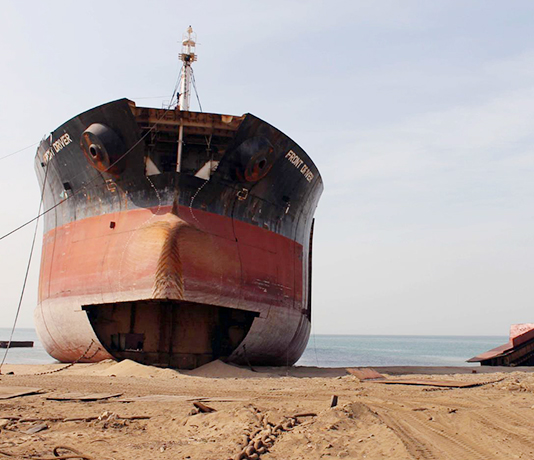 In 2009, the International Maritime Organization (IMO) adopted the Hong Kong international convention for the safe and environmentally sound recycling of ships. The Convention is open for accession by any state and is intended to improve the way ships are recycled globally. However, almost 9 years later, the Hong Kong Convention (HKC) hasn’t still come into force. In fact, it has been ratified by only a handful of countries, which includes Belgium, Congo, France, Norway, Denmark and Panama. Generally, such a slow speed of ratification would mean the status quo of the industry. However, this is not the case as a few stakeholders in the industry have voluntarily started to follow the procedures laid down in the HKC.

With respect to the HKC, the major stakeholders include ship owners, ship recycling yards and classification societies. There is several ship recycling yards in India, China, Turkey and Bangladesh that have developed their infrastructure and procedures and have been certified by IACS member class societies with the statements of compliance for operating within the framework of the HKC. Some ship owners have also voluntarily started to avail the recycling services of such HKC-certified yards. However, the demand is not originating equally from all ship types as tankers are lagging by a long way as compared to dry bulk and container ships.

The conditions set by IMO for the HKC to come into force imply that the flag states and the recycling states are equally important. With Panama (world’s largest flag stage in terms of registered tonnage) acceding to the convention last year, the condition related to the flag states, i.e., the combined registered gross tonnage of the States must be at least 40 percent of the total world registered tonnage is well on course to be met. The condition related to the recycling states, i.e., the combined maximum annual recycling capacity of the States in the preceding 10 years must be at least 3 percent of their combined registered tonnage, is far from being fulfilled. However, steps taken by Turkey and India to form national legislation in line with the HKC are crucial for the convention’s enforcement.

India being one of the countries having a very large recycling capacity is critical for the prospects of the HKC coming into force. Recently, the government of India formulated a draft bill based on the HKC with intentions of getting the bill passed as law from the parliament. The consultations on the draft bill with the stakeholders have been underway since Dec 2017. While this is an important development with respect to the HKC, yards in India voluntarily upgrading their facilities and getting Statements of Compliance (SOC) with HKC is another major development in the country. With around 50% of the yards operating under SOCs awarded by reputed classification societies, India’s ship recycling industry has made immense improvements. Such improvements should end all unnecessary criticism of the beaching method used predominantly in South Asia because the HKC certification of beaching yards means that safe and environmentally sound ship recycling is independent of the method of docking ships for recycling.

Contrary to the significant enhancements seen in the ship recycling industry in India, the end of 2017 brought two reports of fire incidents on two different plots of the Alang-Sosiya ship recycling yards. Unfortunately, one fatal incident was also reported in one of the two cases. Notably, both incidents were recorded at yards which are not HKC-compliant. Before these incidents, Indian yards successfully maintained a reasonably good HSE track record for a long time (as compared to yards in neighboring countries). This track record in India can be attributed to the efforts taken by the Gujarat Maritime Board in implementing the Ship Breaking Code in 2013 which streamlined the procedures of the entire ship recycling industry in Alang, India. However, such incidents should not be brushed aside indifferently; instead, they should unite all the stakeholders of the industry to work towards an accident-free industry not only in India but also globally.

Global and national rules and regulations are as good as they are implemented, and an effective implementation depends more on creating a culture in the industry rather than forcing changes upon the entire sector. The ship recycling industry in India has voluntarily started making positive changes. No doubt that a solid safety culture needs to be developed within the entire sector. The responsibility for this lies with the direct stakeholders such as government bodies, classification societies, ship recyclers, ship owners and intermediaries between the two. The work force needs not only to be trained regularly but also to have strict compliance of safe-working practices followed by workers. The importance of house-keeping, record-keeping, training and effective constant supervision needs to be underlined.

In conclusion, the ship recycling industry in India has come a long way from reluctance to adopt the HKC guidelines, to have more than half of the operational yards obtaining SOC with the HKC by the end of 2017. This confirms the genuine interest shown by yard owners in making investments to upgrade the standards of their recycling facilities. In addition, the Alang-Sosiya yard modernization project costing 730 Crore INR funded mainly by Japan International Cooperation Agency (JICA) to provide impermeable flooring to the yards is also a positive step. These developments must be recognized and acknowledged by the global media and any negative publicity based upon the recent incidents to malign the progressive transformation of the ship recycling sector in India is unwarranted. The only way forward for the ship recycling industry in India is to keep marching towards a scenario where all yards have become HKC-compliant and any mishaps or unfortunate incidentsare strictly out of the question.