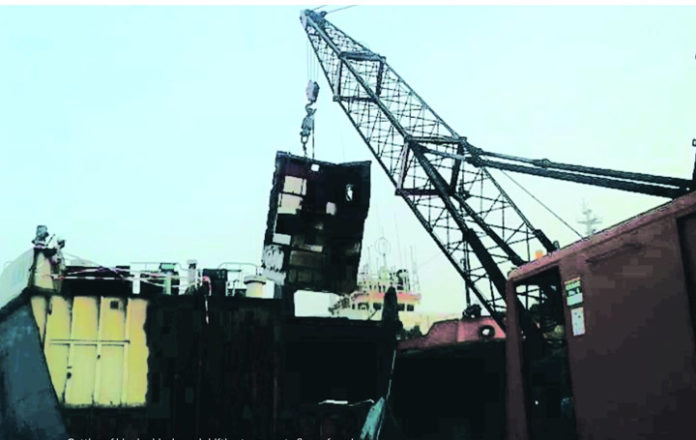 The picture of Bhavnagar which is in State of Gujarat on the west coast of India is a small place as the small 48 seater aircraft which landed the water surrounded land. But as we entered the town of Bhavnagar it gave a different picture with clean roads, few numbers of high rise buildings & lots of upcoming developments. The next day as per the schedule, we travelled 56 km to Alang from Bhavnagar, a ride which saw on the both sides of the roads – ranges of mountains, modern windmills, farms, mango orchards, plantations; as we zoom past trucks, buses, cars and almost crossed 4 villages on the way to the global capital of the ship recycling industry. Alang at present has 120 active recycling yards dismantling end-of-life ships to extract various types of scraps and equipment for recycling and reusing. Ship contains more than 95% of steel and the scrap value usually depends on the price of steel in the market. In India, ship recycling activity contributes to approximately 1 to 2% domestic steel demand that is approximately 28% of country’s total imported ferrous scrap. 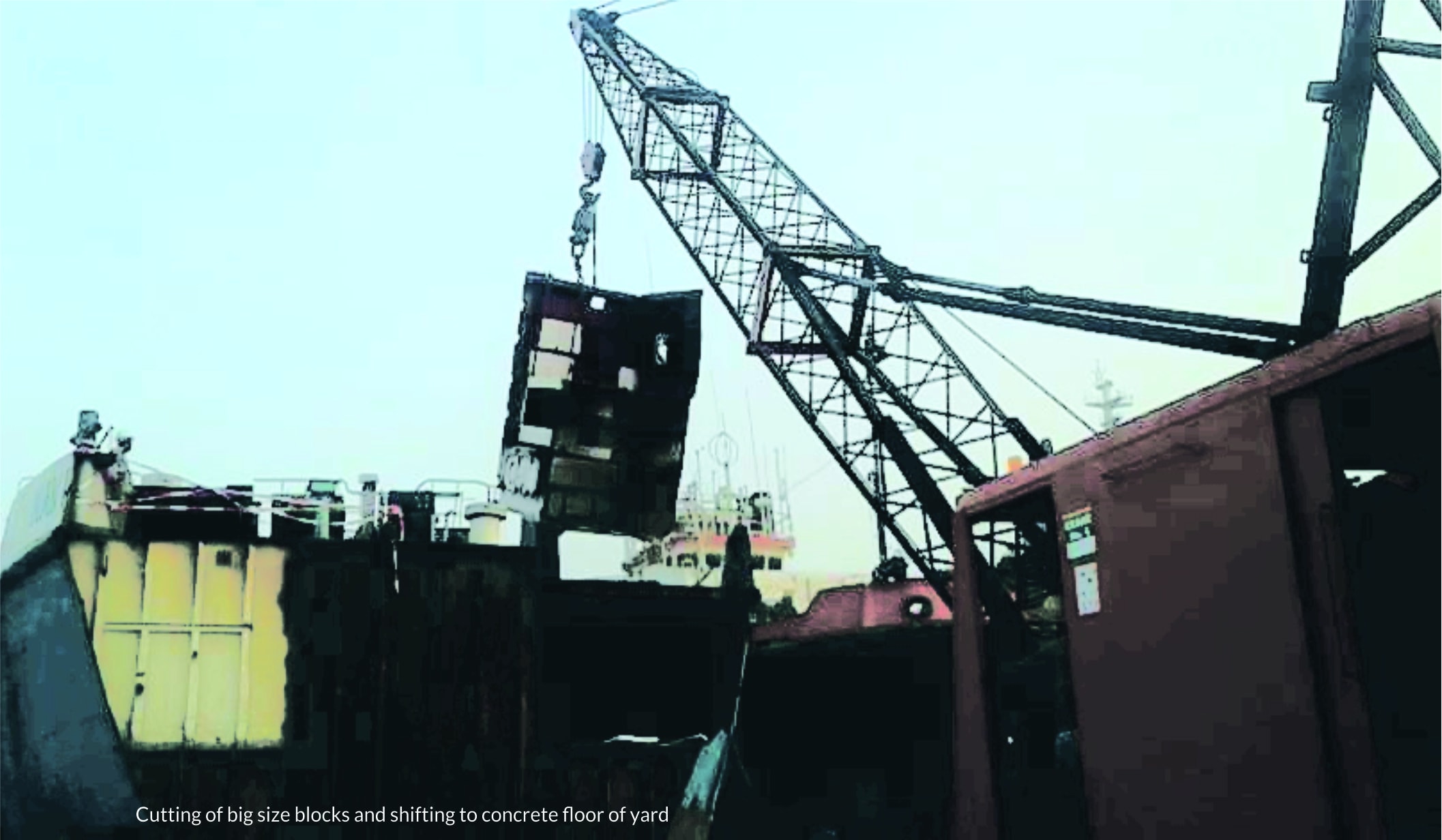 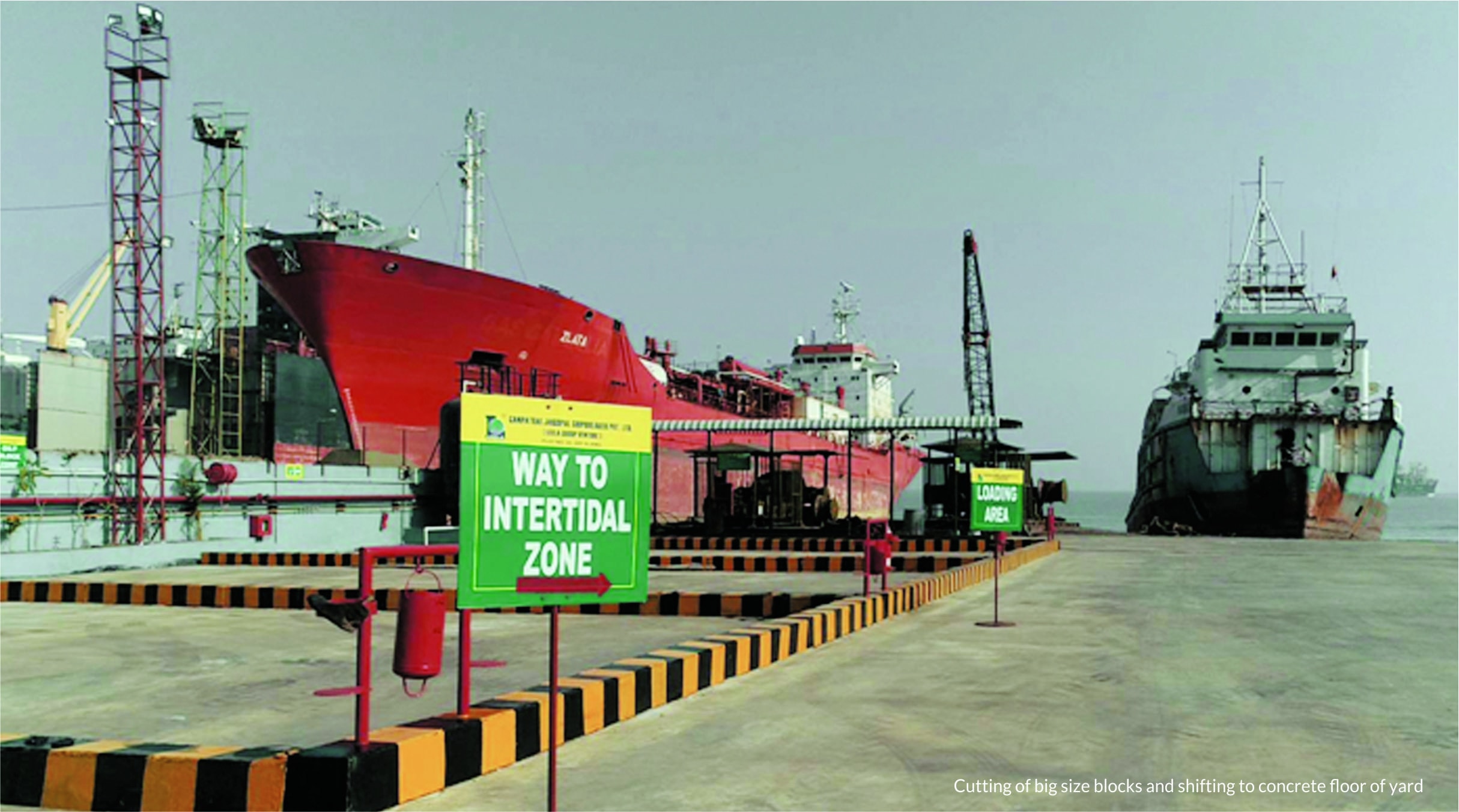 The natural energy of tidal motion combined with some unique geographical and coastal conditions at
Alang has helped to achieve the objective of dismantling obsolete vessels for the past three decades.

The 3 days visit by Steel360 to Alang led to explore the ship recycling yards, green ship recycling,
infrastructure growth in the past 5years of the yards, number of certified yards, talked to leaders in ship
recycling who has been holding the flag of success and also to analyse the domestic demand of the second hand shops from the streets of Alang. Also how Alang has become the most preferred destination for ship recycling in the past few years.

The near midday sun directed to the entry in to Alang-Sosiya Shipping yard welcoming us. The road
burst suddenly with activities on the both sides where we found all the things inside ship, tanker after its
dismantling ends with these shops like crockery’s, furniture – a-z of the ships are seen with these shops.

According to Dr. Anand Hiremath, “Lead Coordinator, Responsible Ship Recycling” with GMS
“More than120 yards are actively engaged in ship recycling providing direct employment to approximately 25,000 -30, 000 people in these yards. It is estimated that more than 800 second-hand sale shops are located in the Alang- Trapaj Road in the vicinity of the ship recycling yards. These shops are fed by the resalable materials recovered from these vessels”.

Steel that is obtained from the demolished ships is a major source of raw material for the re-rolling mills in India. These are converted into plates, bars and rods that are used in the construction sector. Approximately 90 % of the recovered steel in recycling operation is sent to the re-rolling mills where it is re-rolled and converted in to steel bars. The remaining 10 % which is referred to as scrap steel and are sent for melting in electric arc furnaces to be transformed into ingots.

The Reality Check of Alang Shipyard

The global economy relies on ships to transport cargo, people, and even weapons. Although the flow is never-ending, individual ships only last so long. When a cargo ship becomes too expensive to maintain and repair after about 20-30 years in service, shipping companies decommission it and have it scrapped for the valuable metals aboard and it is true for any type of ship, including cruise ships.

Ship Recycling is the only way for disposing of end-of-life (E-O-L) vessels. In last four decades, as per reports more than 7500E-O-L vessels have been recycled at Alang ship recycling yards. Alang have taken position as the world’s largest recycling destination for E-O-L vessels. 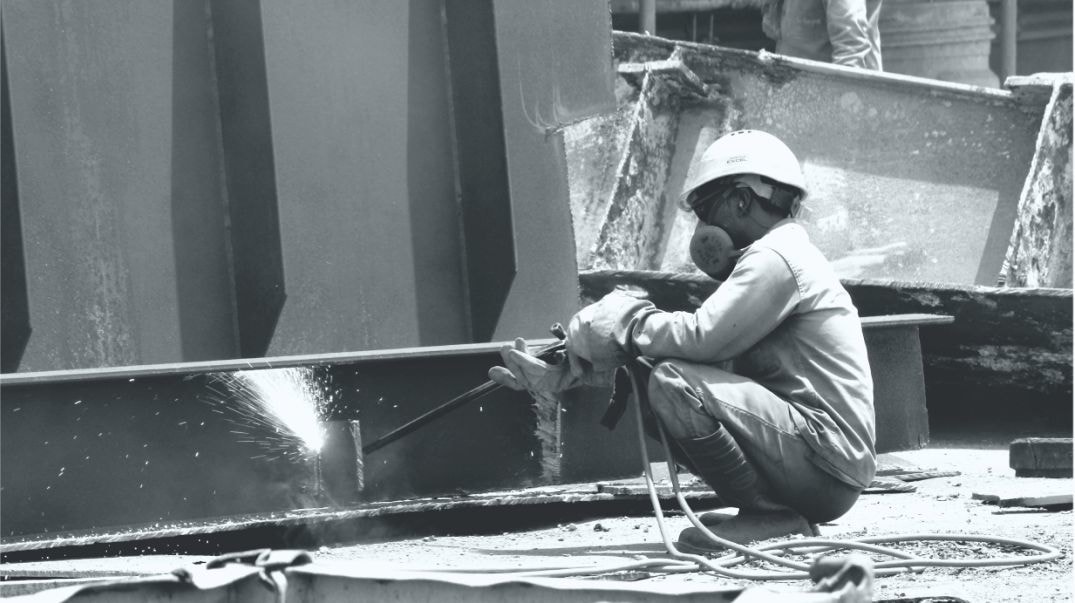 The South Asia ship recycling industry was characterized by below par health, safety and
environmental (HSE) standards few years back. But the shipping recycling industry in India has made its strides rapidly within the last few years as several yards are now upgraded to meet the standards set by the IMO, Hong Kong Convention (HKC). It is understood that about 61 yards in Alang amounting to more than half of the active yards, have obtained the statements of compliance (SoC) with HKC from IACS-member classification societies such as Class NK, RINA and IR Class. The awareness and
the necessity has brought the consciousness in the yard standards which can be attributed to the investments made by the yard owners to upgrade infrastructure levels. The role of other stakeholders such as local government bodies, ship owners and cash buyers in improving HSE and workers training standards must also be appreciated.

At present, almost half of the active yards in Alang, India hold valid SoCs with the HKC. These certifications have changed the standard operating practices of the certified recycling yards in India as such yards have improved their infrastructure facilities such as impervious flooring for secondary and tertiary cutting, cranes to lift heavy weight items, stormwater drainage and collection system, etc. In addition, safe-for-entry, safe-for-hot work, confined-entry, working at height and other similar procedures to ensure safe and environmentally sound recycling are also in place. 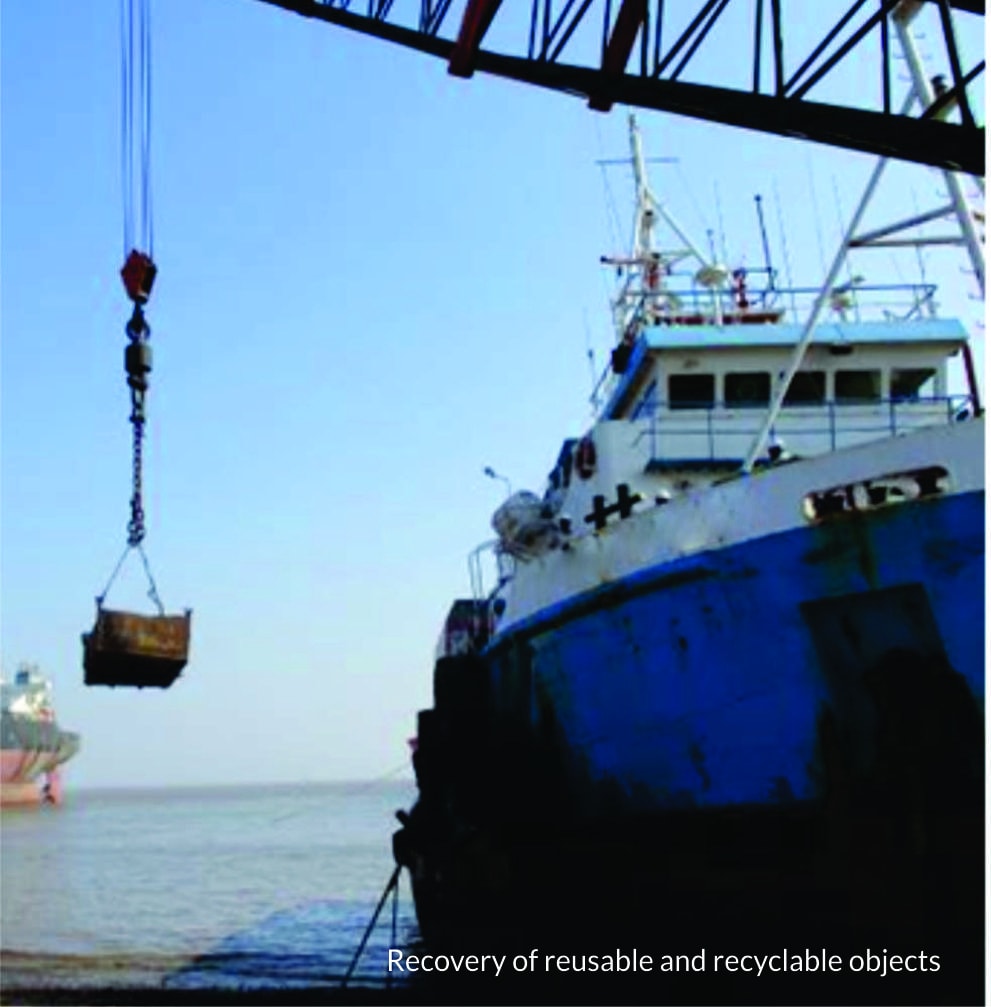 These improvements are further supported by the Alang- Sosiya yard modernization project costing INR 730 Crore (USD 109 million) funded mainly by Japan International Cooperation Agency (JICA). The infrastructure and procedural upgrades on the recycling yards in India have changed the face of the industry and ship owners have started to recognize these positive changes. Although these changes provide a clear platform to achieve safe and environmentally sound ship recycling, their effectiveness
depends largely on the skills of the workforce. The adequately trained workforce is of paramount importance to achieve incident and accident-free ship recycling process. For this purpose, the Training and Welfare Complex operated by the Gujarat Maritime Board (GMB) has been in operation in Alang since 2003. The complex is used to provide training and education to ship recycling yard workers on safety and environmentally sound operations.

The total number of workers trained so far is close to 120,000 since inception of the training complex. Recently, the Ministry of Shipping has started working in close association with GMB to ensure that Alang’s business environment and the working condition of the workers improve further. The Ministry under its flagship program Sagarmala has sanctioned INR 30 crore (USD 4.48 million) in 2016-17 out of which INR 10 crore (USD 1.49 million) has been released for skill development of the workers focused on occupational safety and health training. It is now mandatory for a worker to undergo a 12- day skills training program before he can begin work in any shipyard. Effectively anyone who works in Alang ship
recycling yards today undergoes the basic safety training. The program has trained 4,036 workers since February 2017.

The recycling yards all over the world whether it is south Asian countries, EU, Turkey or China has to
follow full compliance with international regulatory regimes even though every country has their own set of rules for ship breaking but the ship recycling industry follow the international regulatory compliance which leads to both environmentally safe & workers safety in the process of ship breaking.

What Is the Ship Recycling Convention?

The Hong Kong International Convention for the Safe and Environmentally Sound Recycling of Ships, 2009 (the Ship Recycling Convention or the Hong Kong Convention) was adopted in May 2009. After the entry into force of the Convention, the development and maintenance of an Inventory of Hazardous Materials, which identifies the amount and location of hazardous materials onboard a ship, will be required for all ships over 500GT. Furthermore, ships shall only be recycled at ship recycling facilities authorized by the competent authority. 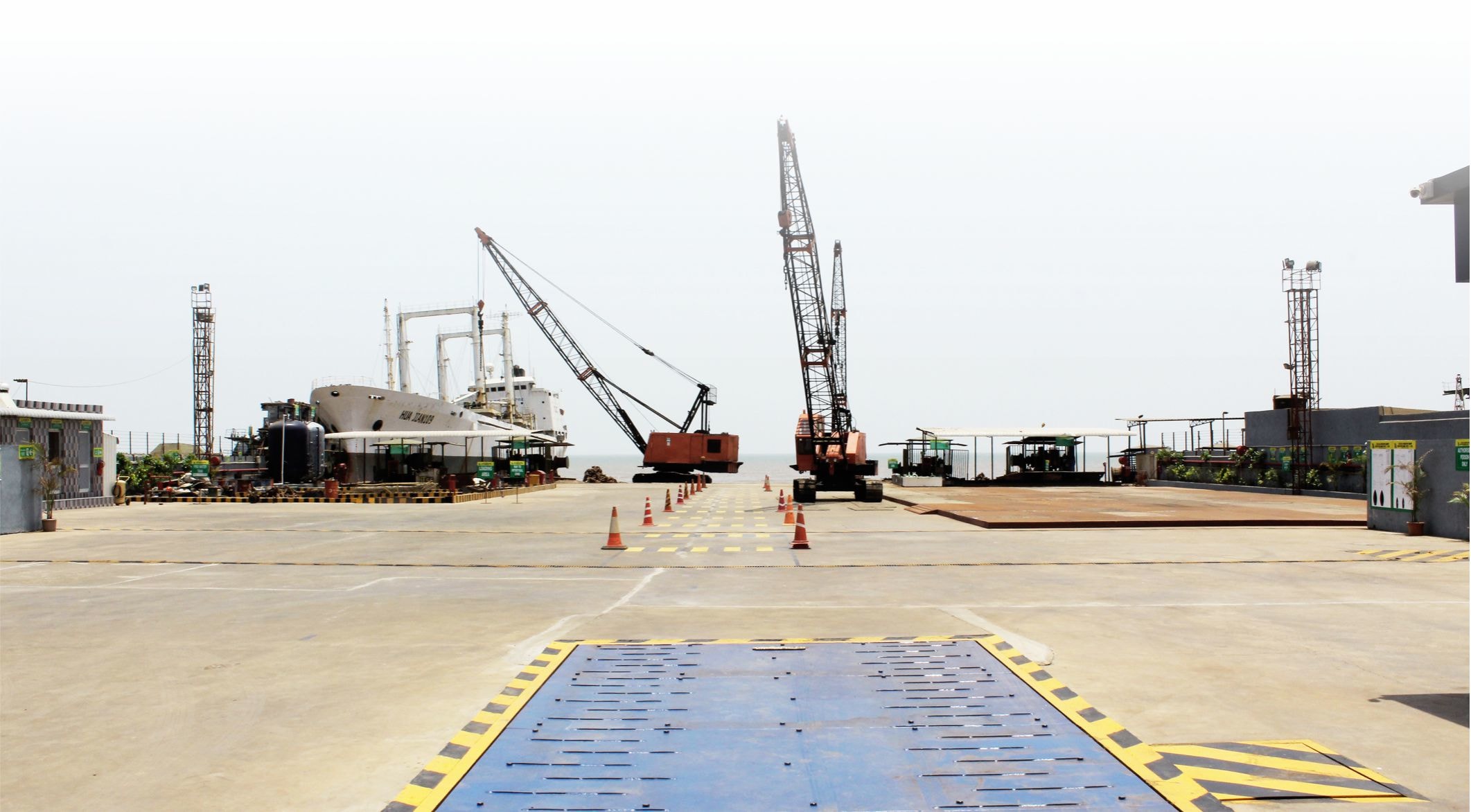 GMS comes in the picture being the world largest cash buyer of ships to green ship recycling.
According to Dr. Anand Hiremath cash buyers is an agent between the ship owners & the brokers and the ships are brought after different rounds of bidding. But GMS has taken another important role as
creating awareness for sustained green ship recycling, working closely with Shipowners & ship
yard owners.

Dr.Anand added that GMS looks for a sustainable way to achieve ultimate aim of zero accidents & a
near zero pollution to the environment. As most of the ship owners does not know what to do? & what
to do under responsible ship recycling program? GMS channelize & communicate to them like What
is their role? & what documents to follow once the system is in place from the ship owners, and further
GMS coordinate with yard owners”.

Under GMS CSR there is voluntary training program for the workers & safety officers from the yards & also assist yards in up gradation and help them in their certification.

IHM (Inventory of Hazardous Material) certification is the heart of green ship recycling as per Dr. Anand who is a certified Hazmat Expert or the owner should have IHM certification as per the MEPC 269 (68) guidelines of IMO.

According to Dr.Anil Sharma, Chairman of GMS “Back then ship recycling was just beginning to grow
in Alang. People started getting aware of a business opportunity. The industry was being shored up by
people who had little understanding about the field and even bakers and restaurant owners were getting into ship recycling to get a piece of the pie. However, since then Alang, in particular, has come a long way. Today those very people have grown into experts in ship recycling and have established facilities that stand as an example for recyclers around the globe. 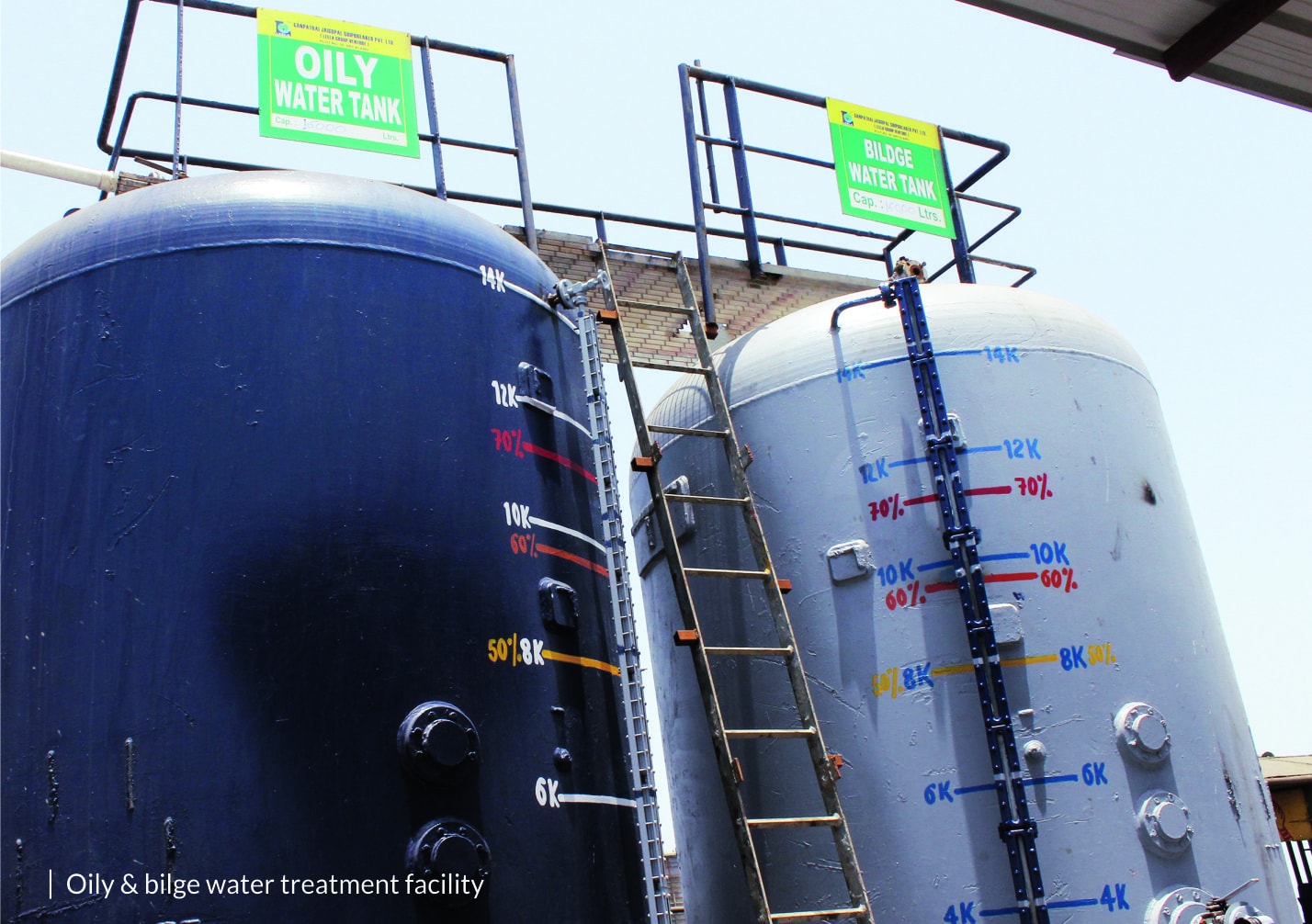