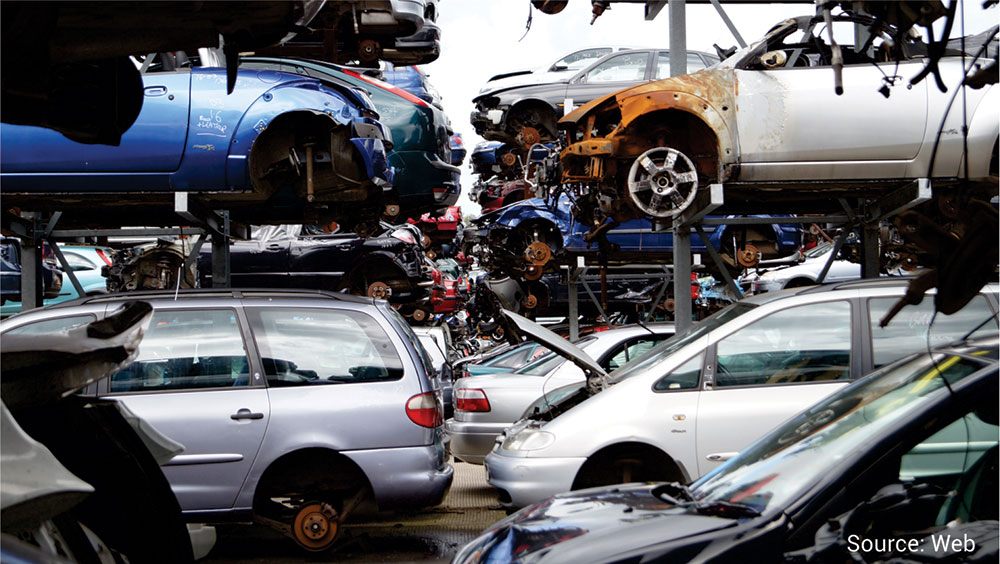 A decade ago, China witnessed boom in its steel industry and is now poised for growth in scrap production.

Corroborating this forecast is the fact that the Chinese government is putting in place scrap collection and sorting facilities. According to market experts, close to 200 million tonnes of scrap could be generated in China by 2020.

Looking at the global scenario, one can easily understand the importance of scrap in steelmaking. Major nations which use scrap as one of the main raw materials are Turkey, USA, EU and South Korea. During 2015, crude steel production in USA was about 79 mnt, wherein annual steel mill capacity utilization was about 72% with up to 56.5 mnt of scrap consumption. Likewise for the European Union, scrap contribution in 2015 was 55% in 166.1 mnt of crude steel production. Approximately 91.1 mnt of ferrous scrap was consumed by the European Union.

During 2015, China’s crude steel production was 803.8 mnt and scrap consumption was 83.3 mnt which is 10% of total steel being produced in China. In the present day trend where other developed nations are using scrap as a vital raw material, the majority of steel in China is produced by blast furnaces. The current proportion of scrap used in blast furnaces is just 8% while according to global standards the scrap usage in blast furnaces can be as high as 20%. This means scrap usage can increase in China without any need for building electric arc furnaces in near future.

Steel Products of Yesterday to be Raw Materials for Tomorrow

China is the largest producer and largest consumer of steel in the world. Apparently China consumed 6,620 mnt of steel from 2005 to 2010 and produced 6,876 mnt of crude steel during the period. A sudden growth in infrastructure development, automobiles and machinery was witnessed during the period that led to increase in production and demand.

With so much steel being consumed by the nation during the last decade, it is now forecasted that China might expect an increase in scrap generation, mainly because vehicles, machinery and home appliances will reach the end of their lives. Government’s environment safety policy is also among one of the major factors for scrap generation. Just as in 2014, the Chinese government has planned to scrap vehicles that don’t meet emission standards, contributing to the nation’s scrap generation.

The number of cars registered in China increased drastically by 20 times between 2000 and 2010. With over 78 million vehicles, China became the second largest fleet in the world during 2010. The average life of automobiles varies from 10 to 15 years and with the sudden increase in car production since 2005, it is believed that 2016 will be the year that cars become available to be scrapped. It is believed that over the next three years, 6.2 million, 7.6 million, 8.15 million cars will be scrapped each year. In 2019 it is expected that the numbers will reach 12 million.

It is expected that due to environmental reasons and safety measures, government of China might take a strict stand on old machinery to be taken out from the industries. Old machinery generates less output and their safety measures are also outdated. Abolition of old buildings generates a sizable amount of scrap and with the development of infrastructure in China it is believed that a lot of scrap will be available in the coming years.