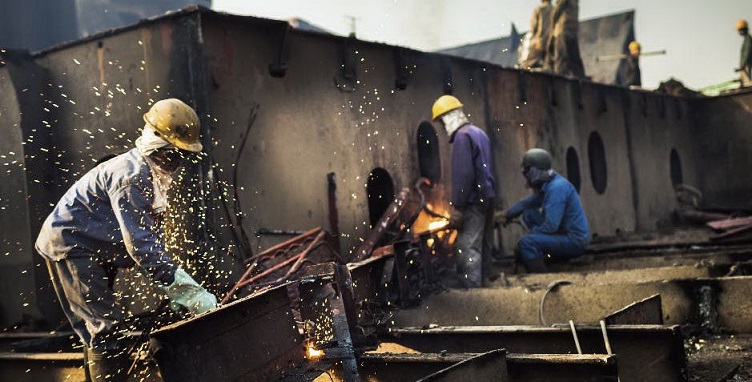 Market sentiment in the ship recycling industry has began to improve gradually after what has been a quarter of immensely sluggish movement in the industry, for the most part due to a 15 per cent tax imposed by the Bangladesh government on purchase of ships and to some extent because of apprehensions about Pakistan’s annual budget.
The industry had remained in a state of oblivion for several weeks as recyclers in two of the largest markets, Bangladesh and Pakistan, had been holding back orders thus driving prices down. Bangladesh government’s move to withhold the new tax for 2 years has acted as a major impetus in bringing about the change in sentiment and improvement of prices in the last two weeks.
According to Faidon Panayiotopoulos, Sr.Trader with GMS & expert in the field based in Dubai, it is due to the uncertainty following the announcement of the 15% VAT, Bangladesh remained silent with minimal local sale, till late June, when the imposing of the additional tax was postponed. “In the meantime, the above would naturally create oversupply of offered tonnage in the other two subcontinent recycling destination, especially in tankers, where India was the only destination” He further added.
Panagiotopoulos believes that there were two factors though that prevented the prices from falling sharply. First being the reduced number of vessels coming for demolition (only in India there was an approximate 35% decrease in ldt recycled for the first half of 2017, in comparison with the same period in 2016). “Second reason being the impact of steel prices, which has been positive (Scrap steel in China gained almost USD20-25 throughout June), he stated. With Bangladesh back in the game, there has been an increase in price of up to 10% for the time being. Even though much of ship recycling work has been hit by monsoon rains the industry would gradually gain pace as rains recede.
GMS, the largest cash – buyer of ships for recycling, answering to Steel360 questions stated regarding the Bangladesh’s tax policy said “It is important to understand the linear correlation among the different market participants: ship owners, cash buyers, end buyers and steel mills. This means that an added tax on the import/purchase of a vessel by an end buyer (recycler) will lead to a price discount offered ultimately to the ship owner. Consequently, the competitiveness of the Bangladeshi market when it comes to price it will drop significantly. However, the Bangladeshi Ship breaking Association has managed to receive a 2-year delay in the imposing of the 15% tax by the Government of Bangladesh”.
While speaking about the present rate of taxes applicable GMS stated, “Revenue duty either 5% of Invoice Value or BDT 1500 (approx USD 18.51) / MT. Clear communication pending from National Board of Revenue for the same; which expected sometime next week. However, whichever option it is, duty roughly comes to similar amount. Therefore, it is not expected to make any significant difference into cost calculations. Overall, new budget impact is now neutralized with almost same duty structures as before.”
The situation in Pakistan is also due to improve believed GMS experts and stated, “What can be noticed here is that the tax imposed in ship recycling has been increased from 70.5% to 72.5% and also, sales tax has been increased from PKR 8000 to PKR 8500 per tonne. Overall PKR 650-700 (USD 6-7) per ton taxation has been imposed. However, the valuation of import rolling scrap has been increased and sales tax imposed, by PKR 2700 P/MT (USD 27-28).” It has been learnt that other taxes imposed on the rolling and melting sectors create a good advantage for the local ship breaking industry, which is the reason why the Pakistan market has shown somewhat better performance among the three recycling markets from the subcontinent.

Also Read : Ship Recycling: On the Rise from Deep Waters

Although the short term prospects for the industry seem to be positive ambiguity still prevails in respect to the long term outlook. According to analysts, there had been a major upturn in ship buying after 2011 and therefore the chances for another wave of selling to occur is bleak in the medium to long term. In the last three years somewhere in between 950 to 1000 ships were being sold for recycling with many being sold even before reaching their ideal end of life.
Source:  Steel 360 Magazine Aug’17 Issue