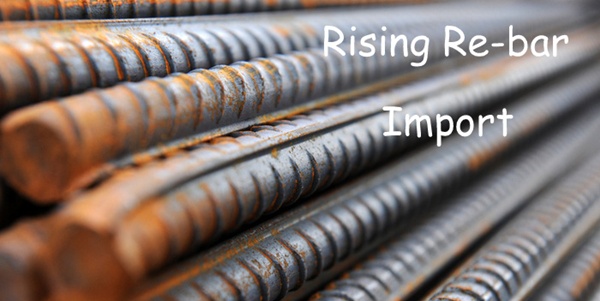 Steel Ministry has been continuously reviewing the scenario of rising rebars import, especially from China and possible measures can be taken like hike of import duty ranges from 5-7.5% at present.

Joint Secretary, Steel Ministry, Syedain Abbasi stated, “There had been 22-23% rise in import of steel products during Apr’14-Aug’14 against the corresponding period of last year. At present, we are continuously witnessing the overall scenario”.

“If the trend prolongs, we are likely to consider suggesting steps after a review by October,” Mr. Abbasi mentioned after a conference on steel that was organized by Bengal Chamber on 13 Sep, 2014.

Steel Ministry has already instructed the various concerned department like customs to check the standard and match the quality certification of import on a priority basis. In FY14, India’s rebars import touched 5 MnT and if import rises, it is expected that the import will cross 6 MnT in the current fiscal.

Mr. Abbasi also urged that compared with other manufacturing sectors, steel import of upto 5% domestic production at the current import duty level cannot be termed bad. However, more import is definitely not desirable.

According to SteelMint data, Bar & Rod have crossed 50,000 MT into India from April to August, 2014 and out of the total quantity about 60% was imported from China.