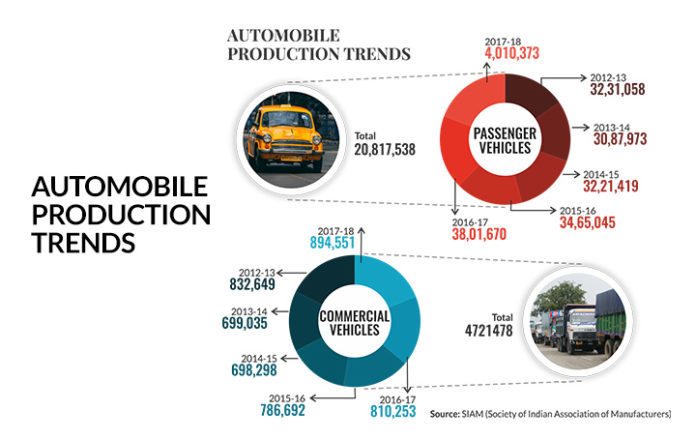 The Indian auto industry became the 4th largest in the world with sales increasing 9.5 per cent year-on-year to 4.02 million units (excluding two wheelers) in 2017 and it was the 7th largest manufacturer of commercial vehicles in 2017.

India is also a prominent auto exporter and has strong export growth expectations for the near future. Automobile exports grew 26.56 per cent during April-July 2018. It is expected to grow at a CAGR of 3.05 per cent during 2016-2026. In addition, several initiatives by the Government of India and the major automobile players in the Indian market are expected to make India a leader in the two-wheeler and four wheeler market in the world by 2020 (Ibef).

Even though a road map was made for the automobile industry in its second Automotive Mission Plan 2016-26 (AMP 2026) by SIAM and Government of India, where the various segments of the automotive industry and auto component industry need to be by 2026 in terms of size and contribution to the overall Indian economy, but the implementation of End of Life Policy for automotive vehicles and components is only expected by 2020.

Chairman of SIAM recycling Committee Captain Mohan Ram spoke to Steel360 about the association’s ongoing activities and on different recycling initiate being taken and also optimistic about the scrappage policy which will be implemented by 2020. 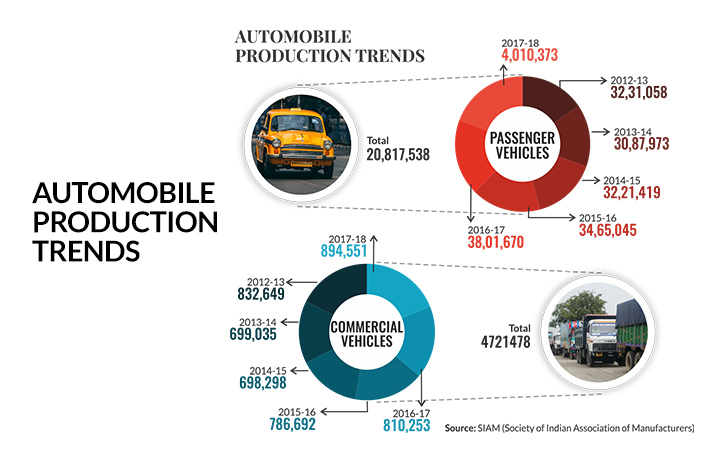 SIAM has been proactive in promoting environmentally tolerable, socially acceptable and economically feasible systems in India for recycling automobiles which have reached end of useful life.  It has constituted a full time ‘recycling group’ devoted to the topic.   I have had the honor of chairing it from inception. The group has participated in seminars and conferences on the topic the world over and visited recycling setups in different countries.

It has organized meets in India with experts drawn from abroad to sensitize the authorities and other stakeholders to the issue.  Thanks to its initiative, a recycling demonstration center has been set up at GARC, Oragadum, Chennai under the auspices of NATRiP under Ministry of Heavy Industries. The center was funded from the auto industry cess funds.

The auto OEMs donated seventy five vehicles (cars and two-wheelers) to kick-start the unit.  SIAM has assisted ARAI, Pune in formulation of rules for design and construction of vehicles, control of heavy metals and for operation of dismantling centers.  The standard AS 129, based on European standards, is awaiting promulgation.  The industry’s only role is to facilitate setting up good modern recycling units.  It cannot be expected to operate the units or subsidize them.  A well run and organized dismantling set up can be commercially viable.

Even without a formal scrappage policy the numbers of vehicle to be scrapped will increase exponentially.  The current informal industry is not capable of handling the volume. Broad guidelines have been issued by CPCB but they are unlikely to be effective without formal standards and implementation.   The automotive industry’s role is to design and build vehicles with high recyclability.  It cannot be expected to run or finance scrapping units. Government seems to be inclined to start the scrappage initiative commencing from Heavy Commercial vehicles.  As per press reports, no policy is likely to be in place before 2020.

What is trend of vehicle scrappage for commercial  vehicles (numbers & data) in the past 3 years that is from 2015 to 2017?

To my best knowledge, no centralized data is available on the scrappage of commercial vehicles. The activity is fragmented.  There is no formal data collection system to date. 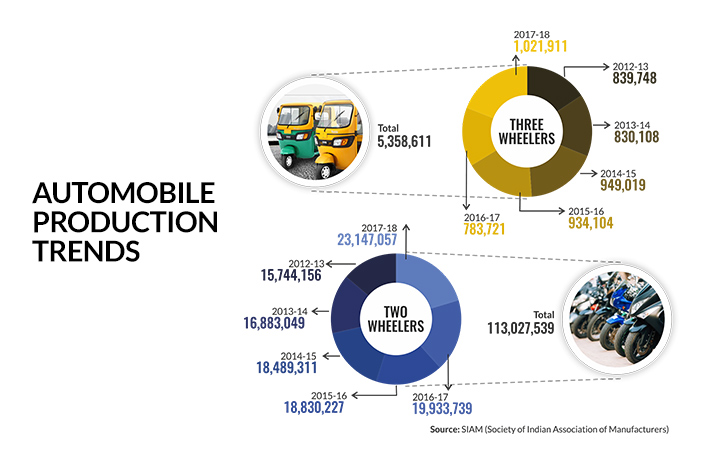 2018 began with an optimist note for the Indian automotive industry and a two months report of McKinsey & Company (Automotive & Assembly) showed a rosy picture of Indian automotive sector that India is expected to emerge as the world’s third-largest passenger-vehicle market by 2021. It took India around seven years to increase annual production to four million vehicles from three million. However, the next milestone—five million—is expected in less than five years. Hitting that mark will depend on today’s rapid economic development continuing, with a projected annual GDP growth rate of 7 percent through 2020, ongoing urbanization, a burgeoning consuming class, and supportive regulations and policies.

But the Oct month outlook was low even though it was festive season it was not of a festivity for car and SUV makers as the spike in fuel and insurance costs, as well as wealth destruction in the stock markets, have dampened buyer sentiment, which is now delaying, or even putting off new purchases, replacements and upgrades.

With inventory levels far above the average, companies have started throwing in massive discounts and other ‘festive’ offers to lure buyers and push sales.