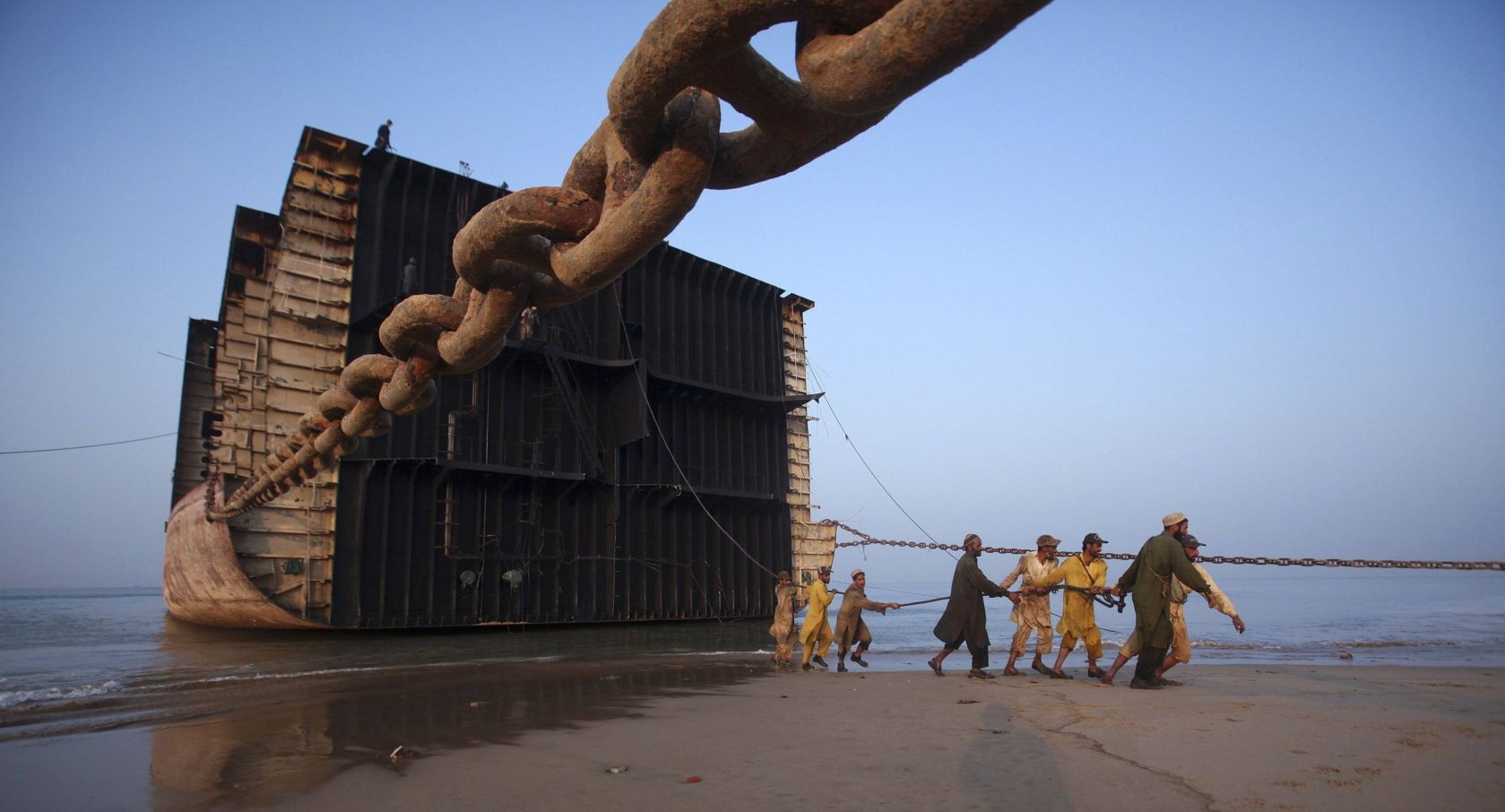 From the streets of little-known Bhavnagar in Gujarat to the helm of the ship recycling industry, the journey of GMS chief Dr Anil Sharma has been nothing short of an unbelievable tale of grit, acumen and as Dr Sharma magnanimously puts it, fortune. Dr Sharma, not long back, was working as a professor in Maryland, USA, before embarking up on a path that would eventually lead him to the position of a global business leader, within the course of two decades.

After having built a company which stands as the largest cash buyer of ships in the world, from ground up, Dr Sharma is reckoned as an authority in the field of ship recycling with more than 2 decades spent establishing what is now the widest trade network in the field. Dr Sharma’s dominance in the industry can be better gauged by the fact that it was he who coined the term ship-recycling. GMS presently has a 25 per cent market share and has its footprint in more than 12 countries. During its 25 year journey GMS has emerged as a pioneer in environment friendly recycling and was also the first cash buyer to develop its own Green Ship Recycling Programme. The company is acknowledged world over for its contribution towards development of infrastructure,human resource and knowhow in green recycling.

Hailing from the Western Indian state of Gujarat Dr.Sharma grew up in Bhavnagar, not far from the unofficial ship breaking capital of the world, Alangand thus was familiar with the business. However, his tryst with ship breaking did not begin from Gujarat, Dr Sharma rather would have to travel halfway around the world to finally encounter his true calling, while teaching in America. Capitalizing on one opportunity after another from the basement of his house in the US, Dr Sharma established an empire that now stretches from finance to owning its own fleet of ships.

While talking about his first step into the industry Dr Sharma shared, I had people in Gujarat asking to explore prospects to buy ships from the US for quite some time, they would tell me you are so close to Washington why don’t you start buying ships and I would reply that I simply dint have the money or knew anything about ships. In Dr Sharma’s narration he did start actually pondering about the possibilities and then finally found a company in United Kingdom which was willing to lend me the money. “I found out that the United States Maritime Administration was looking to sell a few obsolete naval ships and I immediately saw an opportunity” Dr Sharma exclaimed. He bought 6 out of 8 ships in the very first year of his business and subsequently became the largest buyer.

A year later Dr Sharma was invited to Russia to explore the possibilitiesof a similar deal to procure naval ships and it was the successful completion of this deal that cemented Dr Sharma’s place in the field. According to Dr Sharma he dealt with naval ships between 1992 and 1996. “I knew very little about the industry at that point in time while I was still working out of my home. I chose to sell only to Alang initially as my brother was there and had quite a few trade sources”, Dr Sharma added. “It was only after 1996 that I planned to resign from my job after I had established the business to some extent” Dr Sharma asserted.

It was after this that Dr Sharma started developing trade network in other major markets such as Bangladesh, Pakistan, China and Turkey. He established GMS in US, which stands as a global hub for trade and transport. Talking further about the company’s journey, Dr Sharma shared that after GMS was established in the industry as a cash buyer it was only natural to venture into other avenues to further propel growth. “We saw an opportunity after the 2008 banking crises as major banks had stopped lending to small and medium sized fleet owners leaving a major gap in the system” he shared. “We gradually started to provide assistance to these ship owners and companies as a collaboration and ventured into financing and along with it also owning ships” he said.

DR SHARMA IN A CASUAL TETE-A-TETE WITH STEEL360, TALKS US THROUGH HIS RENDEZVOUS WITH DESTINY AND SHARES INSIGHTS INTO THE SHIP RECYCLING INDUSTRY.

Back in early 90s how strong was the industry and demand?
Back then ship recycling was just beginning to grow in Alang. People started getting aware of a business opportunity. The industry was being shored up by people who had little understanding about the field and even bakers and restaurant owners were getting into ship recycling to get a piece of the pie. However since then Alang in particular has come a long way. Today those very people have grown into experts in ship recycling and have established facilities that stand as an example for recyclers around the globe. Today the recyclers in Alang comply with industry best practices and carry out their trade in accordance with the recycling plans that we prepare. Our Green team members visit these facilities on a regular basis and conduct audits and extend technical assistance for greener, safer and more profitable recycling.

How were Pakistan and Bangladesh poised back then?

In 1992 when I started out, I was a considerably small player in the market and rather chose to sell only to the recycling facilities inAlang. I did not have that many connections in other countries. Because when you are new in the market one tends to be more careful. However I was aware that ship recycling had been going on in both countries but I opted to diversify supply only after a certain point of time.

Where do you see GMS going from here forth?

We have endeavored into various different verticals including finance and ship ownership and plan to consolidate our position in the industry. I have said this time and again while speaking to the GMS team that our job is not to sit on the sidelines and we rather need to be the change. Our logo talks about leadership and we have these values ingrained in our ethos. We have a global perspective towards shipping and would want to influence positive change. India government’s acknowledgment of the Hong Kong convention is an example how industry leaders such as GMS can contribute towards developing a greener and progressive industry.

How is the overall outlook for the industry in medium term?

The outlook for the industry in the medium term looks flatish, atleast during 2018-19. Primary reason behind this is the aggressive scrapping of ships between 2011 to 2013.In fact 2012 was the biggest year in history for ship recycling and saw more than 1000 ships being scrapped. After the global financial crisis in 2008 the market began to resurge and a lot of ships were built. By 2012 due to high cost even container ships which are supposed to run for 30 years were being sold for recycling at just 8 years of age.

Most countries are imposing strict standards on quality of steel. How do you think this would impact ship recycling?

The scrap from ship breaking is not used for purposes which require superior grade of steel. The market that ship recycling feeds does not need advanced or high strength steel. In Bangladesh for example steel from ships is the primary source in absence of blast furnaces. What needs to be understood here is that sustainability is a key element and ship recycling provides the world green steel. Today yard owners in the United States are also pushing the government to promote green steel.

GMS recently invested in an Indian Super League team, what drove you to Indian football?

I have been away from India for many years now and I had wanted to give back to the country in some way or the other. India is a country of over a billion people yet the country’s performance in global sports such as football has been short of what the youth of India are capable of. I have played a lot of cricket back in the days and do have a soft corner for sports. My son, who is also an athlete, discussed about the investment proposal with me and even he was quite keen on investing in the growth of football in India, so Delhi Dynamos – representing the capital city of India in football – seemed like the obvious choice.

As an entrepreneur yourself what do you think is the key to success?

I strongly believe that the harder you work the luckier you get. There can be no shortcuts. Business leaders like Bill Gates and many others like him are not smart talking businessmen but have tasted success through grit and persistence and exhibit a great deal of integrity in their work. Initially when we started, the industry had a terrible reputation and I would almost be like an outcast in conferences. But over the years we turned things around exponentially and have created value not just for GMS but for the ship recycling industry as a whole. Dr Sharma about  own journey does modestly say that he was at the right place at the right time but also makes it clear that it has been persistence that finally paid off.