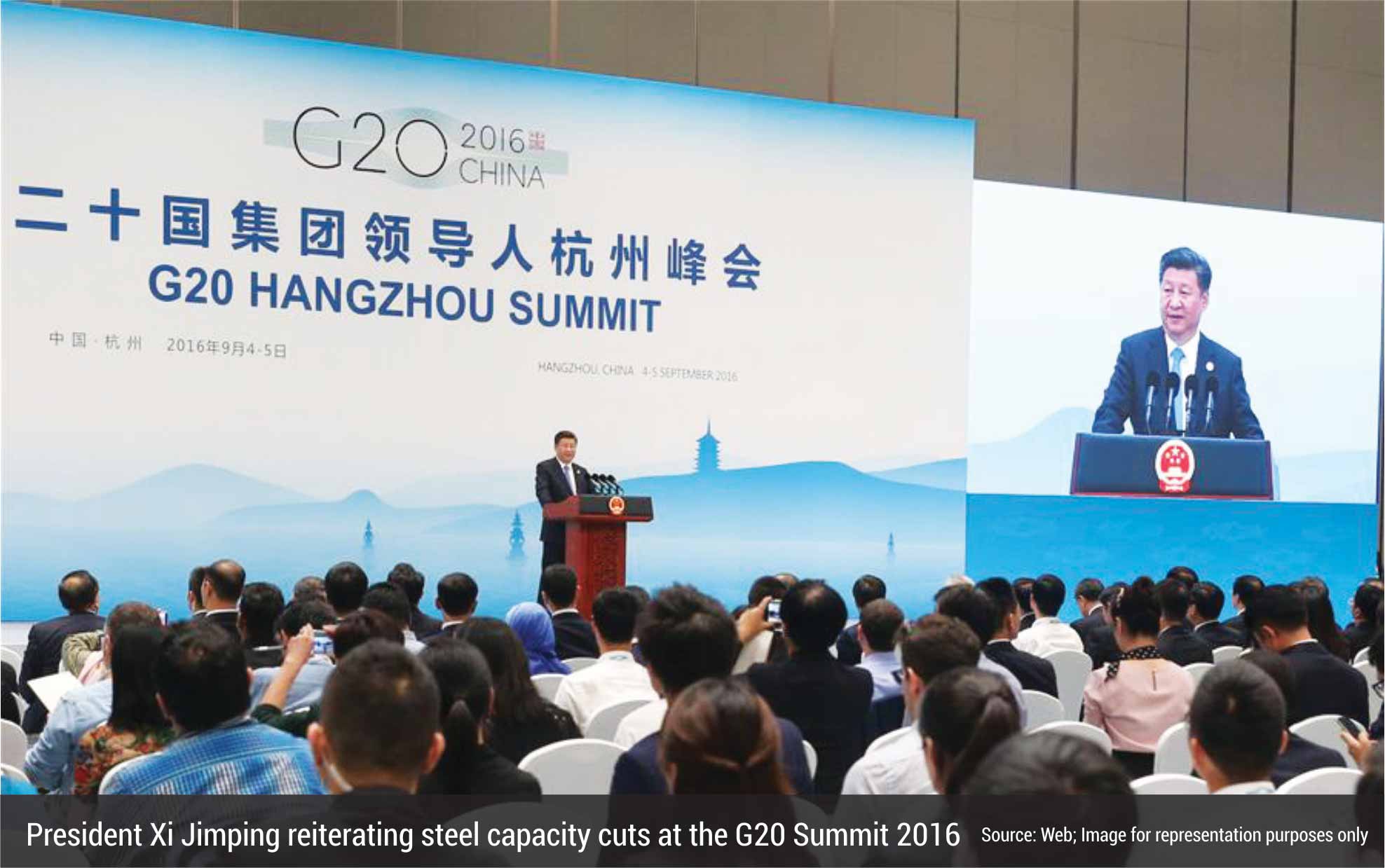 None other than China can better exemplify the harm in overdoing things. Having built a massive capacity of 1.2 billion tonnes of steel production, China is today at a loss for containing it for its own good. At 800 million tonnes (mnt) of steel production in 2015, about 400 mnt of capacity remained idle, this, if prices improve could make a comeback. China’s overcapacity is the answer to much of the chaos in today’s global steel market. While most steel & ancillary businesses globally are driven by China’s intake of raw materials and output of steel, the fact that the country is currently facing an economic meltdown due to its estranged steel production is upsetting the global steel market. Moreover, the methods China is opting, such as dumping its cheap steel, encouraging exports through incentives, to name a few; to tackle its problems is what’s more upsetting. Thereare also reports about investigation on China possibly trying to circumvent the anti-dumping duties imposed on it by re-routing its steel via Vietnam to the US.

2016 has been a whirlwind year when China’s actions are concerned. China’s GDP growth rate declined from 6.9% in 2015 to 6.7% in 2016, reaffirming the economic slowdown. Yuan averaged at 6.6/USD, up 6% y-o-y during Jan- Nov’16. From committing to production cuts to exporting the cheapest steel worldwide; from environment concerns and announcing coal production cuts to importing coal to fulfill requirement and tossing out all records, importing 1 billion tonne of iron ore; China’s 2016 paints a rather unoptimistic picture.

The enormous quantity in which China produces steel is judged as the main reason for its economic slowdown; that and its pollution problems. So it’s only reasonable that China has been trying to cut production. China announced 45 mnt of reduction in steel production in 2016; although, things don’t seem to be going its way. In fact, it is estimated that China’s steel production in 2016 will be 807 mnt, up 0.46% from 803 mnt produced in 2015.

Interestingly, according to the National Development and Reform Commission, China’s target to disengage 45 mnt in steel capacity this year was achieved by the end of October. So why is it that the production isn’t going down? An obvious answer presents itself in the already idle production capacities in the country. “About 74% of the 45 mnt of targeted capacity were no longer in production to begin with”, Economic Information Daily quoted China Iron & Steel Association party secretary Liu Zhenjiang.

China’s 13th Five-Year Plan (2016-2020) postulates removal of 150 million tonnes of steel production capacity. How much of it will constitute of the idle capacities remains to be seen.

China consumes about two-third of global seaborne iron ore. Over a year ago, iron ore giant Rio Tinto ramped up capacity banking on its forecast that China’s steel production will reach 1 billion tonnes by 2030, thus augmenting iron ore’s consumption. China is close to importing 1 billion tonnes of iron ore in 2016, over 6% higher than 953 million tonnes in 2015. However, recent reports suggest that Rio Tinto has disposed off its much optimistic forecast. Other major miners like Vale and BHP Billiton were of the same view and based their production increments in alignment with it. China’s steel production in 2016 will surpass that in 2015. Although, production peaked in 2014 at 823 mnt and has come down to 800 mnt since then amid the economic slowdown and is expected to hold at similar levels.

The 1 billion tonne import story comes together when we look at the domestic iron ore production in China. Domestic mining was cut out and compensated with imports since steel production did not take a step back. The domestic iron ore mining in the country has come down 8% y-o-y in 2016 to 1,260 mnt from 1,370 mnt in 2015. The lessened domestic mining has been a driving force for increased imports of the commodity.

China’s total coal output dropped 10.5% to 2.46 billion tonnes in the first nine months of the year compared to the same period in 2015, while imports have gained 15.2% to 180.18 mnt. In volume terms, China’s production is down by about 300 mnt in the first nine months of 2016, while imports are up by about 23 mnt. This shows that higher imports have only compensated for about 7.6% of the drop in domestic output.

Only recently the reports suggest that a few coal mines will be sanctioned to be operational a few extra days and produce more coal. It seems that production in China’s coal mines will be the most crucial in driving the seaborne coking coal prices, rather than the big exporters. How quickly the exporters can match China’s demand will seal the future of coking coal prices.

China exporting its steel is a sore subject in the global steel industry. Repeated urging, discussions and resulting friction have had no impact on its export of cheap steel. Resorting to protection measures such as imposing numerous anti dumping duties by US, Europe, India, MIP, safeguard duties and more, has not deterred the ountry from sending its cheap steel all around the world. In fact, finish steel export from China is expected to reach 111 mnt by the end of 2016, just a tad lower than 112 mnt exported in 2015.

Prices of HRC FoB China have gained 11% in the year to USD 372 from USD 334 in 2015, although that is largely attributed to the increase in prices of raw materials and, also partly because of a small increase in consumption from the housing sector.

The crux of the problem lies in China’s steel consumption. Back in the day, when China’s economy was caught up in a frenzied boom, consumption of steel was at its peak and China couldn’t get enough of steel production to satisfy the appetite of the construction and infrastructure sectors. The huge steel capacities built then are the problem now that the economy has slowed down. In 2016, steel consumption in China moved up to 677 mnt from 672 mnt in 2015, briefly supported by the housing and power sector.

As 2016 comes to an end, not much has changed in the Chinese steel industry. Steel exports are frivolous, consumption is unsupportive, coal production could catch up soon and iron ore import is attaining new levels. The rally in iron ore prices and the quickened pace of coking coal prices are temporary distractions from the larger problem of the steel slowdown courtesy China, that has got the global steel market in its grip.