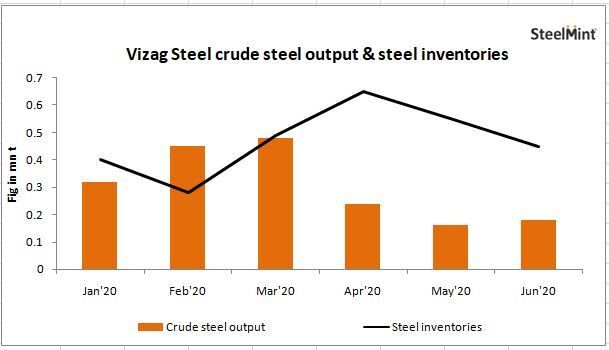 Vizag Steel Plant (VSP), whose holding company is RINL, has three BFs, each with a rated the capacity of 7,500 t per day (tpd) and around 2.5 million tonnes (mn t) per annum (total 7.5 mn t), but which can vary on account of shutdowns, maintenance etc. For instance, in the pre-COVID-19 era, RINL had even touched up to 18,000 tonnes per day in a few days.

Since the outbreak of the pandemic, the plant had initially shut down one BF since demand had almost gone out of the market. On April 13, it had to suspend operations in the second BF as well as domestic sales had almost touched rock-bottom and the inventory pile-up at that time was 7-7.5 lakh tonnes of steel at the plant.

The BF had been closed for four months and so the production will have to be ramped up gradually with maybe an initial 500 tonnes followed by another 1,000 tonnes and gradually the full capacity of up to 7,000-7,500 tpd will be reached in a week’s time, for certain, it is learnt.

However, the rated production can often be controlled keeping in mind the downstream and overall market scenarios.

In June, 2020, the company had notched up sales of 2.9 lakh tonnes, of which 1.2 lakh tonnes comprised exports. The steel PSU had actually targeted sales of 2.5 lakh tonnes in the domestic market alone in June, 2020. Thus, it fell a little short of achieving that target, at 1.7 lakh tonnes. But, going forward, RINL is upbeat that the demand scenario would become better.

As said an industry insider, “If the product doesn’t move, where will the next lot of material come from? Thus, the thrust on exports will continue for some time to bring in the cash.”