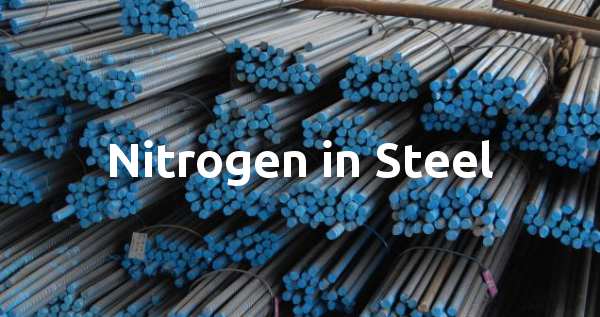 All steels contain nitrogen in traces, which improves the mechanical & corrosion properties of steel. Nitrogen would attribute these properties only if it remains in solid solution or precipitates as very fine & coherent nitrides. When nitrogen is added to austenitic steels, it can simultaneously improve fatigue life, strength, work hardening rate, wear and localized corrosion resistance. High nitrogen martensitic stainless steel shows improved resistance to localized corrosion, like pitting, crevice and intergranular corrosions, over their carbon containing counterparts. Because of this, the high nitrogen steel are considered as new promising class of engineering materials.

Nitrogen has efficient solubility in steel as a solid solution or as chemical compound. Nitrogen improves yield, grains size and mechanical properties on a Rebar. The percentage of nitrogen in Rebar is not more than 130 ppm. If increased further, the element will cause brittleness to steel.

Addition of Nitrogen in Steelmaking

There are various instances when nitrogen can be added to steel during steelmaking such as melting, the ladle processing and the casting operations. Sources of nitrogen in BOF include hot metal, scrap, nitrogen impurity in oxygen and nitrogen gas used while stirring. This table shows the amount of nitrogen present in each of the feed materials typically used

Behavior of Nitrogen in Steel

While steel is in molten form, nitrogen is well present in the solution. However, solidification of steel can result in three nitrogen-related phenomena i.e. formation of blowholes, precipitation of one or more nitride compounds and/or the solidification of nitrogen in interstitial solid solution. The maximum solubility of nitrogen in liquid iron is approximately 450 ppm and less than 10 ppm at ambient temperature. The other elements in liquid iron affect the solubility of nitrogen in the molten steel. More importantly, the presence of dissolved sulfur and oxygen limit the absorption of nitrogen because they are surface-active elements. This fact is exploited during steelmaking to avoid excessive nitrogen pickup, particularly during tapping.

Hardness is the resistance of a material to surface indentation. Hardness increases linearly with increasing nitrogen content. Nitrogen absorbed during steelmaking results in interstitial solid solution strengthening & grain refinement, both of which increases hardness.

The strength of LCAK steels decreases slightly in the beginning and then increases with increasing nitrogen. Conversely, the elongation decreases and the r-value increases with increasing nitrogen. The r-value is the average ratio of the width to thickness strain of strip tensile specimens tested in various orientations. It is an inverse measure of formability. Hence, high nitrogen content leads to poor formability of LCAK steels.

Strain ageing occurs in steels containing interstitial atoms, predominantly nitrogen, after they have been plastically deformed. After deformation, the nitrogen segregates to dislocations causing discontinuous yielding when further deformed. Not only does strain ageing result in increased hardness and strength, and reduced ductility and toughness, but it may also result in the appearance of ‘fluting’ or ‘stretcher strains’ on the surface of deformed material. Duckworth and Baird have developed a measure of strain ageing termed ‘strain ageing index’. This is based on an empirical equation to calculate the increase in yield stress when deformed material is held for 10 days at room temperature.

Limited amounts of nitrogen present as precipitates have a beneficial effect on impact properties. Nitrides of aluminum, vanadium, niobium and titanium result in the formation of fine-grained ferrite. Further, smaller the grain size, lower is the transition temperature, hence improved toughness. Therefore, it is necessary to carefully control, not only the nitrogen content, but also the form in which it exists, in order to optimize impact properties.