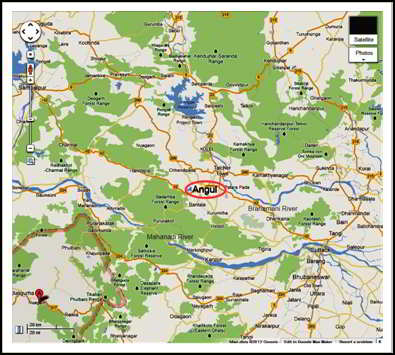 Angul is a small town in interior Odisha, some 100 km to the west of capital Bhubaneshwar; the district that surrounds it is also called Angul – a non descript district that you will perhaps not find in any geography books, leave alone in the glitzy tourist brochures. Geography books should have mentioned Angul, for it holds the distinction of being the hottest district in the country, where the maximum temperature goes up to 50oC during summer.

A recent study conducted jointly by IIT-Delhi and Central Pollution Control Board (CPCB) reveals that Angul is among the top 10 most polluted Indian cities.

Angul is not geographically destined to be the hottest. It is at 20.83°N latitude, further from the equator than Trivandrum (8.50°N), Bangalore (12.98°N), Chennai (13.08° N) or Hyderabad (17.36°N). Nor is its landscape bare rock that gets heated up in the mid-day sun; it is sandy with plenty of shrubbery and good tree cover; Angul is nestled in the lap of an array of forests – Khandapada, Satkosa, Badamba, Deogarh, Bamra-Gangpur, Budhabahal, Kendujar-Saranda, Harichandanpur-Telkoi and Kapilash, to name only the major ones.

Angul’s heat, and its humidity and black dust, comes from about 60 to 70 thousand tons of coal that is burnt daily in the thermal power plants in and around the district. And from the arc furnaces that these power plants fire, melting iron and aluminium for Bhushan Steel, SreeMetallics, Jindal Steel, NALCO, etc. I was told that the maximum temperatures within a radius of some ten kilometres around the power plants are about 4oC higher than the rest of Odisha, and rainfall about 30% less. Some sort of perma-steam ?