Steel360 Exclusive updates on Raw materials Industry
Home Stories Steel Where are the jobs in steel? 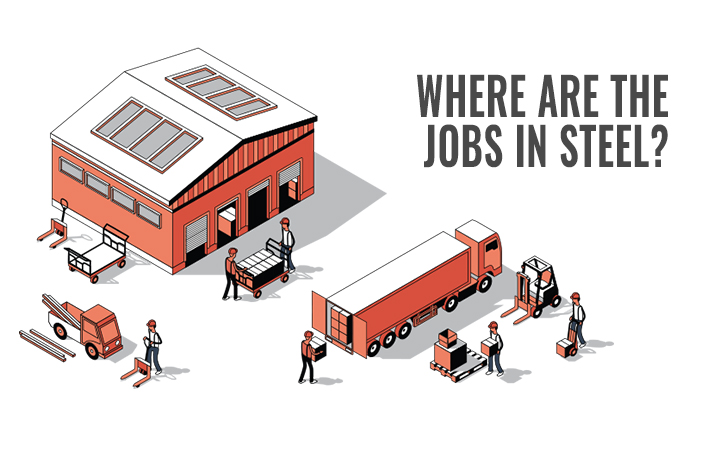 Are jobs stagnating in the steel industry despite a growth in capital investments in the sector? Can the steel sector absorb more labour, create job opportunities and scope for acquisition of skills?

As per the National Steel Policy, 2017, in India, the steel sector has an output multiplier effect of nearly 1.4x on GDP and an employment multiplier factor of 6.8x. Hitting that 300 million tons of anticipated crude steel capacity will require capital investments of about Rs 10 lakh crore by 2030-31 and this move is also expected to generate employment of about 36 lakh by this same period from the current level of 25 lakh, depending on the degree of automation effected through the adoption of different technologies.

However, the latest data from the Annual Survey of Industries, pertaining to 2016-17, offers some food for thought.

Only those sectors have been considered in the study where the average size of the factory is a fixed capital investment of INR1 lakh or more per unit. Here the largest share belongs to coke and petroleum, followed by basic metals in which steel constitutes nearly 90 percent. The survey reveals that the average number of employees per crore of rupees is the lowest in the coke and petroleum space, followed by basic metals. Studying the survey, Dr Susmita Dasgupta, Joint Chief Economist, Economic Research Unit, Joint Plant Committee (JPC), comes up with interesting deductions. “In fact, the larger the fixed capital, the lower seems to be the potential of the sector to absorb employment,” she infers.

The study further reveals that the iron and steel industry, which constitutes about 90 percent of base metals, is not too friendly towards employment. The numbers employed per crore of capital invested is among the lowest in the industry. Also, for base metals, productive capital as a percentage of fixed capital is lower than that seen in most industries, an indication that there is more of unutilised capacity. “Hence, the steel industry is over capacitated and absorbs less employment, informs Dasgupta.

In terms of net value added as a percentage of invested capital, base metal is the lowest which means its profitability is the lowest. “To put it more simply, the industry has falling profits and unutilised capacities and a low labour absorbing power. Taken altogether, this means, the iron and steel industry has almost exhausted its employment potential,” warns Dasgupta.

Interestingly, despite the low potential for employment, wages in the steel sector are among the highest, except for coke and petroleum refining sectors (Rs 3.5 lakh), at Rs 2.22 lakh annually. For the rest of the sectors, wages are lower, as per the study. “This means that steel has been able to exhaust almost the best talents available for the manufacturing sector and has little scope to attract new skills by way of offering higher wages,” Dasgupta rings a warning bell.

Productive capital as a percentage of fixed capital is less than 100 in the steel industry. Dasgupta says, this means there are excess capacities in the system for which employment is bound to stagnate.

Salaries as a percentage of value added is very low for the steel industry – an indication that larger investments in terms of rupees may not create employment to a commensurate scale.

“The ratio of wages to salaries is also among the lowest for the steel industry and this is a possible reason why there is less incentive for the sector to produce high quality of R&D; it means that the brighter ones are simply not incentivised enough to invest in their own skills,” Dasgupta avers.

Dasgupta dwells on the kinds of investments made in the steel sector and whether these can create jobs? She says, since most of the money spent in the steel industry is on new machines, the possibility of increasing employment is minimal. While there is often retraining or re-skilling done at the level of machine operations, little improvement has been effected in terms of skills related to metallurgy, heat management or fundamental engineering – because, she says, “these come already packed in the form of machines. This makes the investment-to-labour ratio rather high, a typical scenario of jobless growth.”

For instance, she illustrates her viewpoint through the entire steel-making process, which involves:

But is there scope for increasing the potential for employment in each of the above segments?

This segment involves technologies of extraction, beneficiation, evacuation and transportation. “Technology possibilities have been filled up in almost all these areas except in transportation and delivery. Transport planning, logistics, freight reduction and others may require data analytics of an unprecedented scale. There is also a need for analysis of mineral quality and pricing,” informs Dasgupta.

In fact, technologies and skills needed will be in areas of data analytics, logistic planning and mineral testing and benchmarking. Future employment will be created in such data parks, mega computers, laboratories and auction houses, she feels.

This process involves metallurgy of the blast furnace and SMS, rolling technologies, heat recovery, control of emissions and the integrating processes.

In the list of technologies mentioned above, solutions for each category have been well developed in terms of machines and equipment. “The only space for innovations perhaps lies in the blast furnaces and SMS because of the possibility of variations in the quality of raw material which might need a mix of complex mathematical modelling, metallurgy as well as IT intervention for smoother operations,” informs Dasgupta.

Integrating the various processes of steel-making may also need a detailed IT intervention.

This is one area where path-breaking technologies can emerge because it is guided by IT and data sciences. “In plotting warehouses, stocks, logistics, storage, transport and others, one can achieve a lot in the area of steel distribution,” she says.

Dasgupta, thus, feels not only is the employment potential for the steel industry full, it also means that within the steel facilities, there is less scope for an improvement in the quality of manpower. “The latter seems to be the typical instance of the thesis of Joseph Schumpeter – when an industry arrives at its peak of technology possibilities and plateaus out. It may well be a useless exercise to keep looking for growth in employment in the steel sector,” she emphasises.