Steel360 Exclusive updates on Raw materials Industry
Home Technology Next A Green Initiative: Use of Hydrogen in BFs 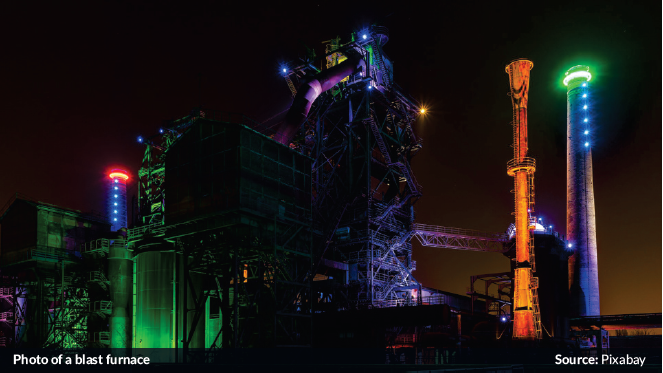 On November 11, 2019, ThyssenKrupp Steel Europe, sent out a press release which reported that the Duisburg-based steel producer had launched a series of tests into the use of hydrogen gas in a working blast furnace. They were path-breaking tests aimed at significantly reducing the Co2 emissions arising from steel-making.
This is the first time that a trial has been reported in an operating blast furnace. It is, therefore, a very significant event, and it could well be a “toddler’s first steps” towards a revolutionary development in making the iron and steel industry environment-friendly.
Blast furnaces use carbon from metallurgical coke and pulverised coal, about 500-600 kg per tonne of hot metal as the reducing agent for iron ore. In addition, the carbon is also the fuel for the process as it is combusted to generate the required heat. As a reducing agent, carbon participates in the process of removal of oxygen from iron ore to liberate iron from it. The result of this reaction is the formation of carbon dioxide (Co2).
Fe2O3 + 3 CO ? 2 Fe + 3 Co2

This Co2 is the major contributor from the iron and steel industry towards generation of green house gases in the world. It is estimated that Co2 emission from the iron and steel industry forms about 7-9% of the global Co2 emissions. The tests at ThyssenKrupp Steel Europe are an important part of ThyssenKrupp’s climate strategy to become climate-neutral to the extent possible, in the iron ore reduction reaction. This reaction generates water vapour instead of Co2:
Fe2O3 + 3 H2 ? 2 Fe + 3 H2O
The above reactions are highly simplified forms of complex interactions that actually happen inside a blast furnace.
ThyssenKrupp said in its release, “In the classic blast furnace process, around 300 kilograms of coke and 200 kilograms of pulverised coal are needed to produce a tonne of pig iron. The coal is injected as an additional reducing agent into the bottom of the blast furnace shaft through 28 so-called tuyeres. At the start of the tests today hydrogen was injected through one of these tuyeres into blast furnace 9. It marks the start of a series of tests in which Thyssenkrupp Steel plans to gradually extend the use of hydrogen to all 28 tuyeres in blast furnace 9 and then, from 2022, to the remaining three blast furnaces. The advantage is that whereas injecting coal produces Co2 emissions, using hydrogen generates water vapour. Co2 savings of up to 20% are, therefore, already possible at this point in the production process.
“Today is a ground-breaking day for the steel industry,” said Premal Desai, Chairman of Thyssenkrupp Steel Europe. “We are doing pioneering work here. The use of hydrogen is the key lever for climate-neutral steel production. Today’s test is another step in the transformation of our production which will culminate in green steel. At the same time, we see what is possible when business and government work together towards a common goal. We are very grateful to the state of North Rhine-Westphalia for supporting the project.”
The above reported initiative shows that the iron and steel industry has begun to move from research and simulations to plant trials: A significant milestone indeed!

The Continuous Search
Researchers in the steel industry have been looking for a solution towards reduction of Co2 emissions from blast furnaces for years. From the recent trial in ThyssenKrupp, it is evident that, as of now, the introduction of hydrogen has been limited to part replacement of the injected pulverised coal through the tuyeres. More trials may lead to increase in the percentage of hydrogen gas injection replacing pulverised coal.
Various studies and researches have been going on for years to find a way to reduce the dependence on metallurgical coke and coal in the blast furnace process. (2)J. Bilik, et al. have mentioned about the development of the injection of alternative fuels – deoxidising agents, into blast furnace tuyeres. Alternative fuels, mainly gaseous and liquid, bring more hydrogen into a blast furnace than metallurgical coke. 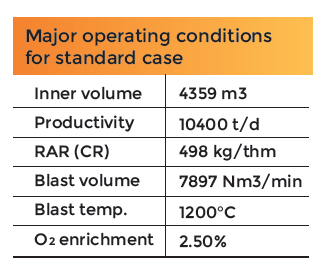 (3)Hiroshi Nogami et al undertook studies that performed numerical simulation of blast furnace operation with hydrogen injection through the tuyere.
The simulations were carried out under the conditions of constant bosh gas flow rate, adiabatic flame temperature (regardless of hydrogen injection ratio by adjusting blast flow rate and oxygen addition) and hot metal temperature.
In the study Hiroshi Nogami et al used a standard all-coke condition as in table 1
The maximum hydrogen content in the blast gas was about 43 mol-%. Simulation results under intensive hydrogen injection operation showed:

The findings of Hiroshi Nogami et al (2)suggest that the potential of hydrogen as a reducing agent in the blast furnace is promising without a doubt. However, the optimum extent of its replacement of carbon needs to be understood through trial and experience. 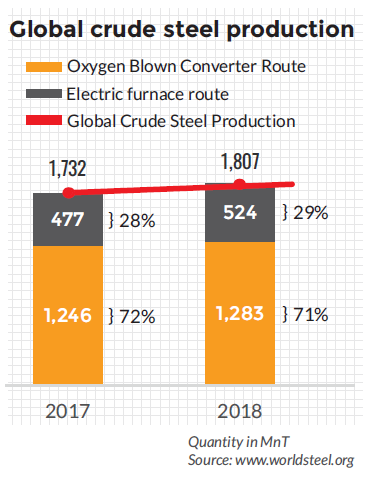 The world’s crude steel production is highly tilted towards the blast furnace route. The Oxygen Blown Converter route accounted for 72% and 71% of the global crude steel production in 2017 and 2018 respectively. The blast furnace is estimated to contribute 70-80% of the total Co2 emissions by the iron and steel industry. It is, therefore, clear that the focus on reduction of CO2 emissions in the iron and steel industry should be through the blast furnace route.
In the Indian scenario, the electric furnace route is dominant, helped by the widespread existence of induction furnaces: 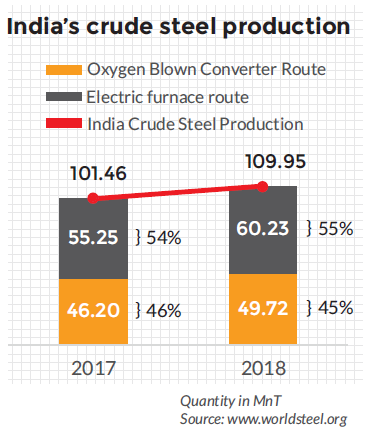 Though India’s production through the blast furnace route is less than that by the electric furnace route, CO2 emission from the steel industry is significant because of the presence of a large number of coal-based DRI kilns in the country. The coal-based DRI process also produces CO2. This DRI finds its way into the electric furnaces in India. India’s DRI production forms a significant portion (33%) of the global DRI production.
The Indian iron and steel industry’s contribution to CO2 emissions thus has two major sources: blast furnace processes and the coal-based DRI process. Of these, blast furnaces contribute more. 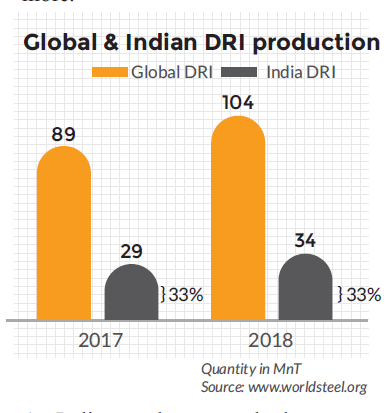 As India marches towards the target of 300 MnT per annum of steel production, hot metal production through blast furnaces and coal-based DRI production will increase a few fold. This will increase CO2 emission from the industry significantly. Development of green processes is thus the need of the day.

The author is a freelance steel technology consultant based out of Kolkata, India. He may be contacted at [email protected] or +919763777846