Liquid slag produced in a blast furnace (BF)is at a temperature of around 1500?C and has a sensible heat of around 400Mcal/ton. BF slag is rich in CaO, SiO2, Al2O3, and MgO which are similar to the components of Portland cement. When this liquid BF slag is cooled fast enough then the solidified slag has a large percentage of glassy phase with high cementations activity and hence it can be used in the production of BF slag cement.

However, water granulation of liquid BF slag consumes large volumes of water (1000-1500 litres of evaporative loss/ton of liquid slag processed) and can generate acid mist causing air pollution. Also,there is need of a proper water management on one hand and necessity of drying of the granulated slag on the other hand. So, not only the sensible heat of the liquid slag is lost, but it is also necessary to have an upstream slag drying unit for using the granulated BF slag in cement industry. Drying process normally consumes heat energy up to 72Mcal/ton of slag.

Dry slag granulation process is essentially to atomize the liquid slag and then to cool the particles rapidly so as to produce a glassy slag. Atomization is done using a rotary cup air blast atomizer (Fig 1). The particles cool as they travel through the air and are then cooled further in a fluidized bed. Both of these cooling processes provide the rapid cooling necessary for the formation of glassy slag product. Fluidized bed is a convenient method of containing the slag particles as it prevents the agglomeration of hot particles in addition to providing rapid cooling.

Rotary cup air blast atomizer operates by spinning out a thin film of slag which extends radially from the cup lip. As the film of molten slag extends from the cup lip, it breaks up of on its own accord.  However, the presence of an annular air jet around the cup assists the breakup of the slag by inducing unstable waves in the film. The air blast has the effect of producing small particles of a more uniform size and of deflecting the particles upwards to produce a cone shaped spray moving out from the atomizer.

Slag particles with a mean diameter of around 2mm can be produced by the atomizer and so the slag product is in a form which is easy to handle. Tests have shown that the slag particles are cooled fast enough for the product to have glass content in excess of 95%. Also very little slag wool is produced in the process. 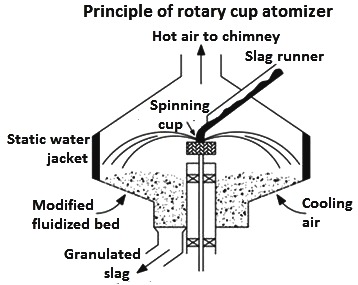 Dry slag granulation process is essentially to atomize the liquid slag and then to cool the particles rapidly so as to produce a glassy slag.

Heat is recovered from the slag in the following ways. 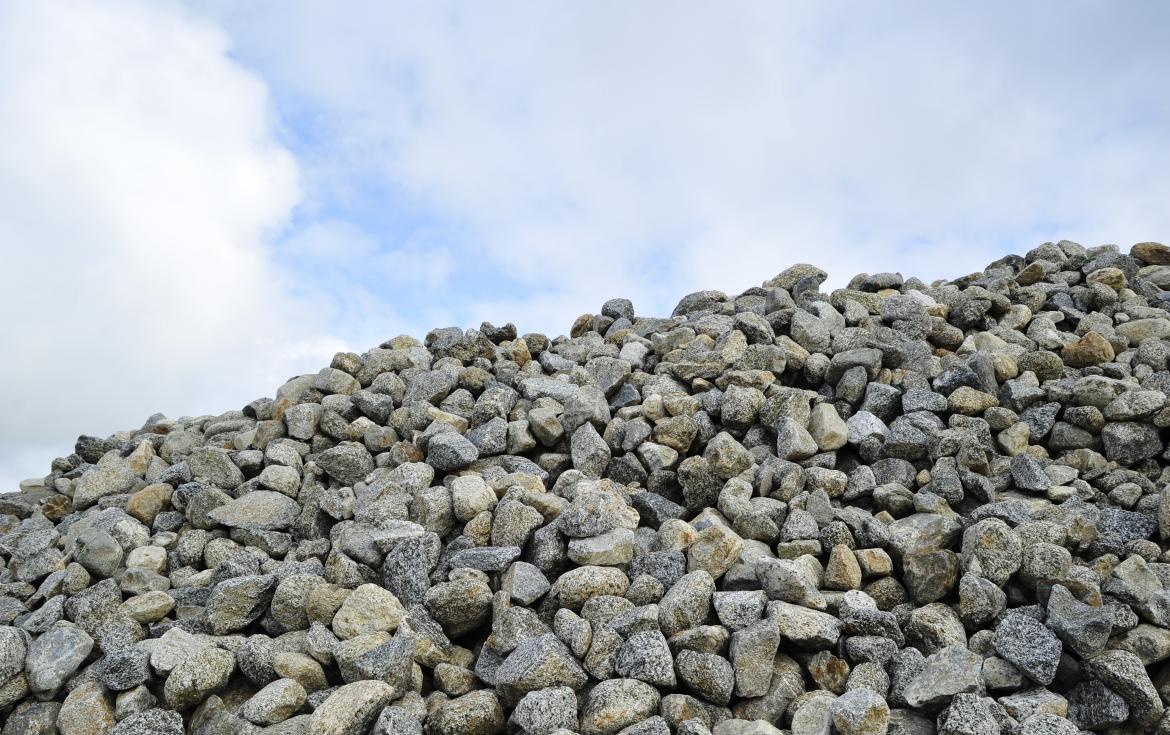 Experimental work was undertaken with the initial aim of investigating whether or not the atomization process can produce small slag particles and whether the particles had a glassy structure. A rotary-cup, air-blast atomizer was built, with a cup of 100mm diameter and a speed range of 500-1500 rev/min. The slag flow rates used in the tests varied from 0.2-0.5 kg/sec. The tests were restricted to duration of around 2.5min because of the limited capacity (around 30 kg) of the laboratory slag melting furnace.
The initial tests proved that the process did work and small particles with 95% glass content were produced. Further tests were then carried out to investigate the particle sizes and spray trajectories produced by the atomizer.

The sensible heat in molten slag relative to 30?C as it leaves the BF at 1500?C is around 400Mcal/kg. Of the total slag flow, around 14% would overflow the slag accumulator to waste as mentioned above. From the remaining 86%, all of the heat content cannot be recovered because of the following.

Thus, only 58.5% of the sensible heat content of the slag discharged from the BF can be recovered.

The main challenge of the dry granulation process is to ensure rapid slag freezing to reach the transformation point of the slag very fast. Otherwise the solidified slag is not fully glassy but partially crystalline which is unsuitable for further use in the cement industry. Cooling with air is much more difficult due to a substantially lower heat capacity compared with water used in conventional slag. granulation plants. Furthermore the air heats up while streaming through the agitated bed. So additionally the temperature difference worsens the setting process.

Initial campaigns showed promising results regarding glass content, grain size distribution and particle shape. Also a significant off-gas temperature increase could be measured. With the obtained data, process optimization can be done and a scale up for further investigations can be realized in the future. Using dry slag granulation at integrated steel plants will gain access to the sensible heat of the BF slag. The recovered energy can be used for the production of steam or electricity or for other useful preheating processes. An energy potential for recovering 20MW thermal energy or alternatively of about 6MW electric power generation from a slag feed of one ton/minute can be calculated. Without the need of an upstream drying system for the BF slag energy and as in consequence CO2 can be saved. In summary dry granulation of BF slag allows an environmental friendly and sustainable subsequent processing for one of the big heat recovery potentials at a modern BF. 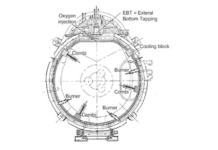 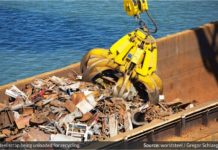 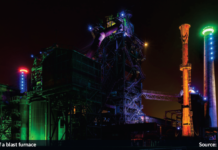 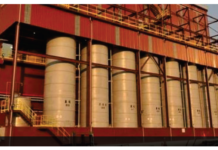